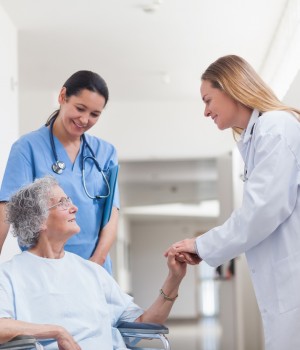 IN A FINDING that could turn readmission-reduction strategies on their head, a recent study shows that the behaviors of ED physicians and the hospitals in which they work “not hospitalists and discharge practices ” may have the biggest influence on readmission rates.

An article published online in June by the Journal of Hospital Medicine studied Medicare claims data from 2007 through 2011 for nearly 175,000 patients who visited an ED within 30 days of an index hospitalization in Texas. Researchers found a very wide variability in readmission rates across EDs and ED providers.

Among ED doctors, for instance, 14% readmitted 67% of the patients visiting an ED after discharge, while another 14% readmitted only 37%. The high level of variation by ED provider and facility was very surprising,”says lead author Siddhartha Singh, MD, MS, associate chief medical officer at the Froedtert & the Medical College of Wisconsin in Milwaukee.

The fact that there was a link between providers and readmission rates wasn’t the surprise. Dr. Singh had done previous research, published in the April 2014 issue of the Journal of General Internal Medicine, which found no link between readmissions and the obvious suspects: hospitalists. “Even though hospitalists influence metrics like length of stay, they have absolutely no influence on the readmission rates of patients they discharge,” he says.

Dr. Singh next looked at primary care providers, but a yet-to-be-published study showed no connection there. Only when he turned to the ED did he strike gold. Even after adjusting for patient and system factors, he found that readmission risk depended on which ED physician patients saw or which facility they went to.

“Today, readmissions are considered the responsibility of the discharging hospital,” Dr. Singh says. “Our paper suggests it’s an admission problem. Hospitals and providers should be influenced to admit fewer patients, and that would take care of the readmission problem.”

Who’s pulling the strings?
It’s clear from the study that ED providers are influencing readmissions, presumably through subjective clinical judgment, even without taking the facility in which they practice into account, Dr. Singh says. But when you add the site into the equation, a specific provider’s influence drops by two-thirds.
“When an ED puts into place certain policies and systems of care,” Dr. Singh explains, “that influences two-thirds of provider practice.” When ED facilities standardize care “think of developing a clinical protocol for pneumonia, for example “patients will be readmitted at the same rate, regardless of which doctor they see.

Or when facilities provide better access to such resources as case managers, social workers or a 24/7 pharmacy, that should likewise prevent more patients from being readmitted, no matter which ED physicians those patients see.

For-profit hospitals were also associated with higher readmission rates than non-profits (57% vs. 54%). Dr. Singh attributes that to a fee-for-service system that gives hospitals an incentive to admit (and consequently readmit) more patients.

He points out the study’s potential limitations: The research was limited to Medicare beneficiaries, so patients younger than 65 might have different diseases and systems of care. It was also limited to Texas Medicare data, which were chosen because one of the researchers had access to them. Patient populations and health care systems may differ by state.

However, Dr. Singh notes that study results are generalizable because of the large sample size, which included a variety of health care systems and patients, as well as robust research methods. “People should take a moment and compare the patients they see and their systems of care to those in Texas,” says Dr. Singh. “But they really should take these results very seriously.”

Making changes
Now that a connection has been made between providers and readmission rates, Dr. Singh says there are several next steps. “The study had the right mix of having an unexpected finding, but also one that we can do a lot with,” he says.

For one, researchers should delve further into provider influence on readmissions. “It’s a brand new aspect of research we have opened up,” Dr. Singh says.

“It’s very important for future research to find out what about the patient influences the physician in one direction or another.”

In addition, leaders need to consider what the findings mean for readmission policies, he says. “At a minimum, hospitals should standardize decisions in the ED, creating pathways for common diseases like CHF and pneumonia,” he adds. “So no matter which provider patients see, they get the same experience.”

He argues that the results should also put pressure on hospitals and policy-makers to improve the environment for ED providers and their patients, and to include ED providers on committees to make those improvements happen.

Dr. Singh has already successfully made that case in his own hospital. “The message I wanted to get across to our hospital is that when you look at our research, don’t think this problem will be solved by cracking the whip on ED providers,” he says. “You get a much bigger bang for the buck if you make changes at a facility level.”

He tapped into his hospital’s existing committees that look at inpatient, ambulatory and ED care, and service lines that cross them. The message was heard. Based on his study results, Froedtert Hospital is working to standardize ED care pathways for pneumonia, VTE and cardiovascular diagnoses as early as this month.

What you can do
Dr. Singh recommends that other hospitals consider standardization, developing guidelines based on the literature as well as in-hospital resources. To prioritize clinical areas, he suggests that hospitalists, ED physicians and primary care doctors give input on the diseases and conditions they see most frequently.

“There’s a lot of expert opinion promoting standardization of care, so it’s just a question of getting the work done,” he says.

Given hospitalists’ growing influence, Dr. Singh adds, they should actively support the effort. “Hospitalists not only treat the patients admitted to hospitals, but they also treat hospitals as experts in QI and systems of care.”

He hopes hospitalists will look at his research and start building partnerships and better relationships with ED physicians. “Say, ‘We’re in this boat together. How can we work together to solve this readmission crisis that our patients are facing?’ ”