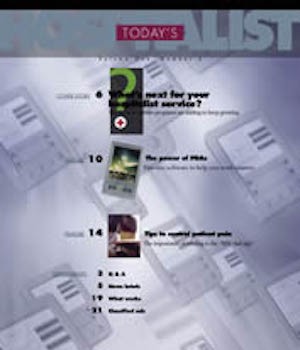 Published in the December 2004 issue of Today’s Hospitalist

In the time he has spent building and running hospitalist programs, Patrick J. Cawley, MD, has learned some valuable lessons about what it takes to grow “and maintain “an inpatient service.

In 1996, Dr. Cawley began building a hospitalist program at the Conway Medical Center in Conway, S.C. Within a year, the program had lowered its length of stay by nearly two days. Hospital administrators were thrilled with the cost savings, and physicians in the community liked the service.

Within about three years, however, the group realized that it had lost half a day of its initial gains in lowering length of stay. The group responded by lobbying hospital administrators to hire three nurses who could serve as case managers. The hospitalists argued that they needed help coordinating the various caregivers that patients saw both in the 160-bed hospital and once they left the hospital.

Within a year, the hospital hired two more case managers, and the hospitalists gradually clawed back their lost half-day.

“You’re always in that maintenance mode,” says Dr. Cawley, who is currently director of hospitalist services at the Medical University of South Carolina in Charleston.

Some programs focus on serving new roles within their hospital, taking over even more duties than had formerly been filled by community physicians. Others focus on such hard-to-measure but vital areas as care quality and patient safety, working to develop new treatment pathways and protocols for all physicians at the hospital. Still others look for ways to bulwark their relationship with the nursing staff.

Once the hospitalist group at Conway Medical Center got a handle on its length of stay, it decided to make quality and safety its touchstones. As Dr. Cawley explains, the program’s hospitalists figured that if they didn’t tackle these issues, no one would.

“It takes dedicated time to sit down and address what needs to be done to make sure quality improvement occurs,” Dr. Cawley says. “If you’re a doctor seeing patients outside the hospital, you don’t have that time.”

The program in Conway developed two clinical pathways: one for the treatment of pneumonia and another for cardiac care. For the cardiac pathway, the hospitalists had to persuade the community physicians to agree on which medications they’d use, and they had to ease a bottleneck at the emergency room’s electrocardiogram machine.

Once they addressed those issues, he says, “We saw pretty much all of our indicators improve. Door-to-EKG fell to less than five minutes. It became a very slick process.”

When Dr. Huddleston started the program in 1998, she worked mainly with patients on inpatient orthopedic-surgery units, looking after their medical problems. “Nobody wanted to work with them,” she says. “There were turf issues, medicine vs. surgery. But for me, working with the little old grandmas with hip fractures has been a goldmine.”

Dr. Huddleston brought in a second hospitalist in 2000, and the program has since grown to about 15 physicians. And while the hospitalist service still looks after orthopedic patients, it also staffs a transitional-care unit, works with anesthesiologists in a pre-operative clinic and provides a night service to handle overflow from the hospital’s resident services.

The next phase for Mayo’s hospitalists will be focusing on safety and quality issues throughout the hospital, Dr. Huddleston says. “We’re taking what we know works and making sure all the physicians do it.”

Robert M. Wachter, MD, head of the hospitalist program at the University of California, San Francisco (UCSF) and associate chairman of the medical school’s department of medicine, says that identifying local needs is key to the success of hospitalist services. A more mature program’s goals “depend on what’s working and what’s not at your hospital,” he says.

At the UCSF medical center, for example, one hospitalist recognized that physicians need help with end-of-life care issues and took the lead in creating a program focusing on that area. Another hospitalist, Kaveh G. Shojania, MD, has made attacking medical errors his mission.

(Drs. Shojania and Wachter worked on a federal report, Making Healthcare Safer: A Critical Analysis of Patient Safety Practices in 2001, available online. They have also edited a forthcoming book on the topic.)

“We’re trying to bring some of our academic work back home to improve safety,” Dr. Wachter says. He chairs UCSF’s patient safety committee, a group that has developed guidelines to ensure that appropriate surgical patients are receiving beta-blockers, and that all central lines are placed using ultrasound guidance.

And while many physicians are still reluctant to talk about their errors “Dr. Wachter says shame and fear of liability still inhibit a lot of frank discussion “the committee has worked to create an environment in which physicians will share their mistakes. He says that these types of discussions have been legitimatized in part by articles in Annals of Internal Medicine on the topic, as well as all the attention that organizations like the Agency for Healthcare Research and Quality have focused on the topic.

While he is proud of his group’s work, Dr. Wachter, who is one of the founders of the hospitalist movement, refrains from taking credit for having a master plan. “I don’t think you can say in year zero, ‘What we want to have in three years is a world-class program for end-of-life care,’ ” Dr. Wachter says. “I just hired really good people and gave them time and resources to make things happen.”

While hospitalist programs may take on different roles as they mature, quantitative performance measures can play an important role in that goal-setting, says Roger A. Heroux, a partner with the Colorado Springs, Colo., office of Hospitalist Management Resources, a national consulting group.

Mr. Heroux points to readmission rates “the number of patients who return to the hospital with the same illness within a short period “and denied days as two key measures. Because insurers monitor these measures closely “and may deny some payments they think weren’t warranted “hospitalist programs often take both of these measures into account from the start.

To track readmissions and denied days, however, hospitalists need access to detailed data on their patients, something that too few of them have. “In most every program we get involved with that’s having trouble,” Mr. Heroux says, “they don’t have data. They need to have both financial and clinical data.”

Once hospitalist programs can track readmissions and denied days, they can begin to do more refined analyses and assess factors like charges-per-discharge and the number of one-day stays at their hospital. That analysis can help set other goals accordingly.

With charges-per-discharge, the ideal is “selective use of resources,” not just a long litany of tests ordered by every physician who wanders into a patient’s room, Mr. Heroux says. As for one-day stays, hospitalists want to make sure that their hospital doesn’t have too many, compared with a baseline and, if the information is available, its peers.

“If that number is too high,” Mr. Heroux says, “hospitalists may be getting a quick dump of patients from the ER.”

Despite the utility of these sorts of benchmarks, less tangible “or harder-to-measure “data can also play an important role in a program’s goal-setting as it matures.

Stephen Houff, MD, president and chief medical officer of Hospitalists Management Group in Canton, Ohio, looks to all the usual yardsticks for the programs that his company staffs in Ohio, West Virginia, New York and Florida. But once a program hits its adolescence, he also wants to see good satisfaction ratings from all of the constituencies it serves “community physicians, nurses and, of course, patients. HMG measures these through surveys.

To ensure that referring physicians are happy, for example, “We might start talking about citizenship with our hospitalists, maybe encouraging them to get involved in blood-pressure screening at the hospital.”

Nurse satisfaction is also critical. “The primary capacity constraint on most hospitals these days is the number of nurses,” Dr. Houff explains. “We see the nurses as a precious resource. And nurses really like having doctors who don’t yell at them when they call. We’re not about to yell at nursing staff or throw things around. The hospital is where we live.”

“Hospitalists support and help educate the nurses,” he says. “Nurse retention has been shown to improve when you have a hospitalist program.”

Nurses aren’t the only people hospitalist programs need to strive to retain. They can’t afford to lose their hospitalist colleagues, either. After all, a high retention rate makes it far easier to hit other benchmarks because you don’t have to train new physicians.

But hospital medicine can be an intense and draining specialty, and burnout is a risk, especially for physicians in understaffed programs. That’s why Dr. Houff’s company staffs only hospitals that will pay to have a hospitalist on duty 24 hours a day, seven days a week.

“That way the physician can turn the pager off at night,” he explains. “That seems to be the key element. To be there 12 hours and take pager call all night is absurd.”

For Jeffrey Dichter, MD, head of the hospitalist program at Ball Memorial Hospital in Muncie, Ind., all the different possible goals for a more-mature program spring from a single simple idea: “The hospital is our office.”

Just as community doctors put in place systems and procedures that allow their practices to function more smoothly, treat patients more effectively and grow, so it is with hospitalists. “Hospitalists, as they develop stronger relationships in their hospitals at every level, become managers of the care systems throughout the hospital,” he says.

Put simply, they figure out what needs doing, and they do it.

Tim Gray is a freelance writer based in Philadelphia.