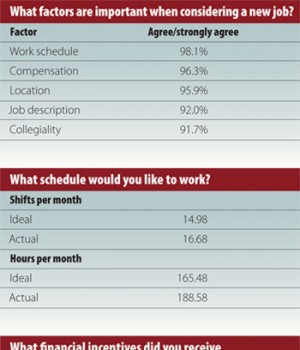 What factors do hospitalists find important when they’re looking for a job? According to the 2012 Today’s Hospitalist Compensation & Career Survey, compensation doesn’t top the list, but comes in instead below work schedule. Here’s a look at how full-time adult hospitalists rank factors in their job search, and the incentives that employers are offering.

What do doctors want?
The factor that hospitalists said was No. 1 in their job search was work schedule, with nearly everyone (98%) agreeing or strongly agreeing that it was important when looking at jobs.

A close second when it comes to assessing job opportunities was compensation, with 96% of hospitalists saying they agreed or strongly agreed that pay was key to their decision-making process.

Other factors included collegiality among a group’s members (92%), practice model (88%) and growth opportunities (84%).

Work hours
If work schedule is so important, what exactly are hospitalists looking for in terms of work hours? Data from our survey indicate that full-time adult hospitalists say they would prefer to work just under 15 shifts a month. On average, hospitalists currently report working closer to 17 shifts per month.

Put another way, while hospitalists say they would like to work 165 hours per month, they report working 189 hours. Hospitalists are working about 13% more hours than they would prefer.

Just over a third (37%) said they received a sign-on bonus averaging just under $15,000, and just under a third (32%) were given financial help with moving expenses worth an average of about $7,500. Another 12% received help with tail coverage, and 8% received loan forgiveness.