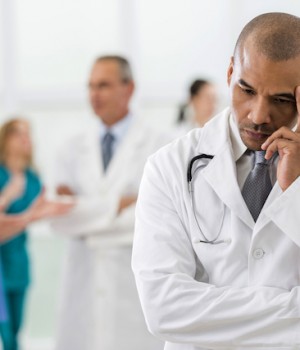 IT’S NO SECRET that for many physicians, work challenges lead to discontent and a search for greener pastures.

But according to Shalini Chandra, MD, MS, assistant professor of hospital medicine at Baltimore’s Johns Hopkins Bayview Medical Center, survey data indicate that the turnover rate of hospitalists is more than twice that of doctors in general, coming in at nearly 15%.

Part of the reason why is that demand for hospitalists is so high. Also, “hospital medicine is sometimes regarded as a launching pad for people to start their careers, even though they might not plan to become career hospitalists,” she says. “Hospitalists are also generally young, and they may not have planted roots yet in any one place.”

But Dr. Chandra wasn’t convinced that those explanations fully accounted for such high hospitalist turnover. She initially explored job dissatisfaction as the link between retention and turnover—only to find that despite their high turnover, hospitalists (at least in the literature) report high job satisfaction.

“Our motto is, ‘Don’t change what’s wrong. Change what matters.’ “

“We began to wonder whether hospitalists could have job satisfaction while having low morale,” she says. “Perhaps the answer to taming turnover was beyond satisfaction, and we were not asking the right questions.”

Morale, she explains, is not the same as job satisfaction. Instead, it is a more complex construct, of which job satisfaction is only one element. “Morale relates to how people see themselves within a group,” she says. “It is similar to ‘espirit de corps,’ and it includes a sense of the entire group climate.”

As Dr. Chandra notes, “When one group member is unhappy, that sentiment can easily transfer to her colleagues.” And when doctors leave as a result of low morale, the remaining clinicians may be “devastated,” which can erode morale even further and lead to even higher turnover.

How can groups stop that revolving door? In 2009, Dr. Chandra and her team began developing a hospitalist engagement and retention survey.

They have since used focus group and survey results to create a validated scale that measures hospitalist morale. They described that tool in the June issue of the Journal of Hospital Medicine, and Dr. Chandra has become the lead investigator of Hopkins’ Hospitalist Morale Team.

Developing the HMI
In 2009, the researchers organized focus groups that identified 47 potential drivers of morale. They then asked a panel of hospitalists how much each of those drivers contributed to morale.

Based on their analysis of the responses, they narrowed the questions to a 27-item/seven-factor survey called the Hospitalist Morale Index (HMI). In 2011, they administered the HMI to more than 100 hospitalists — including physicians, NPs and PAs — in academic and community settings across several states.

The HMI encompasses 10 domains: clinical, workload, leadership, appreciation and acknowledgment, material rewards, family time, institutional climate, job security, autonomy, and professional growth. (The survey contains additional elements for academic groups to fill out.) Hospitalists rate their personal importance of and contentment with variables across each of those domains.

Survey findings
Researchers found that each one-point increase in personal morale score was associated with an 85% decrease in the odds that a respondent would leave the group due to unhappiness. The higher the morale, the more engaged the hospitalist.

Overall, hospitalists who reported that they intended to leave had lower scores across all domains except workload, material reward and autonomy.

Among community groups, clinical work, leadership, feeling appreciated and acknowledged, job security, and institutional climate emerged as the main areas of dissatisfaction. Among academic groups, dissatisfaction with opportunities for professional growth was the key source of discontent.

As Dr. Chandra points out, the findings indicate that overall morale doesn’t tell the whole story, because the total percentage of unhappy academic or community hospitalists was almost identical. Additionally, the fact that hospitalists rate both the importance of and their contentment with each item is a unique combination that is the basis of what Dr. Chandra refers to as “our secret sauce” for why the HMI can provide insights.

Expanding the reach of the HMI
The HMI has now been used in multiple hospitals and partner hospitals in the Johns Hopkins Health System for several years, Dr. Chandra reports. “Our own turnover at Bayview is 8%.”

And as of July 2016, the Hopkins team has been inviting all hospitalist groups to enroll in their HMI program. For what Dr. Chandra notes is “a tiny fraction of the $500,000 it costs to replace a single hospitalist,” Hopkins researchers are implementing the HMI in client programs and providing a report that identifies target areas to help boost morale.

Once programs know which key factors are compromising group morale, directors can also enlist the Hopkins team to develop solutions and design interventions.

“Leaders are given a multi-level look at their program’s specific strengths and opportunities,” Dr. Chandra says. (Here is the contact e-mail for interested groups: hospitalistmoraleteam@jhu.edu.)

Program leaders have been surprised to learn what is really on their colleagues’ minds. In one program, for instance, hospitalist turnover remained high, despite increased material rewards. Using the HMI helped group and hospital leaders realize that once they took hospitalists’ importance rankings into account, the physicians were already happy with pay and benefits.

But they were unhappy because “group members craved more collegial relationships with consultants,” she points out. “Leaders were able to save dollars, better use their relationship capital and improve retention.”

Hospitalist programs are also using the HMI to monitor group morale on an ongoing basis via what’s known as HMI-SPIE (Survey-Plan-Implement-Evaluate). That’s a process improvement program in which the Hopkins team works with each group to strategize and implement interventions, then evaluate their effectiveness.

“Because morale is dynamic, SPIE tracks how issues change over time,” says Dr. Chandra. “The cycle of process improvement is to measure, make changes, measure those changes, make further ones and measure again. It is like a patient’s pulse: It cannot be taken only once during a hospital stay.”

On the horizon
Dr. Chandra’s team also plans to administer a survey for group leaders to compare their assessment of morale to that of their members. “We want to enable leaders who may not have time to be out on the floor to find out what group members are frustrated about.”

Another avenue she and her team plan to investigate is whether certain interventions work better with certain populations of hospitalists. “Either way,” says Dr. Chandra, “our motto is, ‘Don’t change what’s wrong. Change what matters.’ ”