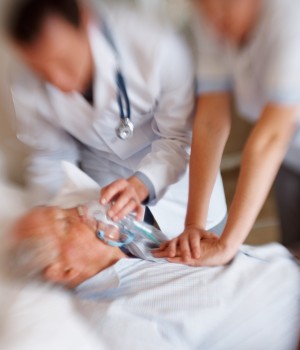 ONLY ONE IN FOUR people who suffer a cardiac arrest in the hospital is resuscitated and survives to discharge, according to the American Heart Association. Those numbers are significantly lower than the survival rates for patients resuscitated outside of hospitals, although data reveal little difference in long-term survival rates between the two groups.

If those statistics by themselves weren’t somber enough, hospitals have a whole new reason to pay attention to resuscitation efforts. Beginning this year, hospitals must publically report 30-day mortality rates for acute MI, heart failure and pneumonia as part of the CMS’ value-based purchasing program. That means there couldn’t be a better time for hospitalists to optimize their rates of resuscitation success.

So what can hospitals “and hospitalists “do about it? At this year’s Society of Hospital Medicine annual meeting,  one session focused on myths and missteps in cardiopulmonary resuscitation.

Jason Persoff, MD, a hospitalist, nocturnist and assistant professor of internal medicine at the University of Colorado Anschutz in Aurora, Colo., told hospitalists that they need to break some bad habits and unlearn procedures that have no merit. He also shed some light on correct techniques that experts have shown can actually help boost survival.

Continuous compressions
Key to CPR success “in fact, the most important factor, by far “are chest compressions. They need to be started immediately and continued with as few (and the shortest) stops possible.

Compressions need to be done quickly (at least 100 per minute) and hard (pressing more than two inches), and they must permit complete chest recoil. They also may need to continue for 20 minutes or more.

“If done perfectly,” Dr. Persoff said, “continuous chest compressions fail to compare to normal cardiac output, but they are better than nothing. When done imperfectly, they do nothing at all. Chest compressions are the foundation of all you do.”

That’s where hospitalists come in, acting as coach and referee during the code and making sure compressions are being done right.

“If you stop for just a couple of seconds, the pressure drops off,” he explained. “So we don’t want to interrupt chest compressions, even for ventilation.”

Studies have found that when compressions per minute drop below 87, “we have a sudden drop-off in patient survival,” he noted. And “hands-off” time, he added, has a lasting effect. “When compared with high-quality chest compressions, interruptions of as few as 15 seconds can have a negative impact, including worse outcomes hours after successful resuscitation.”

The sooner the shock, the better
To decrease “hands-off” time, said Dr. Persoff, researchers have looked at what happens when rescuers continue compressions during rhythm analysis, defibrillator charging and shocking.

“We’ve learned that any rescuer in contact with a patient during defibrillation will share a portion of the energy delivered, so it’s best not to deliver the shock while someone does compressions,” he pointed out. But it is better to keep compressions going during the charging period, removing hands only to do a quick rhythm analysis and shock. This new technique is expected to be included in the next resuscitation guidelines being developed by the American Heart Association, which should be published by the end of the year.

In addition, Dr. Persoff advised, doctors don’t need to worry too much about what the patient’s rhythm is before making that decision to shock.

“The sooner we shock patients, the better,” he said. “I would rather shock than not. If they are actually in v-fib, this is the only curative therapy that will work.” And if patients’ rhythm is something other than v-fib, shocking them will either have no harmful effect or potentially could precipitate torsades, which still could be reversed by subsequent electrical therapy.

Ventilation
Contrary to popular thinking, stopping compressions to ventilate patients during the early stages of CPR is not a good idea.

“If we overemphasize airway,” said Dr. Persoff, “we end up decreasing the amount of compressions patients get, and those compressions are what circulate the blood.” In addition, physicians risk over-oxygenating patients, and patients who get hyperoxia during resuscitation have worse outcomes.

Aside from lowering the compression rate, bagging or intubating patients can also interfere with patients’ ability to “gasp.” That happens most frequently soon after a patient collapses, but it decreases with the passage of time.

Research published in the Dec. 9, 2008, issue of Circulation found that “gasping markedly improves resuscitation,” he said. “If you have someone gasping, their survival to hospital discharge is 28%. If they are not gasping or we stop them from gasping, their survival is more like 7% or 8%, which is pretty dramatic. Let the patient gasp by using a non-rebreather to deliver oxygen as opposed to aggressive use of the bag-valve mask.”

Adding ventilation to compressions is also best done at least five minutes into CPR, according to research published in the February 2010 issue of Resuscitation. And a study published in the Jan. 16, 2013, Journal of the American Medical Association found that patients with conventional bag-valve masks have better survival rates than those with intratracheal intubation, at least during the early stages of CPR.

“Stopping chest compressions to insert an airway is not a good idea,” Dr. Persoff said. The exceptions are in pediatrics and primary respiratory arrest. “And remember, always stop CPR when the patient shouts ‘Ouch!’ for the second time. The first ‘ouch’ doesn’t count.”

Can stress-dose steroids improve resuscitation?
TO IMPROVE RESUSCITATION, one group of researchers has been looking at the potential role of steroids. Their results, while limited, show considerable promise.

“The good news is that a drug combo may have some evidence behind it,” according to Jason Persoff, MD, a hospitalist, nocturnist and assistant professor of internal medicine at the University of Colorado Anschutz. “The bad news is that all the studies have been performed by one researcher in one institution, and they have not been duplicated elsewhere.”

Dr. Persoff, who spoke at this year’s annual meeting of the Society of Hospital Medicine, said that a team of Greek researchers publishing in the July 17, 2013, issue of the Journal of the American Medical Association gave patients a drug cocktail of 1 mg of epinephrine, 20 units of vasopressin and 40 mg of methylprednisolone.

Their data show that those patients had a much improved “survival to hospital discharge with favorable neurological status” than patients injected with epinephrine and saline during CPR. In addition, patients who were still hemodynamically unstable after being successfully resuscitated received 300 mg of IV hydrocortisone for seven days and were gradually tapered off.

As Dr. Persoff explained, the number needed to treat to save one person was “only eight.” That makes the team’s use of steroid therapy nearly as effective as aspirin in preventing acute MI, he said.

Moreover, none of the mainstays of medical management during CPR “epinephrine, amiodarone and vasopressin, each used alone “has been shown to “save lives,” although they do improve short-term return to spontaneous circulation.

“Is it one of the drugs in particular?” Dr. Persoff asked. “Or is it the combination? We don’t know. But it’s pretty impressive.” His recommendation: “Implement this with the caveat that we just don’t know yet.”