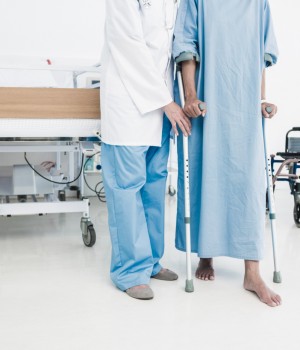 GIVEN HOW MANY HOSPITALISTS are involved in orthopedic comanagement for patients with elective knee and hip replacements, you’d expect there to be a pile of evidence showing that hospitalists get patients out of the hospital faster and keep costs down.

But very few studies have looked at hospitalist comanagement for elective orthopedic patients. And in the latest research, posted online in October by the Journal of Arthroplasty, hospitalists didn’t fare so well. “Any potential benefit of a hospitalist co-management model for this patient population may be outweighed by increased cost,” concluded the authors, all orthopedic surgeons at Ochsner Clinic Foundation in New Orleans. Ouch!

But the study “is not an indictment of hospitalists at all,” says lead author George Chimento, MD, Ochsner’s chair of orthopaedic surgery and section head of adult reconstruction and joint replacement. “It was the system that we had set up that didn’t get the desired result.”

“There was too much variability in the coverage, particularly on weekends.”

That system has since been overhauled, and the problems that were unearthed in the study are a thing of the past. Still, the results indicate that there are right and wrong ways to go about comanaging orthopedic patients.

Mandatory comanagement
In April 2012, Ochsner implemented a new policy whereby all elective knee and hip replacement patients “even those without comorbidities or chronic illnesses “would be comanaged by the hospitalists. Before that policy took effect, Dr. Chimento notes, “We had established a good preop clearance process with our anesthesia department, and we consulted with the hospitalists on patients when needed.”

That arrangement worked well, he adds, so why make hospitalist comanagement for all elective patients mandatory? Dr. Chimento isn’t sure, having inherited that arrangement. “My guess,” he says, “is that the thinking was: If a little is good, more would be better.”

But it didn’t work out that way. In the study, researchers retrospectively compared the costs and outcomes of elective knee and hip patients who were managed by hospitalists vs. nonhospitalist management. The data they analyzed ranged from May 2010 ” before hospitalist comanagement became automatic, when patients were still being managed by orthopedic residents and attendings “and January 2014. That was more than a year after the new comanagement policy took effect.

The hospitalist and nonhospitalist cohorts had the same readmission rates. But the hospitalists ordered more tests and racked up more hospital costs. They were also more likely to discharge patients to a skilled nursing facility than to their home.

The problem of new diagnoses
The hospitalist cohort did have a significantly lower length of stay (three vs. four days). But as Dr. Chimento points out, he and his colleagues chalk much of that benefit up to how pain management techniques and transfusion medicine had evolved over the study period, not to hospitalists’ care.

“We made changes in our multimodal pain control and regional anesthetic techniques that really got patients up and moving more quickly,” says Dr. Chimento. The surgeons had also started using topical tranexamic acid, which lowered transfusion rates and likewise helped patients get out of the hospital sooner.

The study also found this significant difference between the two cohorts: The hospitalists made significantly more new diagnoses during admissions than their nonhospitalist colleagues. That, says Dr. Chimento, can be a real liability because many new diagnoses could be considered complications.

“If someone has symptoms of hypovolemia, that could be coded as acute kidney injury,” he notes. “Once the code is in the chart, it’s next to impossible to undo “and acute kidney injury is definitely considered a complication by Healthgrades and other hospital rating systems.”

Revolving door of clinicians
So what was going wrong? According to Dr. Chimento, hospitalist comanagement for all elective knees and hips produced a revolving door of different housestaff, attendings and nurse practitioners, all with variable experience and expertise with postop patients.

“There was too much variability,” he says. “That variability was particularly acute on weekends.”

There were cases where a patient “would have a fever of 101 the night after surgery, and a full-blown sepsis workup would be ordered “with the word ‘sepsis’ entered into the chart for what is usually postop atelectasis,” he notes. “The system we had put in place just didn’t work.”

Fortunately, that entire system has since been changed. Blanket hospitalist comanagement for all elective knees and hips was rescinded in early 2014, and Ochsner reverted to its previous policy: having elective patients managed by the orthopedic department, with hospitalists called to consult only as needed. And now, only a small group of hospitalists provides all of those consults.

In their study, Dr. Chimento and his colleagues found that before hospitalist comanagement became automatic, hospitalists were asked to consult on 13.8% of elective orthopedic cases. He estimates that the number of hospitalist consults for elective patients has since gone down, due to another innovation the orthopedists and anesthesiologists put in place.

“We developed a series of Standardized Clinical Assessment and Management Plans (SCAMPs), which are clinical pathways that we follow before consults are called,” he notes. “Previously, if someone’s blood pressure was elevated, we’d consult hospital medicine. Now, we’ll try various things first to reduce blood pressure and consult only if we can’t get the hypertension under control.”

And since the study period ended, pain management, anesthesia and early mobility techniques have continued to evolve so that the orthopedic department has dropped its length of stay to under two days for both elective knees and hips. Now, 80% of patients are discharged home the day after surgery.

Mapping out consults ahead of time
Because lengths of stay are so much shorter and surgery schedules are frontloaded to the beginning of the week, very few (if any) elective patients remain in the hospital over the weekend. “And we drastically decreased the number of patients we send to skilled nursing,” says Dr. Chimento. “Our readmission rate is also going down a bit.”

With elective patients, the orthopedic department now often determines ahead of time who will need a medicine consult. “We meet every Monday at 6:30 a.m. to discuss the patients coming in that week to head problems off,” says Dr. Chimento. “We map out their social and medical needs.” Both surgeons and anesthesiologists attend those meetings, as do physical therapists, home health, case managers and social workers.

“The hospitalists do a very good job, and they help us manage some very complex patients,” he says. “But the type of comanagement we used to have in place just didn’t provide the continuity we needed.”