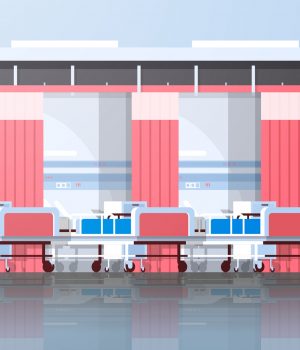 BACK IN 2005 when I became a hospitalist, the specialty was still in its infancy. Community primary care doctors and residents ran the house, and there were formidable barriers to market entry.

The biggest hurdle was an upside-down balance sheet. Then, as now, hospitalists just couldn’t generate enough revenue—those 99232s and so on—to cover their own salaries and expenses. Additional funding was needed to make their budgets work. Enter the so-called subsidy. Hospitals agreed to cover the gap between hospitalists’ revenue and their expenses, and that number has always been huge.

According to the Society of Hospital Medicine’s 2018 State of Hospital Medicine Report, hospitalists on average currently lose $176,657 per year when you compare their professional service fees to their compensation. Things get a lot worse when you load in benefits and practice expenses like support staff and malpractice.

Like spare change in a Mason jar, the hours you save in length of stay add up to a lot over time.

Now, no competent health care executive is going to fork out that kind of cash without getting something in return. And that initial something? Reduced length of stay (LOS).

DRGs
Hospitals get paid by the diagnosis-related group or DRG, a parallel universe to the professional services fees that pay your salary. You might, for example, drop CPT code 99222 for an H&P for community-acquired pneumonia, and your primary diagnosis will probably be something like ICD-10 code J18.9 (“pneumonia, unspecified organism”).

Your hospital, in turn, takes that same ICD-10 code and bills insurance for DRG 195, which is “simple pneumonia and pleurisy without a complication or comorbidity (CC) or a major complication or comorbidity (MCC).” That charge covers all the other resources needed to care for the patient including nursing, respiratory therapy, lab and medications, just to name a few.

DRGs represent fixed payments, regardless of actual resource utilization or length of stay. For DRG 195, Medicare expects an average LOS of 2.6 days, and it pays $4,193.25 for the whole kit and caboodle. (That’s the national payment amount; your reimbursement may be more or less, depending on location. That amount is also different for commercial insurance and Medicaid.)

If a patient stays less than 2.6 days, your hospital effectively makes money. Longer LOS does just the opposite: You lose money by chewing up resources without receiving any additional payment. And that’s where shrewd hospitalists saw financial opportunity.

Financial lever
For decades, community doctors rounded in the morning before clinic. If a patient wasn’t ready for discharge, she would stay another 24 hours. The cycle would repeat itself every morning until the patient was finally released.

Hospitalists argued that they would reduce LOS by discharging patients whenever. No need to wait until the next morning; noon or 4 p.m. will work just fine. Like spare change in a Mason jar, the hours saved should add up to a lot over time. In fact, they should more than cover the subsidy.

This all sounds ridiculously obvious and intuitive unless you lived through it. At the time, the whole thing was revolutionary and dangerously speculative. It also could have ended really badly by alienating the community providers the hospital depended on for business.

And it worked
As you might have gathered given the job you now have, the gambit worked. Hospitals’ financial pro formas were eventually followed by a raft of peer-reviewed studies conclusively proving LOS reductions.

For example, a systematic review published in the January 2012 issue of the American Journal of Managed Care demonstrated that hospitalists reduced length of stay by 0.44 days on average compared to non-hospitalists. That’s about 10.6 hours, which is material but not necessarily mind-blowing.

But let’s play things out. Assume you care for 100 patients with garden-variety pneumonia over the course of a year. You’ve suddenly avoided 1,060 hours of hospital care. Stop and let that sink in. That’s equivalent to eliminating 44 days of 24/7 nursing, plus everything else that bedded patients need.

Resource utilization isn’t perfectly linear—you order a lot of stuff in the first 24 hours—but some napkin math gives you a sense of the dollars involved. I put the financial gain at around $71,000 in Medicare money for those 100 cases of pneumonia. Extrapolate that to your entire census and you offset the subsidy and then some.

How soon they forget
But hospital administrators, unless they’re of a certain age, are oblivious to this history. And they’re probably browbeating you over the subsidy. Take a few minutes to remind them how we wound up here. They’ll still hate the subsidy, but they don’t have great alternatives. Community primary care doctors abandoned ship long ago—and that course was financially ruinous anyway.

I am the medical director of a 100-hospitalist multisite HM program, and I hope you can clarify an important piece of information: Does the $176,657 number in the 2018 State of Hospital Medicine Report not include benefits and practice expenses?  I couldn’t find it stated as such in the report, but it’s possible that I missed it.

You’re a very perceptive reader! No, that number probably doesn’t include benefits and practice expenses. It’s a crude estimate, basically salary minus professional service fees collected. Benefits add at least 40% (I’m self-employed, so I probably have a better handle on that than most doctors). Practice expenses could be narrow (such as malpractice) vs. broad (care coordinators, your share of hospital overhead, etc.) Hope this helps.

Interesting article. Part of our identity as hospitalists was (& hopefully still is) not only grinding faster, but also improving quality, safety, & value. Is that still part of the vision? Does administration value that? Here’s hoping…