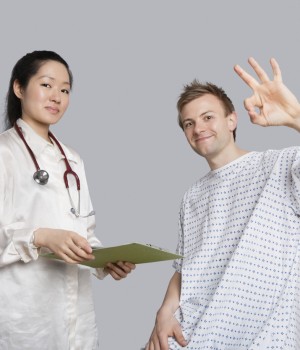 CAN A HOSPITAL improve patient satisfaction scores simply by giving physicians feedback about how patients rate them? According to survey results published this summer, the answer may be that it’s not only possible, but probably easier than most people think.

Patients were surveyed in the hospital by undergraduate volunteers, a longstanding practice at the hospital. But historically, residents have received feedback about patient scores and comments only twice a year. During the study period, patient comments were emailed directly to residents, who were given feedback from about 10 patients during a seven-month period in late 2011 and early 2012.

Researchers examined satisfaction scores for four questions: Would you recommend this hospital to your friends and family? And during your hospital stay, how often did doctors treat you with courtesy and respect, listen to you carefully, and explain things in a way that you could understand?

The study was published in the August 2015 Journal of Hospital Medicine. It found an 8% overall improvement in patient satisfaction scores compared to residents working in the rest of the hospital. The highest gains were seen in two areas: explaining things in a way that patients can understand and recommending the hospital to family and friends.

Gaurav Banka, MD, the study’s lead author and a cardiology fellow at Reagan, notes that individual feedback was not the only strategy researchers used. Each month, three residents who scored more than 90% on overall satisfaction and had patients voice exceptional comments about them were recognized in an e-mail sent to the entire department. They were also rewarded with a movie package, which consisted of two tickets to a theater, popcorn and a drink.

Dr. Banka says the study is of particular interest because it’s the first published research that looks at ways to raise HCAHPS scores. He spoke to Today’s Hospitalist about the research.

What did you think the challenges would be in changing patient satisfaction scores?
Our data had shown that before the research, the hospital’s internal medicine group (the group studied) performed poorly on at least one of the questions, which was how well physicians explained things to patients. I think that was due to the patient population these physicians see: We often have the sickest, most complicated patients with chronic diseases that are not easily fixed or explained.

We also thought the fact that these patients were more likely to come through the ED could make their overall satisfaction more difficult to change. Patients coming in for elective surgeries, for example, have a different experience than patients coming for emergent conditions.

How did satisfaction scores change for individual questions?
The biggest effect was on patient communication. In terms of patients responding that their doctor always explained things in a way that patients can understand, the residents in our study saw their scores improve by 8.1 points, while scores for the rest of the hospital, among doctors not being given more immediate feedback, improved by only 1.5 points.

For two other questions “patients reporting that their doctors always listen carefully and doctors always treat them with respect and courtesy “there was a trend toward improvement, but it was not statistically significant.

But I believe that if we had had a larger sample size, we would have been able to show a stronger change on those two questions.

The biggest surprise was a significant increase in the number of patients who said they would recommend the hospital to others. Physician communication is one part of patients’ overall experience in a hospital, but it is only one part, so we were surprised that our intervention was associated with such a big increase in overall satisfaction with the hospital. This study suggests a strong correlation between physician-patient communication and overall satisfaction with the hospital.

What strategy was more important, feedback or incentives?
I think feedback had the bigger impact. Being e- mailed patient satisfaction scores made residents more aware that we were tracking patient satisfaction. That sent the message that patient satisfaction is an important metric. The positive reinforcement from getting this feedback was helpful, because physicians saw that the little things they did with their patients made a big difference.

You tracked improvement among residents. Do you think similar efforts with practicing physicians, who are fairly cynical about HCAHPs, would produce similar results?
I think cynicism with HCAHPs is not limited to practicing doctors. Even residents have some resistance to embracing patient-physician communication. If anything, I think practicing physicians may be more interested in boosting their patient satisfaction scores, especially if patient satisfaction affects the size of their practice and referrals.

Could other centers replicate this effort? Most of the data-gathering in your study was done by volunteer undergraduates. That has some people wondering if this model is transferrable to other settings.
This is something you could have any hospital volunteer or hospital employee work on, including local high school students. There’s a large number of people who want to volunteer and help hospitals in some way, and this is one avenue where you can channel volunteers with little to no medical experience productively.

It’s a very low-cost initiative. Or alternatively, you could have nurses or nursing assistants take over the information-gathering component.

Doctors can be resistant to change, but if you show them the data, they will internalize the message. I think this is ultimately an important part of patient care that is underappreciated.