I’VE BEEN STUCK on a revenue cycle jag for my last few columns. I’m going to continue that thread this month and explore charge distribution. But don’t turn the page! That may not sound very scintillating, but your livelihood literally depends on it.

Benchmarks
Hospitals use a variety of management metrics, and industry benchmarks loom large.

The MGMA publishes widely-used practice benchmarks. Your employer is likely an MGMA member, which means your group’s salary and productivity data are put into a massive database every so often. Those numbers get mashed up with data from other hospitals and turned into benchmarks that are then published. Data are also available via a Web portal called MGMA DataDive.

Both you and your group are generally measured against this.

Charge distribution
Productivity, of course, depends on the CPT code you drop for each encounter. There’s a big difference—1.86 RVUs or $66.75—between a 99223 and a middling 99222. In my experience, providers tend to leave money on the table by systematically undercoding, probably due to the mistaken belief that billing conservatively reduces their audit risk. Reality check: It doesn’t.

How do hospitalists generally charge? Here, too, benchmark data are available, although it takes some work to find and interpret them. The Centers for Medicare and Medicaid Services (CMS) publishes large files that summarize how providers charge by specialty. The numbers for 2016 aren’t out yet, so I’m using 2015 data.

Hospital medicine isn’t called out specifically because the CMS doesn’t know which internists (or pediatricians or family physicians) work as full-time hospitalists. (That uncertainly should be ending now: Starting this month, doctors can choose to use the new CMS specialty designation for hospital medicine.)

I generally grab the data for internal medicine, assuming that most hospital charges were probably submitted by hospitalists. We published this chart in my December 2016 column, but it’s worth presenting again. 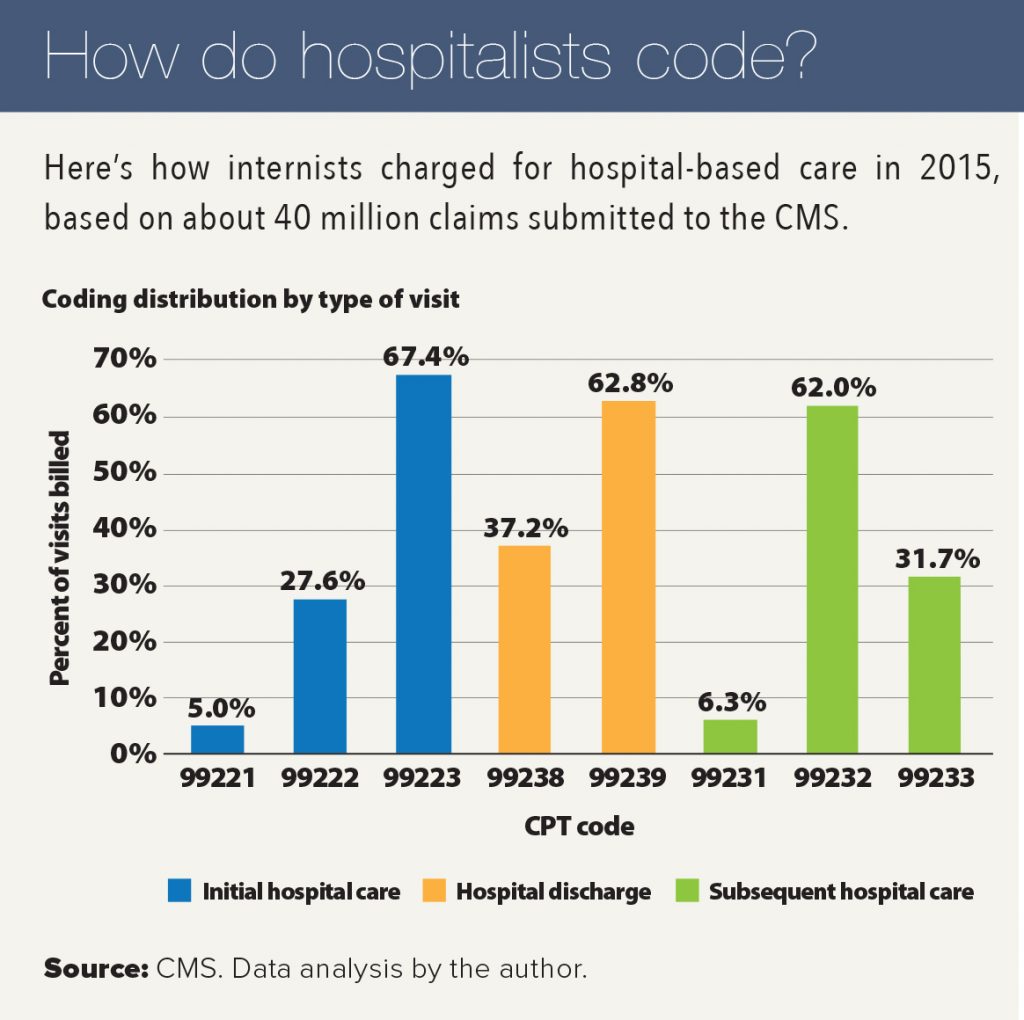 Dollars lost and gained
If your charge distribution differs from the CMS benchmarks, you’ll come out ahead or behind, depending, although not in ways that are completely intuitive. Let’s assume you code low 10% of the time, punching through 10% of visits at a level lower than they should be. What’s the resulting hit in revenue? According to my analysis, it’s 3.4%. 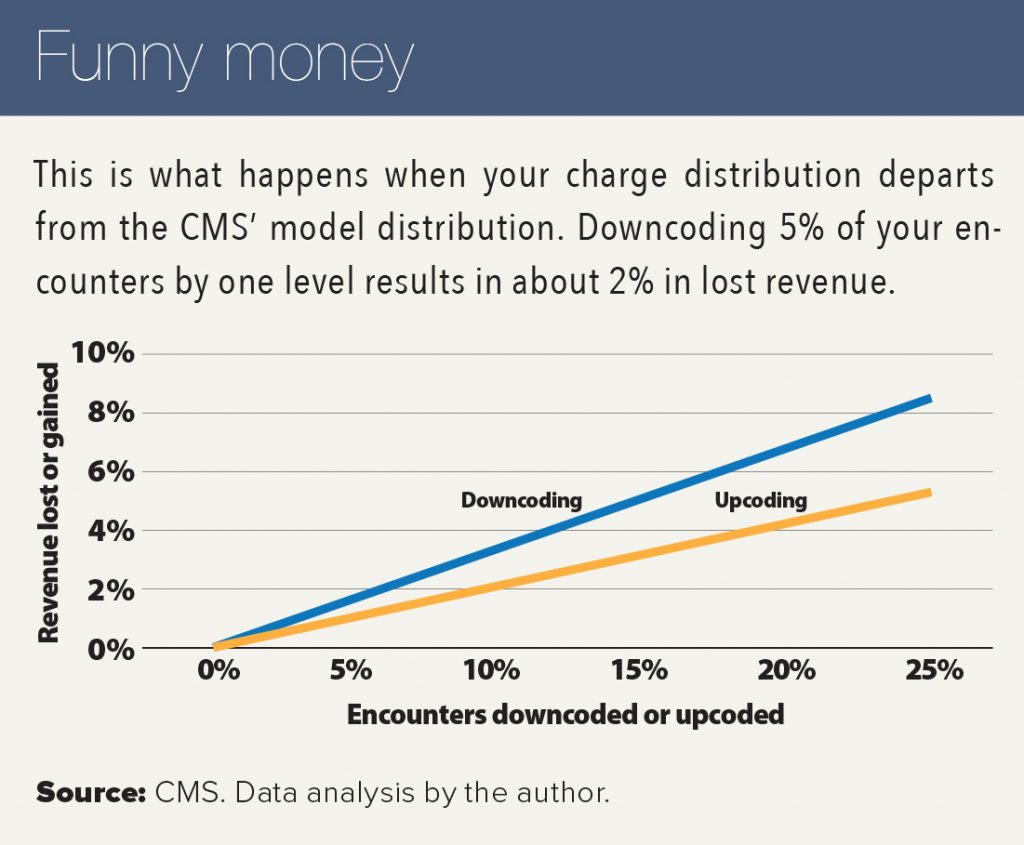 You’d assume that upcoding by 10% would have an equal but opposite effect, but that’s not the case: The revenue gain is only 2.1%. Sure, prolonged services are an option, but you can’t use those often without inviting institutional and regulatory scrutiny.

As you can see from the “Funny money” figure, you have more downside risk than upside opportunity; right-sizing charges that are inappropriately low yields more revenue than looking for incremental dollars in encounters already at benchmark. Remember, your review of systems, physical exam and medical-decision must meet medical necessity. You can’t just document more because you want to bill higher.

Every penny counts
Is it worth your while to chase that 2% to 3% in revenue? In this case, the answer is a clear “yes.”

According to the MGMA, the normative loss for hospitalists is currently $179,410 per FTE per year. For all the talk about payment reform, we’re still living in a fee-for-service world, and hospital medicine is way underwater. The revenue associated with your work is a lot less than your salary and expenses, and your hospital needs to pony up the difference.

So, yeah, 2% matters. Your hospital might spot you if you were in the black by, say, 7%. But no competent administrator will let a money-losing service keep on bleeding dollars due to sloppy coding.

What you can do
Back to your livelihood: I’d suggest getting the charge distribution for every member of your hospitalist group and then doing an internal comparison.

I’d also suggest comparing your group’s charge distribution to that of the CMS. Look for areas where you appear to be undercoding—like too many 99231s—and drill down to root causes. Are your patients not very sick? Are you farming out too much to consultants? Or do you need to improve your documentation to better capture actual care? Try to get a handle on it, and fix what you can.

David A. Frenz, MD, just put his career on pause. He was most recently vice president and executive medical director for North Memorial Health Care in Robbinsdale, Minn. You can learn more about him and his work at www.davidfrenz.com or LinkedIn.

Excellent presentation and simple. Did you notice any difference in this coding pattern for university institutions vs. community, given high CMI and more complex patients? How is the reimbursement going to be different with teaching services (additional RVU value)?