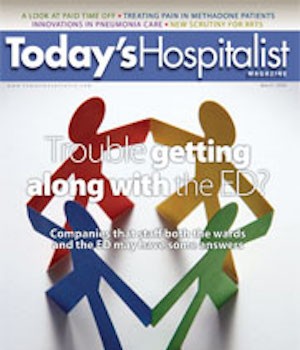 Published in the March 2009 issue of Today’s Hospitalist

When hospitalist Harjot Kahlon, MD, was worried recently that an emergency department (ED) physician had made an inappropriate admission, he didn’t air that concern through the usual channels. Instead of taking the complaint up the chain of command within the administration, Dr. Kahlon “the hospitalist director at Flagler Hospital in Flagler Beach, Fla. “went straight to the ED director.

That’s a far cry from his previous position with a private hospitalist group, where he would have had to turn to hospital administrators to act as referees. Even when issues around a questionable admission would be cleared up, the situation would have created bad blood that would further deepen the fault lines between the two departments.

Dr. Kahlon says that hospitalists and ED physicians at Flagler are comfortable talking with each other largely because they all work for one company: Dallas-based EmCare. In fact, one reason why he was drawn to working at Flagler was that as employees of the same company, he and his ED colleagues would have to come up with joint solutions to throughput and handoff problems.

“I was tired of having patients dumped on me who were, at times, inadequately worked up,” Dr. Kahlon says. Because of the collegiality fostered between both groups, he adds, touchy subjects, such as concerns that individual doctors may not be performing up to par, are more easily addressed. “That would have been unthinkable if we were working for different companies.”

Firms that specialize in dual staffing and management now recognize that they can do something that individual hospitalist groups can’t: use their knowledge of ED systems to hold both sets of physicians accountable for the same quality and clinical standards, and to reward them accordingly. As a result, some companies are using shared incentives as a carrot.

“We’ve taken the theory of synergy and made it a reality,” says Chris Frost, MD, vice president of hospital medicine and clinical excellence for TeamHealth, a leading staffing and management company, “because we hold both camps accountable for patient outcomes.”

From education to order sets
Dual staffing and management is a business model offered by such entities as EmCare, TeamHealth, which is based in Knoxville, Tenn., and the Schumacher Group, based in Lafayette, La.

Schumacher, for example, has 150 ED contracts nationwide and supplies hospitalists for 12 of those hospitals. And among TeamHealth’s 113 hospital medicine programs, roughly one-third have TeamHealth physicians in the ED.

For physicians employed by these companies, togetherness starts at joint company training sessions. Physicians meet not only with colleagues from their own specialty, but join together with their ED or hospitalist counterparts to go over such topics as handoffs, cycle time, diagnoses and clinical pathways.

Both sets of physicians are armed with shared order sets and protocols on issues like acute MI, pneumonia treatment, DVT and COPD exacerbations. TeamHealth, for instance, provides a standard definition of a stable patient for all of its divisions. When a patient comes in with a heart rate greater than 110 beats per minute, Dr. Frost says, hospitalists know that they will automatically be asked to come down for an evaluation.

To further eliminate guesswork and conflict, Team- Health also provides a handoff tool to both its emergency physicians and hospitalists. The checklist transmits information during transitions from the ED to the hospitalist, between hospitalists during a change of service, and from the hospitalist to the primary care provider.

According to Dr. Frost, the tool helps relieve some hospitalist concerns that a patient hasn’t been adequately worked up. “The checklist,” he points out, “ensures a standardized conversation for each handoff.”

Required meetings
Much of the hammering out of hospital-specific expectations and protocols occurs onsite as a result of mandated meetings between hospitalists and ED physicians, or at least their medical directors.

“It’s amazing to us the number of times we enter a building and there is a lot of friction between the ED and the hospitalists,” says Jay L. Arnold, EmCare’s chief executive officer for inpatient services. “It all originates around misunderstanding of each other’s expectations. The reality is that each group can easily complement the other.”

Joint meetings have produced solutions like triggers to help unclog jammed EDs and metrics to reduce mistakes. Some companies like EmCare fill in gaps through standardized bridging orders for the top 10 or 20 most frequent diagnoses to help the ED reduce variance in care until a hospitalist is available.

Sometimes, meetings between the two groups produce simple but effective solutions. At one meeting at the 400-bed Hollywood Presbyterian Hospital in Los Angeles, TeamHealth hospitalists came up with a plan to relieve the expected rush in the ED during pneumonia and flu season: They made sure all the ED physicians knew the wireless phone number of the hospitalists working the admission shifts.

“We said, ‘We know you’re busy, so if you get backed up, call this number and we’ll always be ready,’ ” says Arinder Chadha, MD, medical director of the hospitalist program. The contingency plan included arranging for more hospitalists to round and facilitate discharges, freeing up beds. “We would consider stationing one of the hospitalists in the ED to take charge of the holding patients so the ED provider doesn’t have to manage them.”

Shared meetings led TeamHealth physicians in another hospital to devise a rapid admit protocol to reduce door-to- bed time from a high of six hours. The emergency physicians and hospitalists examined the hospitalists’ top admission diagnoses to identify which diagnoses and clinical scenarios lent themselves to expedited throughput.

They then developed a protocol in which the hospitalist would be contacted once it was determined that a patient required admission. If the hospitalist isn’t able to initiate that admission within 20 minutes, the patient is transferred to the floor and seen by the hospitalist there.

According to Dr. Frost, this allows hospitalists to finish other crucial tasks, such as morning discharges or multidisciplinary rounds “but not at the expense of creating a logjam in the ED for patients waiting for admission orders.

The team also established vital-sign criteria to help determine a patient’s eligibility for the rapid-admit process. If a patient’s vital signs fall outside those agreed-upon parameters, hospitalists evaluate him or her in the ED before the patient is transferred to the floor.

Shared expectations
The in-hospital meetings are combined with national meetings, e-mails and newsletters to create what Mark W. Harris, MD, TeamHealth’s senior vice president of the emergency medicine division, calls a “lateral relationship” “one that eases the usual tension.

Although there’s technically no peer review between the two physician groups, face-to-face meetings give doctors a forum “with the medical directors present “to bring up concerns from both camps. Issues might include a patient who returns to the ED after discharge, a rapid response team called within 12 hours of a patient getting to the floor, or a patient who needs a transfer to a higher level of care within 12 hours of ED diagnosis.

According to Dr. Chadha, the meetings help identify solutions more quickly “and accurately “than having to go through hospital-administration channels. Often, the person who is the cause of the problem is sitting in on the meeting and can come up with innovative solutions.

The collaborative approach also benefits hospital administrators, Dr. Frost points out. “They don’t have to serve as a third-party mediator between the hospitalists and emergency physicians.”

Shared incentives
Some companies offer groups or individual physicians incentives that reward the results of working together. Physicians, for example, might be rewarded for scoring above the mean in how fast chest pain patients move through the system.

Schumacher, for example, looks at what teams and individual physicians accomplish on shared incentives, such as core measure compliance, patient and hospital-client satisfaction, and documentation completion.

William “Kip” Schumacher, MD, Schumacher’s CEO and founder, says that in one hospital, reducing the door-to-doctor time to get the patient seen from 45 to 15 minutes can result in an increased hourly rate for physicians.

“We focus the dollars on a particular metric or group,” he says. “It often turns into a home run in reducing length of stay.”

Performance results are tallied on scorecards, in Schumacher’s case, by each facility’s medical director and reported monthly.

“You get an incentive bonus at TeamHealth every quarter based on RVUs generated,” Dr. Chadha says, “and that can only happen when you work as a team.”

Proving their point
While the consensus is that having hospitalists and ED physicians work for the same group leads to positive clinical and financial outcomes, data to prove it are still being gathered.

EmCare surveys all of its physicians every six months. The company also measures how well the hospitalists are communicating with nurses, including those in the ED and the ICU; entry-to-bed time; diversion hours per month; capacity issues; transfers to critical care; LOS; and cost measures. Its baseline data already show that hospitalist and ED physician satisfaction are better than they were before EmCare ran both departments.

Even without hard data, these companies are getting more calls for dual programs (See “Improving care and the bottom line,” this page.)

Providing a united front also gives both groups more political capital, says TeamHealth’s Dr. Harris. That helps them push such issues as setting guidelines to make it easier to get subspecialists to admit patients or improving ED throughput.

Improving care and the bottom line

For companies that provide both hospitalists and emergency physicians, business is not just good. It’s great.

“We have seen an increase in the number of hospitals asking for both programs,” says Chris Frost, MD, vice president of hospital medicine and clinical excellence for TeamHealth, an ED staffing and management group based in Knoxville, Tenn., that began staffing hospitalist groups in 1993.

He attributes the interest to hospitals seeking to enhance patient care while improving their bottom line. The synergies created between the two physician groups, he says, improve both core-measure performance and throughput.

Part of that push comes from the growing complexity and acuity of patients, says Donna Landry, assistant chief operating officer of the Schumacher Group, which is based in Lafayette, La., and staffs and manages both EDs and hospital medicine groups. Those factors have led hospitals to pay more attention to continuity of care from the emergency department to the inpatient setting.

While this has increased the demand for hospitalist programs in hospitals where Schumacher doesn’t have the ED contract, Ms. Landry says that interest in the dual programs from existing ED clients has more than doubled in the last three years.

Dallas-based EmCare, which has staffed EDs for 30 years and hospitalist programs for 10, is touting its “Synergies” program as one that can unjam the bottlenecks it’s seen in the ED. Like TeamHealth, EmCare says it is now responding to repeated requests for combined hospitalist-ED programs.

At this point, the companies say, the toughest part is finding enough hospitalists to fill the increasing number of slots.