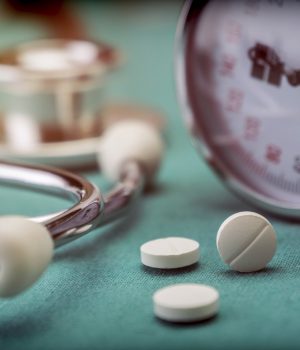 AS A PRIMARY CARE PROVIDER who has practiced hospital medicine in the past, Timothy S. Anderson, MD, who’s with the University of California, San Francisco, has an unusual perspective on patients who go into the hospital with well-controlled hypertension, only to be discharged on an intensified regimen of antihypertensives.

“You see people in the clinic who have had their medications changed and are having falls or dizziness from low blood pressure,” Dr. Anderson says. “But on the inpatient side, we also see folks with really high blood pressures, and we don’t always know what the right course of action is for them because we don’t have a lot of evidence.”

That dual perspective helped spur Dr. Anderson and several colleagues from UCSF and the San Francisco VA Medical Center—including some hospitalists and inpatient and outpatient geriatricians—to author research that was published in September by The BMJ. In their retrospective analysis, the authors combed through VA pharmacy data on nearly 15,000 inpatients who’d been treated for hypertension as outpatients and were hospitalized for non-cardiac conditions.

“You see people in the clinic who have had their medications changed and are having falls or dizziness from low blood pressure.”

Why so quick to treat?
The study also uncovered this disturbing fact: There was no difference in intensification rates at discharge between patients who might really benefit from tight blood pressure control—patients with a history of MI or of cerebrovascular disease, or renal disease—and those least likely to benefit, including patients with limited life expectancy, dementia or metastatic malignancies.

So why are doctors so quick to treat elevated blood pressures in the hospital and at discharge? For one, says Dr. Anderson, “there is certainly the issue of continuity and cross coverage. If someone calls in the middle of the night with a high blood pressure reading, our reflex is to treat the number.” Also, order sets may contain blood pressure thresholds that are automatically treated once those are crossed.

And “we are very well-trained to think about high blood pressure as being dangerous, which it certainly is in the long term,” he points out. “But it’s much less clear if having one or two high blood pressure recordings in the hospital is such a bad thing.”

Often, Dr. Anderson adds, doctors making decisions about blood pressure treatment are “responding to numbers in real time.” But “it helps to think about high blood pressure as a chronic disease playing out over the course of months or years.”

That’s why the researchers used VA data. They wanted to make sure the patients in the analysis had the lion’s share of their outpatient care in the same system as their hospitals and that those records were available to inpatient physicians.

“Having a system that doesn’t let us know what patients are doing in the outpatient setting may be the barrier that risks overuse,” says Dr. Anderson. But given his study findings, it appears that having access to those outpatient data didn’t really figure into doctors’ decisions to intensify antihypertensive treatments at discharge.

No inpatient guidance
Compounding the problem is the lack of any real inpatient guidance. Strong guidelines exist for managing blood pressure in patients hospitalized for heart and brain conditions. But “the gap is in patients hospitalized for other reasons, whether it’s routine surgeries or pneumonias or other common conditions,” Dr. Anderson explains. “There just are not data out there.”

Further, trying to extrapolate from outpatient guidelines on blood pressure management to the inpatient setting “is risky,” he says. That raises the question: Should physicians in the hospital be tweaking outpatient regimens for chronic diseases?

Dr. Anderson points out that being hospitalized is “potentially a rich time for data collection.” Hospital pharmacists can do a thorough medication reconciliation, for instance, and inpatient doctors have more time than doctors during an outpatient visit to identify regimens that aren’t working.

But a hospitalization, he adds, “is really a snapshot in time, while elevated blood pressure is a long-term risk factor.” While it’s important to communicate with outpatient doctors to make sure patients’ higher blood pressure in the hospital is checked after discharge, “we don’t necessarily need to treat it in the middle of other illnesses.”

According to Dr. Anderson, “there is likely some threshold when we do need to treat, but what that threshold is and what the best approach to treatment might be are unknown. Patients whose blood pressure is truly through the roof probably deserve treatment, but the vast majority of the patients in our analysis had blood pressures in the 150s, 160s and 170s.”

Intensification and outcomes
To try to answer some of these questions, Dr. Anderson and his colleagues are now starting the follow-up research he says is needed to find out what patients’ clinical outcomes are when their hypertension therapy is intensified at discharge.

“Once that piece is better established, that will help us form interventions,” he says. He suspects that—unlike now, when doctors just seem to treat a number— there won’t be any one-size-fits-all solution to deciding whether to intensify blood pressure treatment.

Instead, “for patients in their 40s whose blood pressure is running really high, we may want to increase their antihypertensives in the hospital and make sure they are connected to a primary care doc,” he says.

“They may actually benefit from that treatment path.” But for patients in their 70s or 80s who are frail and/ or have polypharmacy, “we know they are already at high risk of problems after they leave the hospital. It may be a good idea to note that their blood pressure was high to their primary care physician, but not actually act on it during their hospital stay.”