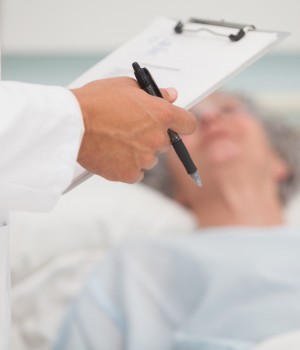 IT’S ONE OF THE TOUGHEST patient populations that hospitalists deal with: older patients who, because of age and comorbidities, carry a huge burden of function and psychosocial issues on top of medical problems. Often, these patients are hard to discharge “or they leave the hospital with less mobility than when they came, making a stay in an extended-care facility necessary.

Yet in 2004, when a geriatrics consult service was first proposed to work directly with the hospital medicine group at Methodist Hospital in Indianapolis on such patients, some hospitalists were skeptical. They were leery about interjecting more consults into patient care.

“In some hospitals,” says John A. Botkin, MD, one of the service’s early hospitalist champions, “consult services end up adding more noise and lengthening hospital stays, resulting in what should be outpatient tests.”

But fast forward to a study published in the November 2009 Journal of the American Geriatrics Society (JAGS), which looked at results of that service between 2004 and 2007. A whopping 96% of the group’s hospitalists rated the service as “excellent” and said it helped them provide better care. Needless to say, the consult service “also know as the Acute Care for Elders (ACE) team “continues.

“Geriatrics excels at more nebulous aspects of caring for older patients, not the nitty-gritty treatment of medical illness,” Dr. Botkin says. “Many people don’t recognize how important these aspects are and how they add up to providing better care.”

Fast activation
When the ACE team was launched in 2004, the service worked with only two hospitalists to identify eligible patients. Since then, the service, which consists of one staff geriatrician and one nurse practitioner, has been extended throughout the 800-bed hospital and is used by all 22 hospitalists.

A big factor in the service’s success is that ACE team members are brought in almost immediately, says Dr. Botkin. While hospitalists can call a traditional geriatric consult for a patient with delirium, the ACE team is activated when the admitting hospitalist checks a box on the general admission order set.

“That patient is automatically added to the list for a visit from the service the next day,” says Dr. Botkin.

The team’s geriatrician assesses the patient’s physical and cognitive function and mood, as well as gait assessment, as part of a comprehensive neurologic exam. The nurse practitioner interacts with other hospital- based personnel: social workers, pharmacists, rehab therapists and the floor-based care managers in charge of discharge planning. Within a day, the service may be ordering physical therapy, for instance, or phoning family members in California “tasks that Dr. Botkin may not get to for several days.

“When I’m spending 45 minutes managing acute illness,” he explains, “the service saves me another 30 minutes making sure the patient won’t be left alone at home after discharge.” Just as importantly, he adds, the early intervention helps prevent functional decline.

“If patients come in walking but leave not walking and have to go to a nursing home, obviously that’s a bad outcome,” says Dr. Botkin. “But it’s also an expensive outcome, and it usually means that they stay in the hospital longer.” According to the JAGS study, the length of stay and cost per patient seen by the service were either the same or lower than for patients the service did not treat.

Staking out turf
Another big plus: The ACE team is only two members, not a large geriatrics service. As a result, hospitalists and team members develop a great working relationship.

Even more importantly, the service’s role is clearly delineated. While the hospitalists focus on acute medical problems, the consult team targets function and psychosocial issues. The team also has the autonomy to proactively begin speaking with patients’ families to ensure a safe home situation or plan a nursing-home transfer.

“They’re allowed to take the reins quickly,” Dr. Botkin points out, “and don’t have to contact me to say, ‘Would you mind if I speak with the family?’ ”

But there are areas where the roles of hospitalists and the ACE team intersect. According to the JAGS study, the consult team in 2007 found delirium in 41% of patients consulted, depression in 37%, dementia in 36% and malnutrition in 35%. (Gait instability topped the chart at 92%.) Many team recommendations address drugs that hospitalists have ordered that may make patients more confused or induce other side effects.

“They might point out that I’ve ordered clonidine, for instance, which isn’t a good drug for the elderly,” Dr. Botkin says. “But they always defer to our judgment because, medically, we may feel a drug is appropriate even if it isn’t the best geriatric choice.”

While Dr. Botkin says he hasn’t “punted off” all social issues to the consult service, the collaboration has sharpened his knowledge of prescribing for the elderly and of the importance of paying attention sooner to problems affecting discharge and mobility.

“Ultimately,” he says, “the service’s goal is to train hospitalists to think the way they think for complicated social issues.”

Making it work in community hospitals
When the consult service was first launched, team members held daily multidisciplinary meetings with the two hospitalists involved in the pilot.

Now that the service is being used by all the hospitalists, who together field a daily census of between 180 and 200 patients, Dr. Botkin says, it’s not practical to get together and run the daily patient list.

Instead, the geriatrician leaves a note in the chart if there are no serious problems. “If there are,” Dr. Botkin says, “the geriatrician or nurse practitioner picks up the phone and says, ‘This is what I think needs to happen.’ ”

While Dr. Botkin says he finds the service indispensable, he knows that hospitalists in many community hospitals don’t have access to a geriatrics team. In such facilities, he thinks it would be valuable for hospitalists to at least look for functional and social red flags on admission: weakness, fall risk or, because of disease complexity, a complicated discharge.

Finding a nurse practitioner with geriatric training or background would also be a huge plus for a community hospital, he adds. But even without that expertise, says Dr. Botkin, “With criteria set up to triage patients, care managers could be brought in to help doctors identify high-risk patients.”