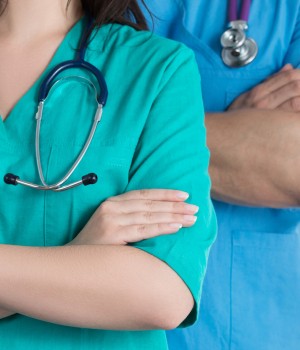 Here’s one of the things I have learned during my new stint as a first-time father: If a story doesn’t rhyme, well, it ain’t worth the ink used to print it. So in deference to my son’s literary tastes and by way of revisiting last year’s “What to wear?” entry, I give you, “Perhaps, just our underwear?” For some of you, that title might suggest a television program along the lines of Grey’s Anatomy, but with more revealing scrubs. But for most of us, well, we’d rather not go there … better our docs (and our colleagues) stay fully dressed at work.

I’m returning to the debate over what we should wear in the hospital because recently, the AMA was all set to vote on a resolution recommending that the white coat be put to rest. While it initially appeared that the plug was about to be pulled on said coat, it turns out that it has some staying power.

As reported in the WSJ health blog, the AMA’s preliminary report states, “Many speakers [at the AMA annual meeting] voiced concerns with the state of the science surrounding the effectiveness of dress codes in preventing nosocomial transmission of disease. Although your Reference Committee appreciates the intent of the [dress-code] resolution, the action requested … may have unintended consequences, a concern raised by some speakers who testified.”

I don’t know what exact concerns were raised, but I can wager a guess. The traditionalists probably argued that our professionalism was at stake. Perhaps they also were concerned that a medical student might actually be called “Doctor,” absent the short white coat.

The non-traditionalists …. Wait a minute, we are talking about the AMA here! There ARE no non-traditionalists. The ultra-traditionalists (that’s more like it!) may have worried that without white coats, we’d find ourselves on a slippery slope that would ultimately lead to us all wearing tie-dyed scrubs and greeting patients with a friendly, “What’s up, dude?” Or perhaps the powerful starch and bleach lobby showed up and muscled the resolution into hibernation … who knows?

In all seriousness, the question of whether or not to bare arms is not so simple for image-conscious hospitalists. That’s especially true for those of us concerned about patient satisfaction scores–and almost all of us are, at least in some way, engaged in an arms race (my last pun, I promise) to improve our hospital’s ratings. While doing the right thing (being communicative, responsive and polite to patients) clearly matters, it may not be enough. Appearance probably directly correlates to patient satisfaction scores, regardless of how well physicians are doing all of the “right things.”

We already know that the white coat is significantly favored by patients, so it stands to reason that physicians are more likely to be trusted when they are so garbed. However, in medicine we need to back up assumptions must with evidence.

So here’s my call: Let’s all unilaterally disarm. While the evidence may be lacking, I believe that the answer to the “What to wear?” debate clearly satisfies the common sense litmus test. We know that a cotton garment washed weekly (or monthly, at best, for a medical student) must have the ability to harbor a nosocomial jungle.

Because we know this to be a fact, at the end of the day, what is there really to debate? If all hospitalists decide en masse to abandon the white coat, we’ll be competing for great patient satisfaction scores on a level playing field. Perhaps we might even start marketing our casual Friday attire by wearing scrubs imprinted with, “My white lab coat was a festering feeding ground for deadly pathogens. I expose my bare arms … because I care!”

In the meantime, I will be working to broker an exclusive licensing agreement with Under Armour to develop a new line of hospitalist attire. Nothing says we are serious about stamping out nosocomial infections better than short-sleeved, tight-fitting spandex.

Most importantly, once outfitted in Under Armour-licensed uniforms, the kids–my son included–will think we are cool–despite the fact that nothing rhythms with hospitalist!