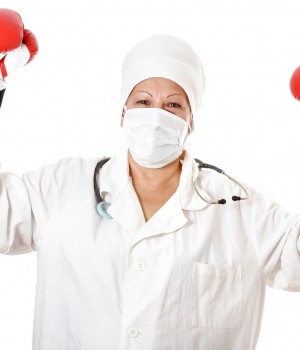 One of the hottest trends in popular culture is reality TV shows, and none is more trendy than the reality offerings from my home state of New Jersey. Look no further than “The Real Housewives of New Jersey,” “Jerseylicious,” “Jersey Couture” and, of course, “The Jersey Shore” to understand just how fascinated Americans are with all things Jersey. Even someone as far removed from popular culture as myself is aware that there is a guy who has become famous, at least in part, for naming his well maintained abdominal muscles “The Situation.”

Upshot? I’m the epitome of cool. I live in New Jersey and I’m a hospitalist, arguably the hottest thing going in medicine. So how could I deny viewers across America the next great idea in reality TV? Yes, you guessed it: “The Real Hospitalists of New Jersey.” And who will star in this program? Me, of course.

Call me “The Circumstance.”

My first challenge on the road to inevitable commercial success: pitching the show. For advice on how to turn my dream into America’s reality, I went to the Web site, The TV Writers Vault. A quick survey of the site services proved to be perfect for what I needed. After all, the site is the “project database used by leading Production Companies, Networks, and Agents seeking original TV show ideas and scripts for production in all genres of televised programming,” or so says the site.

The first thing I learned was that every successfully pitched television show needs a “Logline … a one or two sentence description that tells the basic premise and purpose of a TV show idea.” Here, for example, is the logline for “The Bachelor”: “Twenty women will court and compete to win the affections of one man who will narrow the selection until he must decide on his one true love.”

That doesn’t sound so hard. “The Circumstance will lead 20 hospitalists as they navigate the politics of an exceedingly complicated health care system while simultaneously competing to win the affection of their patients who must ultimately be discharged (or worse) before Medicare goes bankrupt.”

I think I just nailed it.

The TV Writers Vault offers some other keys to success for the potential reality TV showster. It must have concepts that are highly marketable, such as “Wife Swap.” In addition, unique professions or lifestyles must be featured, as with the “Deadliest Catch” or the just-announced reality show about NYC scrap dealers (really?), “Scrappers.” Plus, the show must traffic in moral quandaries or social dynamics, as does “Survivor.” Check, check, and check.

What could be more marketable than the 7 a.m. signout? Live the drama of the tortured decisions a hospitalist has to make, such as who gets 15 patients and who gets stuck with 16. Feel the agony of the hospitalist saddled with the patient who bounced back for the 17th time with chest pain; the tension will fry your TV.

Lifestyles? Think seven-on/seven-off. Watch the hospitalist arrive well-rested on day 1, devolve into depression and exhaustion by day 3, exhibit signs of rebirth by day 5, and enter the waning hours of the final shift on day 7 in a manic frenzy of fatigue and merriment. And I got your social dynamics right here, baby! I’ll see The Situation’s “GTL” (that’s Gym, Tan, Laundry, for those of you who live in a cave) and raise him “RRR”: Round, Readmit and Repeat.

The last words of advice from The TV Writers Vault are that a reality show must “revolve around a specific issue everybody can relate to” and must be, in addition, “big fun, and often dramatic social experiments.”

Even Hollywood types will understand why a hospitalist’s reality is dead on for both. Who doesn’t relate to his or her own mortality? Not to mention putting said mortality in the hands of perfect strangers. Now, watch all of this fear played out with unrelenting reality as hospitalists attempt to coordinate the opinions of five different subspecialists while working closely with case management, social work, families and insurance companies.

Oh yeah, this is Big Fun! And an even bigger experiment! ‘Cause who knows what could happen? I’ve got goosebumps just thinking about it. I can already hear Hollywood’s top-shelf producers and agents shouting to their assistants, “Cancel my 3 o’clock with Steven Spielberg, and get me The Circumstance on the line!”

Assuming we can bleep out a few bad words and more than a few HIPAA violations, I just can’t imagine how “The Real Hospitalists of New Jersey” won’t rule the reality-TV world for years to come!