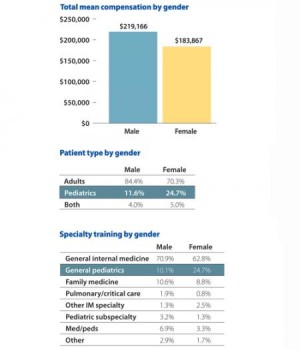 TAKE A LOOK AT THE RESULTS of the 2010 Today’s Hospitalist Compensation & Career Survey by gender, and you’ll notice a stark difference in pay along gender lines. While male hospitalists reported earning a mean compensation of just under $220,000, their female counterparts reported earning just under $184,000. That’s a difference of $36,000, or nearly 20%. Here’s an analysis of the possible reasons for those differences.

It’s no surprise, then, that many more female hospitalists trained in pediatrics than their male colleagues.

How are you paid? Another reason that female hospitalists may be paid less than their male colleagues: More of them report being paid via a salary as opposed to pure productivity or a combination of the two. Our survey this year found that hospitalists who are paid straight salary receive significantly less ($181,465) than physicians whose compensation also includes a productivity component ($214,240).

How many shifts a month do you work? Finally, if you think the key to women hospitalists earning less than their male colleagues is because they work fewer shifts, that’s not borne out in our data. Women hospitalists reported working a mean of 15.08 shifts per month vs. 15.69 for men “only a 4% difference.