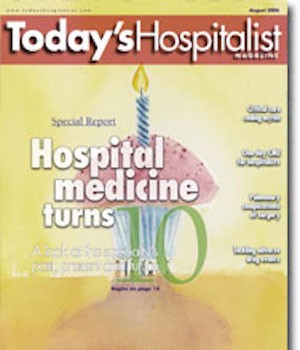 Published in the August 2006 issue of Today’s Hospitalist

Talk to nearly anyone in health care about hospitalists, and one of the things you’ll hear over and over is that there’s no turning back. Hospital medicine is here to stay, they explain, because hospitalists simply bring so many benefits to the hospitals, physicians and patients they serve.

While it’s true that hospitalists have put down deep roots in their 10-plus year history, veteran hospitalists and industry observers alike say it’s only the beginning. The consensus is that in its second decade, the specialty is poised to not only continue its meteoric growth, but make new inroads into U.S. hospitals.

That’s because in the next few years, hospital medicine will be reshaped by a number of trends that are also rippling through all of U.S. health care. As hospitalists take the lead in dealing with these issues, which range from quality incentives to the public reporting of data, the specialty stands to take a leadership role in American medicine.

A good example is the pay-for-performance movement. In the coming years, hospitalists will have to learn to meet quality measures being implemented by payers like Medicare. It’s hospitalists, after all, who provide most of the care to pneumonia, stroke and myocardial infarction patients, and it’s hospitalists who are in a unique situation to improve those individual’s care.

As facilities realize just how much hospitalists can help them meet big-picture goals like standardizing care, the thinking goes, the specialty will look like a godsend.

That’s not to say that hospitalists don’t face challenges of their own. Continuity of care “think handoffs and discharges “is still the 800-pound gorilla that looms over the specialty. Despite these types of challenges, however, the demand for hospitalists is huge, and it’s growing.

Here’s a look at the major trends experts say will affect hospital medicine in the coming years “and a glimpse of what they will mean for the specialty.

Nearly everyone seems to agree that in the next decade “and more likely in the next five years or so “hospital medicine will get its own certification process. The details are sketchy, but it’s no secret that the Society of Hospital Medicine has been working with the American Board of Internal Medicine to give hospitalists a certification exam they can call their own.

Mary Jo Gorman, MD, president of the Society of Hospital Medicine, says that a separate certification process will give hospitalists an edge when talking to health care insurers.

“What hospitalists are doing in the hospital is very different from what traditional visiting practitioners have done in the past, so there should be some distinction in how we’re paid for that,” explains Dr. Gorman, who is a member of the physician advisory board of IPC-The Hospitalist Company. “Once that distinction is made, we can have a conversation with payers explaining what we do differently. We can work on a way to better recognize our contribution.”

Scope of practice for hospitalists has always been something of a moving target, and looking ahead, that trend will only accelerate. Many in the specialty, in fact, envision a day in which the care of nearly every inpatient will be coordinated by hospitalists.

The question is whether hospitalists are ready to meet that kind of role. “There are still some who see themselves primarily as internists and don’t want to be involved with surgical co-management and don’t want to consult on OB patients,” says Dr. Goldsholl. “There will be some internal debate about those limits.”

While John Nelson, MD, agrees that there will be some tension within the specialty, he also predicts that the pressure will not ease up in the near future.

“It will be increasingly difficult for hospitalists to view their scope of practice as traditional internal medicine activities in the hospital,” explains Dr. Nelson, who is director of the hospitalist group at Overlake Hospital in Bellevue, Wash. “Internists have not traditionally admitted patients with a hip fracture, but I think the system is going to require that we do things like that more and more often.”

Mr. Nahm, who is vice president of physician services with The Camden Group, which has offices in Los Angeles and Chicago, says that role includes moving patients from the ED to the floor in a timely way, discharging patients quickly and efficiently during the day, and streamlining the delivery of everything from diagnostic tests to overall patient care.

Scope of practice isn’t the only thing that hospitalists can expect to grow in the near future. Most experts predict that hospitalists will increasingly be asked to maintain a presence in the hospital 24 hours a day.

While hospitalist programs are currently using a variety of scheduling models, veterans of the specialty say that 24/7 coverage will be the way of the future. Dr. Goldsholl points out that recent survey data from the Society of Hospital Medicine show that the number of programs that offer 24/7 coverage is up. She adds that about half of the hospitalist programs run by her company have physicians working around the clock.

Dr. Nelson thinks the growth of 24/7 coverage is inevitable. “Just like you can’t shut down the ER at 11 at night,” he explains, “someone needs to be in the hospital 24 hours a day. There’s increasing pressure to keep someone in the hospital, and it’s natural that in facilities without residents, it will be hospitalists.”

How will hospitalist programs, which already have a problem finding enough physicians, recruit hospitalists who want to work the graveyard shift? Dr. Nelson says the best solution will be to have a cadre of doctors who only work the night shift, with the rest of the physicians working days and evenings.

The key, he says, will be to pay “nocturnists” a significant shift differential. “You need to be paid more to work less,” he explains.

A related trend, according to Mr. Nahm from The Camden Group, is that hospitalist programs will learn to make better use of nonphysician providers like NPs and PAs. While hospitalists have been reluctant to use midlevel providers, he suspects that programs will begin to find roles for nonphysicians. One potential use, Mr. Nahm predicts, will be staffing those hard-to-fill night shifts.

Pay for performance
As hospitals recognize the role their hospitalists can play in helpÂ¬ing them meet the quality incentives being introduced by payers like Medicare, hospitalists can expect more and more of their pay to come from incentives.

Winthrop Whitcomb, MD, director of performance improvement at Mercy Medical Center in Springfield, Mass., says that while Medicare prohibits hospitals from sharing savings proÂ¬duced by hospitalists in reducing length of stay and the costs of care “that’s considered “gainsharing” “hospitals are free to share bonuses earned when physicians meet guidelines in areas like discharge medications for patients with myocardial infarction.

“There will be more money at risk based on measures of qualÂ¬ity in the next 10 years,” Dr. Whitcomb predicts. “It will grow logarithmically.”

The influence that hospitalist programs will exert in the hospital will only grow as the specialty develops a greater expertise in managing hospitalists.

One of the challenges in hospital medicine today, explains Dr. Gorman, is that a variety of people are running programs. Multi-specialty groups employ hospitalists, as do cardiology groups, orthopedic groups and hospitals.

The development of seasoned hospitalist leaders will inevitably lead to new roles for hospitalists. “The hospitalist program leader in the future will also be a medical staff leader,” Mr. Nahm says, “with the goals, direction and management of a program closely aligned with the strategic goals of its hospital. The acumen of the hospitalist leader will include expertise in clinical issues and outÂ¬comes, human nature, politics and management.”

The crisis in health care financing

When Ronald Greeno, MD, looks into the future of hospital medÂ¬icine, he agrees that issues like certification and scope of practice are key issues. But the even bigger trend, he says, revolves around the country’s coming crisis in health care financing.

The skyrocketing costs of health care were on the mind of many of the people interviewed for this story. While some wondered if economic belt-tightening might produce a down side for hospitalists in the form of reduced fees, no one seemed particularly worried that changes in health care financing would be catastrophic for hospitalists.

Dr. Greeno, however, takes a much more optimistic view. He predicts that the more the country tries to rein in costs and streamline care, the bigger a role hospitalists will play.

After all, he asked, who better than hospitalists can adÂ¬dress a wide range of issues like efficiency of care, pay-for-performance measures and increasing patient capacity?

“There’s really one best way for hospitals to address these issues, and that’s with a hospital medicine program,” says Dr. Greeno, who is chief medical officer for Cogent Healthcare Inc. “The reason it works so well is that it can affect so many of your patients. What other program does a hospital have that can affect 60 percent or more of its patients?”

“Hospitals are realizing that these are the most important programs they have,” Dr. Greeno says. “With time, hospital medicine programs will become the centerpiece of a hospitals’ strategy to compete and survive, both from an economic standpoint and a regulatory standpoint.”

While not everyone is quite as optimistic as Dr. Greeno, there seems to be a general feeling that hospital medicine is in an excellent position to make a difference.

David Meltzer, MD, PhD, associate professor in the department of medicine at the University of Chicago, has conducted research on how well hospitalist programs work. While some of those studies have yielded mixed results, he is convinced that hospitalists are one key to the success of U.S. health care.

“There’s real hope that we will produce value as we study ourselves and improve ourselves, and it won’t just be a reshuffling of the responsibilities of physicians, but a real re-organization,” says Dr. Meltzer, who is director of the University of Chicago’s hospitalist program. “The fact that this whole area is so new makes me hopeful that this won’t be an evolutionary time, but one where dramatic changes take place.”