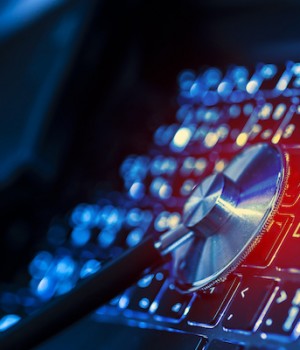 While it’s been an elusive goal for 40 years, health information technology (HIT) may finally be reaching critical mass, given a push by government funding and high-level support. While only 11% of hospitals have electronic medical records “and even fewer have computerized-physician order entry (CPOE) “the factors driving the development and adoption of information technology at last appear to be on a roll.

That’s great news, right? Not necessarily, according to Kendall Rogers, MD, chief of hospital medicine at the University of New Mexico Health Sciences Center in Albuquerque. In a session he co-presented on information technology at the Society of Hospital Medicine (SHM) annual meeting this spring, Dr. Rogers delivered a scathing indictment of the problems plaguing many IT systems, and of the stonewalling that vendors typically bring to fixing those problems.

Out-of-the-box EMR systems “which hospitals may rush to buy and implement to take advantage of federal grants “”are currently unproven,” said Dr. Rogers, who chairs the SHM’s IT committee. Most data backing health IT’s big safety and efficiency dividends have been culled, he added, “from homegrown systems that are incredibly receptive to physician needs.”

And physicians find themselves stuck in a Catch-22 where vendor contracts prohibit doctors from sharing error reports and software advances, which in turn stymies much-needed improvements. Dr. Rogers framed his presentation as a call to arms for frustrated hospitalists, who he said should take the lead in IT development and advocate for putting IT firmly at the service of patient safety.

“We are the experts in the nation dealing with this,” Dr. Rogers said. “We often know how to use the software better than the people making it, and we’re uniquely positioned to advance HIT in inpatient environments.”

Design and implementation flaws
Dr. Rogers said he embraces the promised benefits of information technology, but only if it can be designed and implemented correctly. “It could revolutionize health care,” he announced. “Besides the potential gains for quality and safety, it could extend the number of people we care for, and make us faster and smarter.”

But he and his co-presenter, Ross Koppel, PhD, presented a long list of what’s standing in the way of doctors reaching those goals. For one, “current software is barely useable,” said Dr. Rogers, something hospitalists who work with EMRs or CPOE are painfully aware of.

Dr. Koppel, a professor of sociology at Philadelphia’s University of Pennsylvania who’s written extensively about problems with health information technology, detailed ways in which flaws in software design can exacerbate errors.

Cramped data displays, he pointed out, don’t allow doctors to find the information they need. Or doctors get tired of clicking through multiple allergy screens and may easily miss a key patient allergy.

Or they have to dig through several screens to find abnormal lab or culture findings that should be prominently flagged. Or dosage amounts in order sets don’t say if they pertain to kilograms or pounds, making it easy to over- or under-dose medications.

Another problem is that neither vendors nor many local IT departments have the expertise to guarantee safe implementation, even if manufacturers could get the software right. And while doctors may painstakingly point out system problems that need to be corrected, Dr. Rogers said, the way the IT industry operates “inhibits us from being able to go through rapid cycles of improvement.”

Detrimental contracts
A more egregious example of how vendors inhibit improvement can be found in contract language that shifts liability for system flaws away from the IT industry itself.

One such legal maneuver is “hold harmless” clauses, which Dr. Koppel wrote about in a commentary in the March 25, 2009, issue of the Journal of the American Medical Association. These clauses, Dr. Koppel said, hold vendors harmless even when companies have been repeatedly alerted to system errors or flawed configurations.

Instead, those flaws are supposed to be detected by “learned intermediaries,” more contract language that means that the responsibility for correcting errors rests with the experts “doctors, nurses, pharmacists “using the system.

Even more damaging, he continued, are non-disclosure clauses that prevent users from sharing system reports or screens.

“Not only are you responsible for any screw-ups in the software,” Dr. Koppel told audience members, “but you can’t even tell your colleagues about them.”

Designing for clinical care, not billing
As a first step toward creating the type of IT systems that doctors need, Drs. Koppel and Rogers said hospitalists need to present a united front in rejecting such contract language. An even more important move is getting hospitalists involved in designing both software and hardware.

While health care is the most complex process that technology will ever tackle, Dr. Rogers pointed out that health IT right now isn’t as usable as “the online systems we book airline tickets with.”

The big problem is that very few systems are being built from the ground up to provide clinical care. Instead, most IT systems have only “a layer of clinical processes” on top of accounting software, Dr. Rogers added.

To design IT systems to fit clinical processes, physicians first have to understand clinical workflow and formatting. Part of the problem, said Dr. Rogers, is that many hospitalists are attempting to bring IT online at the same time that they’re trying to change the culture of their hospital with protocol-driven care via order sets and clinical decision-support.

“What physicians often see the first time they use CPOE is protocol-driven care through a set of orders,” he pointed out. “They’ll disagree with something in those protocols and hate CPOE.”

That’s unfortunate, Dr. Rogers added, because the decision-support that IT can offer and that is often embedded in order sets holds the greatest promise for physicians in the area of safe, effective diagnosis and treatment. But it’s also the one area of IT that “needs to be developed the most,” he said.

Figuring out how doctors work
When implementing a new system, Dr. Koppel said that order sets and decision-support tools should be added slowly, starting with one small set of decision-support alerts “that make intuitive sense” and carefully evaluating each new element. To better facilitate the way physicians work, decision-support should also avoid what Dr. Rogers called “hard stops,” or alerts that tell physicians “you can’t do this.”

Doctors have a much easier time changing clinical direction rather than coming to a dead end, he explained, so alerts should direct them to consider another approach or diagnosis.

“We should have alternatives built in,” said Dr. Rogers. Decision support is such an important feature of information technology that Dr. Rogers said he believes it should be headed up in individual hospitals by a separate director.

And physicians’ role in IT design and implementation is so crucial, said Dr. Rogers, that hospitalists who plan to devote time to IT development and implementation first need to get schooled in quality improvement. “It’s not enough to understand how IT works,” he said. “You have to know how people and systems work as well.”

The fact that a doctor has to click through 17 screens to order one medication in a CPOE system is not just an annoyance, according to Dr. Rogers. “It is pulling physicians’ attention away from the important task of picking the right medications,” he said. “This isn’t a convenience issue, it’s a safety issue.”

Unfortunately, vendors’ knee-jerk response to such problems is that “it’s a training issue” “a response that Dr. Rogers said hospitalists should not accept. “People can’t be trained to do things reliably,” he said. “Instead, the system needs to be built to support people in providing safe, reliable care.”

While software can be written to do just about anything, vendors typically have an 18-to-30-month-long cycle for improving hard code. During that time, IT manufacturers are busy trying to figure out which of the problems flagged by physicians in a system can be fixed in a new update or version “and sometimes sold back to the hospitals logging the complaints.

“We need to push to shorten those cycles,” Dr. Rogers said. “Significant safety concerns have to get through quickly.”

The only way to make that push and advance IT development is through physician and hospital collaboration. That means that providers have to share the problems they find.

“Yes, non-disclosure clauses exist, but that’s a lawsuit that I would welcome,” Dr. Rogers said. “It is against our moral and professional standards not to report errors that could harm patients, and I do not believe that it is something that could stand up in court.”

Physicians need to work together, he added, to determine what the government’s role in health IT should be, how products should be evaluated, what level of interoperability products need and how certification can be more than “a sales strategy.”

While SHM’s IT committee is beginning to filter through problem reports, committee members support the development of vendor-specific collaboratives so hospitalists can share innovations and issues directly with each other.

“There’s no reason why doctors in 10 hospitals have to start from the ground level to build IT tools if someone has developed an effective tool like an excellent sign-out sheet,” said Dr. Rogers. “We can and should build off of each others’ efforts.”

Pitfalls to avoid with information technology

For one, physicians have to guard against over-reliance on technology. In many academic centers, Dr. Rogers said, residents ordering medications via CPOE assume that any drug listed in an order set can’t be wrong.

And because providers become accustomed to safety alerts when ordering drugs through CPOE, they may keep titrating doses up, waiting for an alert to stop them “even when the system’s alert function is turned off.

“My personal belief is that nurses question handwritten orders far more than they question CPOE orders,” Dr. Rogers said. “People assume that every electronic order has gone through layers of safety before it makes it to them.”

Physicians working locally to fix system problems also have to beware of another pitfall: customization. That’s been hospitals’ answer when an off-the-shelf system doesn’t have the functionality to do medication reconciliation, for instance, or generate a discharge checklist.

“We come up with some kind of workaround,” said Dr. Rogers, “and those can be very dangerous when not done properly.”