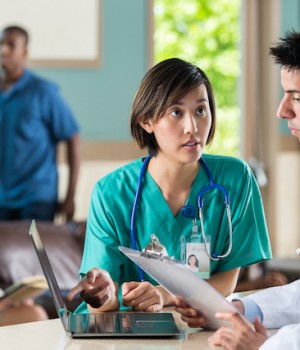 EVERY HOSPITALIST PROGRAM struggles with “familiar” patients, the individuals who are admitted every five or six weeks. They typically have pretty much the same complaints, management and outcome every time, with little changing from one admission to the next. Hospitalists find it hard to ensure that these patients get beneficial care without low-value interventions that put patients at risk for adverse effects.

For John Nelson, MD, the “why” behind such high utilization “often, patients with addiction seeking narcotics or people with chronic pain or poorly managed chronic illness “doesn’t really matter. What’s important is how to manage these patients to benefit them and end that revolving door. That led Dr. Nelson, a cofounder of Nelson Flores Hospital Medicine Consultants, to begin developing “frequent lander” care plans with colleagues at Overlake Hospital Medical Center in Bellevue, Wash., where he heads up the hospitalist program.

“Too often when these patients are admitted, the same thing happens “the blood tests, repeat CTs, the full workup “even if there were no previous findings,” Dr. Nelson says. “And when caregivers come up with a more coordinated approach across admissions to avoid repetitive testing, they may not feel they have the time or know-how to document such a plan.”

Repeating a full-on workup or renegotiating previously agreed-to boundaries doesn’t serve anyone well, he maintains, including patients. In creating care plans, Dr. Nelson’s main objectives were to not just change how these patients are managed, but to ensure that clinicians treating them aren’t starting from scratch.

Detailed dos and don’ts
In early 2013, Dr. Nelson convened a team for the coordinated plan of care committee, which includes staff from nursing, patient advocacy, the emergency department and psychiatry. That team meets once a month and develops one or two care plans each meeting.

Any clinician throughout the hospital including nurses and social workers can propose a patient candidate for a care plan, and all requests are considered. The common denominator, Dr. Nelson explains, is frequent admissions.

“We set the bar pretty low,” Dr. Nelson says, but the team might draw the line when the clinical value of a plan is questionable. The fact that a patient “has a challenging family member,” for instance, is not reason enough to create a care plan.

The proposing person provides a few ideas of what should go in the plan, based on his or her experience. When the request is approved, Dr. Nelson schedules the care plan for the next meeting.

Once drawn up, care plans include a summary of the medical history; reasons for previous admissions; a description of previous procedures, evaluations and treatment; and guidelines for future ED management. Those guidelines may include opiate doses when appropriate and other medication management issues.

Plans also include contact information for providers who have treated or who manage that patient. Perhaps most important, the plan includes a write-up of what has worked during previous admissions and guidance on what to do and not do.

“It’s helpful for the hospitalist to know what’s been tried and whether it succeeded,” Dr. Nelson explains. Some patients with chronic gastrointestinal issues, for example, have had multiple prior abdominal CT scans, which have not changed management. To reduce radiation exposure, the plan may recommend not doing another CT without new objective findings such as leukocytosis, fever or abnormal liver tests. “Sometimes, patients have unique needs that might not be readily apparent to the next person.”

“The plan might say that if the patient is abusive to nurses, he will be escorted out of the building by security,” Dr. Nelson explains. That gives the receiving physician support for a difficult conversation with a challenging patient, “rather than negotiating boundaries anew with each admission.”

The document also spells out what constitutes a reasonable cause to admit a patient or, conversely, how to route that patient to appropriate outpatient treatment instead. Dr. Nelson cites the example of a patient with chronic leukemia who frequently presents with a white blood-cell count of 30,000. “For this patient, the leukocytosis alone is not a reason to admit,” he explains, “whereas with most patients it would be.”

And for patients presenting with cyclic vomiting, the care plan may suggest a previously tried approach to avoid an extended admission. “It might say that we’ll provide 24 hours of IV fluids and this or that treatment, and then discharge,” he says.

After the care plan is finalized, it’s embedded in the EMR with a flag that pops up when that patient’s record is opened. Care managers sometimes set up primary care follow-up for patients if needed, and patients will sign care plans that are written up in the form of a behavioral contract.

Simple, but helpful
While the notion of care plans for high utilizers isn’t new, the idea is to start taking a systematic approach to a persistent problem.

“On their own initiative, various caregivers would make care plans periodically in the past and they were of some value,” says Dr. Nelson. “But we weren’t making them as often as we might have. The point is to more reliably generate plans when needed, and to be more deliberate and rational about how we care for these patients, not to deprive them of care.”

Although it’s too soon to tell whether the plans have reduced readmissions or lengths of stay, Dr. Nelson notes that “admission numbers are down” for patients with care plans.

“What we don’t know,” he says, “is whether they’re just going somewhere else.” In some cases, Overlake has coordinated its care plans with other hospitals, especially when it’s clear that patients are seeking care elsewhere. “We might call the other hospital to see how they’ve managed the patient or if they’ve developed a plan.”

Dr. Nelson expects the advent of the “ED Everywhere” program in Washington, which tracks patients who move among emergency departments in the state, to help hospitals better address such patients. And while he doesn’t expect care plans to address all these patients’ needs, he points to one success story, a young patient with addiction admitted to Overlake multiple times.

“After we created his care plan and talked with him about it, he ended up going into treatment,” says Dr. Nelson. Within a few months, the patient’s primary care doctor reported that the patient was no longer abusing and had returned to work. “This was a hugely gratifying success story, and it seems the care plan played a meaningful role.”