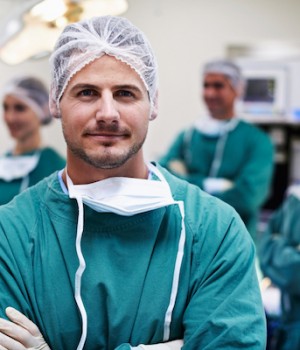 IT’S ONE OF THE MOST CONTENTIOUS ISSUES in hospital medicine: How much surgical comanagement is the right amount? Too much, and hospitalists complain that they’re reduced to ordering aspirin while surgeons sleep in. But too little, hospitals find, and quality of care and length of stay may suffer while surgeons are in the operating room, not available to manage pain or coordinate discharges.

To determine the right level of comanagement, the academic internal medicine hospitalist group at Loyola University Medical Center in Maywood, Ill., began a program in 2007 that dedicates two rotating hospitalists to comanaging high-risk orthopedic patients. What sets this model apart from traditional comanagement is how comprehensive the hospitalists’ service is. Ranging from preoperative clearance to acute rehab, the program targets hospitalists’ skills to patients who really need them.

“The care of many surgical patients is routine,” says Edward Gurza, MD, division chief of general internal medicine, which oversees the academic hospitalist program, “and they don’t need an internal medicine person managing them.”

A new approach Loyola’s dedicated comanagement service for high-risk orthopedic patients has evolved over many years. As a result, the service co-exists at the medical center with other forms of internal medicine consults.

Orthopedic patients undergoing elective surgeries who aren’t considered high risk, for example, may still have perioperative medical problems managed by hospitalists on a more traditional, “as-needed” basis. But according to Dr. Gurza, that approach doesn’t work well for all orthopedic patients. Before September 2007, the entire hospitalist group provided medical consults to orthopedic patients only on an as-needed basis. Sicker or unstable patients would be cared for on the medicine service, with orthopedists acting as consultants.

The problem with that model, Dr. Gurza explains, was that when hospitalists were called to manage patients with substantial comorbidities or social problems affecting discharge, they were often reacting to perioperative morbidity, not preventing it.

Another issue was that hospitalists, particularly for high-risk patients, displayed too much variability in how quickly they saw patients and how they cared for medical problems.

“We weren’t doing as good of a job as we could have,” says Dr. Gurza. Those factors convinced the group to dedicate two hospitalists to exclusively comanaging high-risk orthopedic patients.

“We leave it to the surgeon to triage and pre-screen,” says Dr. Gurza, who notes that the decision to defer to the surgeons on who is high risk was one of the toughest parts of the process to coordinate and standardize. Among orthopedic patients having elective surgery (hip or knee replacement, or reconstruction), he says, perhaps 15% to 20% are high risk. Among hip fracture patients, that percentage soars to 80% or 90%.

Once elective-surgery patients are tagged as high risk, they may see one of the dedicated hospitalists in the surgical ambulatory center for preoperative assessment. Often, these patients have already been cleared for elective surgery by a primary care physician, Dr. Gurza explains. But the additional hospitalist assessment helps “minimize variability and finds missing pieces.”

In at least 10% of the hospitalists’ preoperative evaluations, he adds, hospitalists initiate some additional diagnostic or therapeutic intervention, often having to do with anticoagulation or beta-blockade. Hospitalists also ensure better control of chronic conditions like diabetes and hypertension.

Once patients are discharged from acute care, a dedicated hospitalist frequently follows them to the acute inpatient rehab unit that’s part of the tertiary care center.

Boosting satisfaction scores
According to a study of the service published in the July 2009 issue of Orthopedics, preoperative assessments for high-risk patients have reduced the number of surgical delays on the day of surgery. The research also found that when compared retrospectively to a control group, high-risk patients stayed in the hospital 3.8 days vs. 5.5.

Dr. Gurza chalks that improvement up to the fact that hospitalists, when seeing patients perioperatively, form a relationship with them. That’s particularly interesting, he explains, because the hospitalists do not function as these patients’ attendings.

“Having the orthopedists remain the primary service,” Dr. Gurza says, “helps us make the best use of limited staff resources.”

He adds that clearly setting expectations with the orthopedists “and sticking to their guns “has been a big part of the program’s success. That’s important, he says, because the orthopedists aren’t the only ones looking to the hospitalist group to comanage surgical patients. Urology, ENT and neurosurgery, he notes, “call all the time.”

As the group expands, says Dr. Gurza, it may eventually consider some of those requests. For now, he adds, “We just can’t, or the water level would just keep on rising.”

Who qualifies for comprehensive comanagement?

TO DESIGNATE WHICH PATIENTS coming in for elective surgeries or hip fracture repair need comprehensive perioperative comanagement, the hospitalist group at Loyola University Medical Center in Maywood, Ill., worked with orthopedists to create a protocol that defines stable medical conditions. Patients who have a medical problem that doesn’t meet these criteria are eligible for comprehensive comanagement from the hospitalist group. 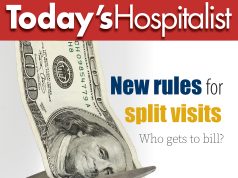