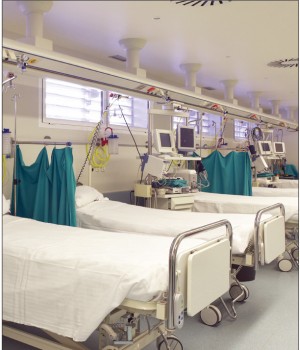 WHEN IT COMES TO STOPPING C. DIFFICILE, a lot of attention has been focused on big-picture strategies like antibiotic stewardship programs. But one Rhode Island hospital found that reducing C. diff rates involved an approach much closer to the ground.

Between 2006 and 2012, Rhode Island Hospital in Providence cut its C. diff rate from 12.2 to 3.6 cases per thousand discharges, a reduction of more than 70%. (The results of the hospital’s initiative were featured in a 2013 issue of The Joint Commission Journal on Quality and Patient Safety.) While the C. diff initiative definitely involved antibiotic stewardship, an even bigger component was introducing new techniques to identify C. diff patients and then thoroughly clean their rooms. Leonard Mermel, DO, the hospital’s medical director of epidemiology and infection control, explains that by using disinfectants to eradicate C. diff while it’s still dormant “on room surfaces, for example “the hospital could stop the pathogen before it infected other patients.

“C. diff forms spores,” Dr. Mermel points out, “so the environment likely plays a greater role in spreading C. diff than it does with other major hospital-acquired pathogens.”

The hospital’s laser-like focus on the environment was a novel approach at the time, in part because the evidence for room-cleaning was considered relatively weak, at least compared to higher-profile strategies like antibiotic stewardship. But as Dr. Mermel points out, the seeming contradiction between the evidence behind disinfection strategies and their effectiveness is not so surprising.

“In infection control, we often don’t have large multicenter trials to compare one strategy to another,” he notes. “Funding for infection control is at an infantile level compared to funding for many other diseases such as HIV or heart disease, so we often talk about how much evidence we need to implement a change. We can’t always wait for grade-A evidence to act in infection control.”

And while disinfection policies were key to his hospital’s success, Dr. Mermel points out another fact of life in infection control: Combatting an infection like C. diff successfully requires a multipronged approach.

Lab testing
As an example of how all the parts of the C. diff initiative were connected, Dr. Mermel notes the importance of lab testing. If hospitals can’t accurately identify patients with C. diff, they won’t know which rooms contain the pathogen “and efforts to eradicate the bacteria will come up short.

In the mid-2000s, when the hospital began targeting its C. diff rates, it was using a lab test that missed nearly half of all cases. While the assay was common at the time in U.S. hospitals, Dr. Mermel says the hospital quickly realized it needed a better test.

“Having a more sensitive assay was critically important,” he explains. “Missed cases weren’t being treated, nor were patients put in in contact precaution or particular rooms cleaned with bleach.”

With a new assay, the hospital’s C. diff rates actually rose because more cases were detected. But within a year, rates began to fall again, in part because the more specific assay allowed the hospital to target C. diff patients for treatment and special disinfection strategies for their rooms. According to Dr. Mermel, many facilities around the country have now moved to a more sensitive assay, using nucleic acid amplification testing methods to diagnose the infection.

Room-cleaning
As for revamping its room-cleaning procedures, the hospital did more than give its housecleaning staff extra bleach and ask them to apply a little more elbow grease. Instead, the infection control team gathered detailed information about how rooms were being cleaned and what resources housecleaning needed.

The hospital, for example, conducted time-motion studies to establish how long it took staff to clean rooms. Next, the hospital used a “glow-germ study” to see how clean rooms actually were, marking a patient room with a fluorescent pen before cleaning staff came in, then using ultraviolet light after to see how thoroughly the room had been cleaned.

“We were able to show that the cleaning staff weren’t able to fully clean the rooms, not because they weren’t working hard enough,” says Dr. Mermel, who is professor of medicine at Brown University’s Alpert Medical School. “They simply didn’t have enough staff to do the job.”

When results were presented to hospital administration, they accepted a recommendation to hire nine more full-time members for the environmental services department. That department continues to monitor the effectiveness of disinfection, sending monthly compliance reports to the infection control department.

But even in the initiative’s early days, the hospital paid close attention to the role that antibiotics played in spreading the infection. Data showed, Dr. Mermel says, that the NAP1 strain of C. diff moving across North America was resistant to quinolones. “After some brief discussions,” he recalls, “the trauma surgeons took it on themselves to limit quinolone use on the surgical side for adults.”

While he is optimistic that antibiotic stewardship will drive down the hospital’s C. diff rates even more, he says it’s also critical to monitor other therapies. A growing body of literature suggests, for instance, that proton pump inhibitors may independently increase C. diff risk.

New efforts
Because pathogens like C. diff are constantly adapting, the hospital continues to update its approach. Not surprisingly, some newer strategies focus on disinfection.

For example, the hospital has redoubled its room-cleaning efforts with something it calls a “bleach holiday.” When a case of C. diff is diagnosed on a unit, Dr. Mermel says, all the rooms on that unit are cleaned with bleach.

And “if someone has C. diff,” Dr. Mermel says, “we now keep them under contact precautions even after they have started therapy until they’re discharged.”

He acknowledges that some physicians may view these latest measures as too aggressive. But new data are providing a better picture of just how virulent C. diff can be. Some experts now think that C. diff can continue to spread even after patients’ diarrhea has resolved.

“Transmission could potentially occur and patients may be able to contaminate their environment even when their colitis is resolved,” he explains. “Many patients successfully treated for C. diff are still shedding C. diff. That’s a big reason why we decided to maintain precautions until C. diff patients are discharged.”

Because bleach can be caustic, the hospital is looking at nonbleach alternatives. Rhode Island Hospital is currently testing a few sporicidal cleaners, and Dr. Mermel expects more alternatives to bleach to begin appearing soon.

“I think there’s a quiet race on in industry,” he says, “to come up with what could be considered the holy grail of C. diff cleaning techniques.”