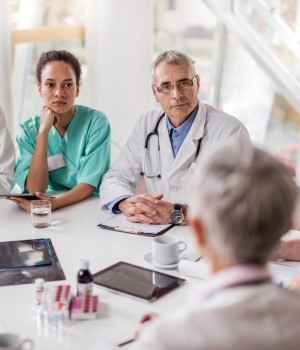 Published in the June 2014 issue of Today’s Hospitalist

SINCE BRENT BOX, MD, helped found the hospitalist program at Gordon Hospital in Calhoun, Ga., in 2009, interdisciplinary rounds on every patient have been a fixture every morning.

As part of those daily rounds, glycemic goals were “brought up on a pretty regular basis,” says Dr. Box, who is both the chief hospitalist and chief medical officer. “But we weren’t getting where we wanted to be.”

The problem, he explains, was that doctors would make changes to patients’ blood-sugar management only when they were rounding on patients individually “and they might not see some patients until 2 p.m. “Doctors wouldn’t get insulin adjustments ordered until 3 p.m.,” he notes, “so changes wouldn’t be made until half the day was over.”

The solution? Starting in 2011, “post rounds” “which includes what Dr. Box calls “sugar rounds” “begin after interdisciplinary rounds. For sugar rounds, the hospitalists, along with midlevels, pharmacists and case managers, sit down together around 9:30 every morning and look at the numbers for every patient in the hospital’s glycemic control program. Any needed adjustments are ordered on the spot.

As Dr. Box explains, the sugar rounds take no more than 15 minutes. “Every patient gets his or her blood sugar adjusted early in the day,” he says. While doctors can tweak those changes later in the day when they’re rounding, “at least we’re making changes a little quicker, and that improves our numbers across the board.”

Color-coded morning reports
According to Dr. Box, case managers attend the sugar rounds because they are integral to getting resources at discharge such as long-acting insulin or diabetic supplies.

During sugar rounds, hospitalists sit with three open EMRs. The doctors work off a seven- or eight-page report, which is ready every morning by 9:30 a.m. and is color-coded for every patient in the glycemic control program.

“Green is in the right goal range, red is too high, orange is getting too high and white is hypoglycemic,” Dr. Box says. “The report helps us immediately visualize who needs to be adjusted, and we enter new orders right there.”

The color-coded report includes patients’ pre-breakfast blood-sugar numbers, as well as their numbers from the previous day, so doctors can tell who may be trending up or down. The doctors define goal range as 70 to 180 mg/dL.

The hospital maintains one multimodal dose regimen, Dr. Box adds, contained in an order set in the EMR. That order set calculates a basal dose as well as a pre-meal and correctional dose.

“The attending doc can always tweak those doses,” he notes. “Some patients come in on insulin regimens that they’ve been doing very well on, so physicians can keep patients on those same regimens.”

Like many other hospitals, “we don’t use oral glycemics,” Dr. Box says. “When patients come into the hospital, we take them off their oral agents and start tracking their blood sugars.”

There’s also an insulin drip protocol for patients in the ICU. On the wards, patients become part of the glycemic program if they have two blood sugars greater than 180; if they are admitted on diabetic therapy, whether that is oral or insulin; or if they’ve had point-of-care blood sugars ordered or point-of-care Accu-Cheks.

Daily adjustments
Not surprisingly, Dr. Box finds that physicians need to adjust the doses of most patients every day.

“It has to do with what they’re eating, or if they receive corticosteroids for COPD or asthma and their sugars go through the roof,” he says. “Often, these are patients whose diabetes is not so well-controlled when they’re admitted.”

Setting aside even a few minutes to deal specifically with glycemic management has definitely improved patients’ care.

It’s also been a big plus for doctors. “It helps us pause and focus,” Dr. Box says. “This is an important clinical issue, and we can do it in a more timely fashion if we just all do it together.”

He and his colleagues have also learned “that you can make patients hypoglycemic if you’re too aggressive, so the first order is to not make them low,” he points out. “The second order is to bring them in range. If anything, we err on letting them run a little high. It’s a balance that’s part of the whole process.”

A move to pharmacy-driven protocols
The 67-bed Gordon Hospital is part of the Adventist Health System, and some other hospitals in the system have likewise adopted sugar rounds. But as Dr. Box admits, “we’re still not where we want to be.” As is the case in many hospitals, he and his colleagues find it hard to achieve consistent glycemic control outside the ICU.

“Some patients are hard to control,” he points out. And while hospitalists are focused on length of stay, “you just can’t bring down patients who are extremely poorly controlled safely within a three-day length of stay, so some you just have to accept. If you get a large percentage of those patients within a month, your glycemic control numbers aren’t very good.”

As a result, Dr. Box says the hospital is getting close to developing protocols that will include pharmacy-driven interventions.

“It will be a partnership between our pharmacists and our physicians,” he explains. The advantage is that pharmacists will be able to turn on protocols “almost immediately when people hit certain thresholds, while doctors are always busy and might not be able to make adjustments right away.”

Other hospitals in the Adventist system are already using that approach. “The hospitals that have gotten the best results,” says Dr. Box, “have been those with heavily pharmacy-driven protocols. Pharmacists can just react more quickly.”

A foundation of team culture
The sugar rounds are part of a program of post rounds where hospitalists “every day “briefly look as a group at all their quality metrics.

“The purpose of the walking interdisciplinary rounds is to get input from all the nurses and ancillary care disciplines,” he says. (During interdisciplinary rounds, teams including hospitalists, nurse practitioners, physician assistants, case managers, pharmacists, dieticians, and physical, respiratory, and speech therapists walk from one unit nursing station to the next, bringing the rounds to the nurses.) “In our post rounds, we look at all our metrics: where we are with core measures, for instance, and with the two-midnight rule.”

Dr. Box sees sugar rounds as being scalable to any hospital, no matter its size. What isn’t negotiable is having a team culture.

“There has to be a commitment not just from the hospitalist group, but from every other discipline to have a team process,” Dr. Box says. “You have to have the support of your quality group, for instance, which will generate a report every day so you can walk in and quickly see your blood-sugar control.”

That team culture is part of the orientation for hospitalists as well as staff. But occasionally, Dr. Box says, a new physician may complain about taking an hour every morning for interdisciplinary and post rounds.

“A few people may say, ‘I could spend that hour seeing patients,’ but then they realize that we get important input and make key decisions on those rounds,” he says. “It doesn’t take too long to make believers out of them.”