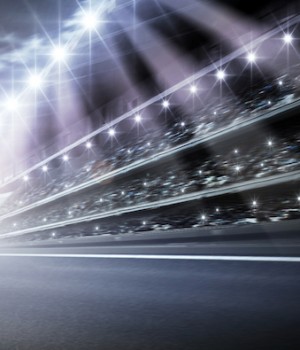 WITH SUMMER HERE, many hospitalists are using their time off to make the rounds of national parks and beaches. But at least one physician is using his down time this summer for a different type of tour: road racetracks. Planned stops include the Laguna Seca and Infineon raceways, both in California.

Growing up in Trinidad and Tobago, Justin-Barry Jerome, MD, says that riding roller coasters was about the most extreme activity he could find. It wasn’t until 2006 “after he’d started working as a hospitalist in the Atlanta area “that he drove a friend’s sports car, a Porsche 911. That led him to buy his own Audi RS4.

“It was the first time I’d driven a car with that much potential,” he says. “I wanted to see what it could really do.”

After entering some high-performance driving events, Dr. Jerome took himself off to school again, this time to the Skip Barber Racing School, to learn the finer points of braking, lane changes and regaining control of a spinning car.

He switched to racing formula cars “one-seaters that weigh just a couple hundred pounds ” and “spec” cars, which are street cars modified to racing specifications. He started entering more than a dozen events a year, although he’s had to back off from that pace lately. The birth of his son, he jokes, “chewed up some of the budget,” and a job switch left him with less time off.

For Dr. Jerome, racing helps relieve the stress of practicing medicine. “It’s much less cerebral, although you always have to calculate the risk involved in making any move,” he says about racing. “And it’s definitely more physically demanding.” Unless you’re racing street cars that have power brakes, he explains, your legs have to supply all the braking power, while dealing with G forces and heat.

And while the weight of the automobile stays the same, he says, any weight he gains can cost him fractions of minutes or miles. He stays in shape by working out and running.

That’s particularly an issue because, topping six feet, he’s much taller than many drivers he competes against. And at 35, he adds, he’s “ancient” compared to most drivers, some of whom are teenagers.

Still, Dr. Jerome says that he would jump at the chance to get a sponsor, turn professional and leave medicine, at least for a while. But he’s also realistic enough to know that earning a living through racing isn’t easy.