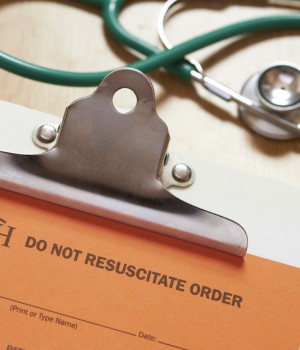 WHEN IT COMES TO discussing do-not-intubate (DNI) and do-not-resuscitate (DNR) orders in the hospital, it’s understandable that patients are often confused about their options. But one hospitalist thinks that poor wording and physicians’ loose grasp of survival rates may explain some of that confusion.

“We often start with a run-on sentence that goes something like, ‘If your heart were to stop or your breathing got bad, would you want CPR and for us to intubate you?’ ” says Anthony C. Breu, MD, director of resident education for the VA Boston Healthcare System in West Roxbury, Mass.

Hospitalists often lump those two scenarios together. As a result, says Dr. Breu, patients give one reply for both options when their answers might have been different with a more nuanced discussion.

He first became aware of the confusion six years ago when, as a resident, he admitted a woman in her early 80s with chest pain. Her response to his run-on DNI/DNR sentence was, ” ‘I would never want to be on a breathing machine,’ ” he recalls. “But I realized that may not make sense if she had pneumonia or pulmonary edema, something that was reversible.”

A better plan is to focus on goals and values, discuss varying survival rates, then frame questions carefully, says Dr. Breu, author of a viewpoint piece posted online in June by the Journal of Hospital Medicine (JHM) on how to discuss DNI/DNR. He talked to Today’s Hospitalist about what hospitalists should say to ensure patients clearly understand their options.

Why are hospitalists getting this wrong?
In large part because the two events “CPR and mechanical ventilation “are often used together and are needed in the setting of acute, bad things. Here’s the issue: A patient whose respiratory status is worsening may arrest, but not all patients do. In fact, it is more likely that a hospitalist will care for a patient with prearrest respiratory failure than overt cardiopulmonary arrest.

But another part of the explanation is historical. Most internal medicine trainees learn about these discussions in a “do one, see one, teach one” way. As an intern, I observed my junior or senior resident having this kind of discussion, and I took the way they phrased it and mimicked it. Some places have good simulation training or more focused curriculum on how to have this discussion. But even in hospitals that do these well, the focus is typically on cardiac arrest and CPR alone.

Is part of the problem that physicians don’t know the differing survival rates?
Yes. Most hospitalists can quote the relatively low rate of survival to discharge for people with in-hospital cardiac arrest: less than 25%. But I’d bet that most hospitalists can’t quote the percentage of patients who require mechanical ventilation and survive to discharge, which is more than 60%. So patients survive more commonly, yet mechanical ventilation doesn’t get discussed separately from CPR.

What are patients’ misconceptions?
Patients have an overly optimistic view of CPR outcomes. On TV, most CPR patients survive, so it’s easy for patients to think, “I’ll take that.”

Meanwhile, patients probably imagine that when you’re on the ventilator, you’re on it for a long time and it isn’t comfortable. In reality, ventilation is transient for many patients, and we make efforts to keep patients as comfortable as possible.

Does explaining those rates affect patients’ decisions?
Talking about outcomes does matter. In one study in the July 2013 Mayo Clinic Proceedings, 28% of patients with a DNI order indicated that they would want intubation in the setting of severe pneumonia.

What’s your approach to talking to patients?
I try to look at what’s most likely to happen during an admission. For example, I had a patient last night with anemia bad enough to require a blood transfusion. I felt like a transfusion reaction “such as acute pulmonary edema requiring mechanical ventilation “would be far more likely than cardiac arrest.

The resident led the discussion, but I wanted to be sure to explain that most patients tolerate blood transfusion well but in rare cases, they have a reaction and require ventilation. “We recommend giving you blood and if you accept it, this is a possibility. Were that to happen, there’s a high probability you would eventually be able to get off the vent.” That patient expressed his desire to have any intervention because his goal was to prolong life in the setting of a reversible process.

How do you broach the subject?
For patients admitted with pneumonia, I begin by asking if they have a health care proxy, living will or advance directive because that will guide a lot of the discussion. Those who have one have thought a bit about it. If they haven’t, I ask, “Have any of your physicians talked about issues at end of life?” If they say no, I say, “I want to talk to you about a couple things, especially considering you’re admitted with pneumonia.”

What do you say then?
I say, “Most patients with pneumonia do well, their lungs heal and they never require anything beyond medical treatments like antibiotics. Rarely, it gets bad enough that they require ventilation, being on a breathing machine. What do you know about that?” Depending on what they say, I say, “Based on what you know, is that the sort of thing you’d want us to support you with?”

Even if the patient says he has a DNR, I ask, “How should I interpret that? What does that mean to you?” If he says he never wants to be on mechanical ventilation, I go a bit deeper and say, “Let me explain more about when you might need mechanical ventilation and why I might suggest you accept it, if it came to that.”

How do you make it clear that you’re talking about two different things?
After some discussion, I say, “There’s a separate, second issue that we need to discuss and that’s your feelings about what we do if your heart stopped.”

Who else can help?
The person best able to talk through DNI and DNR and understand patient goals is the primary care doctor. But for hospitalists admitting a patient with pneumonia, it’s incumbent upon us to say, “If you need to be on a ventilator, let’s talk about that scenario.” For most patients, a hospitalist or resident can lead the discussion.

Much of the criticism about how hospitalists talk about code status is that we jump into it without getting the idea of patient goals beforehand. When we wrote the JHM paper, my colleagues and I agreed that the discussion ought to be framed around goals, and only then should we make a recommendation and come to a consensus. But practically speaking, we don’t always have time for a thoughtful discussion.

And even with explanations, patients don’t always understand. But my goal in writing this JHM piece is to say that I think the way hospitalists approach this sensitive topic has drawbacks that I fear leads to orders that do not reflect our patients’ true wishes.

Published in the October 2014 issue of Today’s Hospitalist