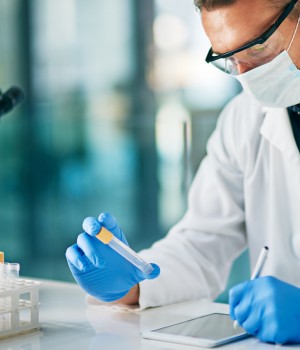 Published in the July 2016 of Today’s Hospitalist

UNECESSARY LABS enjoy a well-deserved reputation as a big waste of health care resources. In fact, when the Society of Hospital Medicine (SHM) joined the Choosing Wisely campaign to curb inappropriate utilization, it called out unnecessary lab testing as one of its five high-cost culprits in adult hospital medicine. “Do not perform,” that SHM recommendation went, “repetitive CBC and chemistry testing in the face of clinical and lab stability.”

But repeat lab tests are standard protocol in many hospitals, and overcoming a “better-safe-than-sorry” mindset is tricky. Nonetheless, when a benchmarking analysis found that the general internal medicine hospitalist service at Salt Lake City’s University of Utah Health Care had higher lab costs per discharge than their top-performing peers, the hospitalists set out to tackle the problem.

“It is helpful to see that a test just for potassium might cost half as much as a full chemistry panel.”

A literature review identified many interventions that work, but none that proved sustainable. As a result, the hospitalists decided that a multifaceted approach—using four interventions simultaneously— would help foster a new mindset around lab orders.

The quality improvement project they launched in 2013 included four interventions:

 Education about lab overuse and associated costs. Internal medicine residents received a 30-minute educational session at the start of their rotation with the hospitalist service. Each resident also received a pocket card showing the charges associated with common lab tests.

 Standardized rounds in which the intern, resident and attending plan the following day’s lab tests for each patient. They used a checklist to make sure lab plans were discussed every day.

 Monthly feedback at the hospitalist group meeting. Physicians learned how the most recent month’s overall lab costs compared to the pre-intervention baseline. Plus, individual physicians could view their own performance figures and compare those to that of their colleagues.

During a 14-month intervention period that ended in April 2014, lab costs per day for patients treated by the hospitalist service fell from $138 to $123. By contrast, daily lab costs for patients in a control group consisting of inpatients treated by physicians other than hospitalists increased at a non-significant rate during the same period. Further, the daily use of three common diagnostics—the basic metabolic and comprehensive metabolic panel, and complete blood count—declined significantly for hospitalist patients compared to controls.

So did the multifaceted intervention prove to be the sustainable solution the hospitalists were looking for?

“This is something we talk about in meetings, teach residents about and continue to emphasize,” he says. “We’re hopeful that it’s had some cultural change.”

Dr. Yarbrough spoke to Today’s Hospitalist about the project.

Was it easy to get physicians on board  with this initiative?
In general, our group is interested in addressing these types of issues, but there were degrees of enthusiasm for this. Some people bought in immediately. But for some, it took time to learn that a lot of tests are not needed.

The major barrier was trying to incorporate the checklist into the rounding process. The hospital is getting busier and busier and we are getting pulled in many different ways, so this could be seen as just one more step that you need to take. There is still variability today related to that.

What did the education entail?
Our residents rotate on a monthly basis. During the first week of their rotation, they have dedicated time for teaching, so we incorporated a discussion of some elements of quality improvement and health care value and cost. Then we specifically related that information to the lab test project and let them know what they were expected to do.

What was the role of the pocket cards that showed charges for individual tests?
The pocket cards listed the hospital’s charges rather than our costs, but they reflected the relative difference in testing costs. It is helpful to see that a test just for potassium might cost half as much as a full chemistry panel.

Also, pocket cards illustrate that most tests aren’t that expensive individually, but the additive cost can be significant.

Which of the several interventions  was the most important?
One problem with a multifaceted intervention is that you are not able to parse out which one is the most important. Anecdotally, though, our hospitalist group felt that changing the process to discuss labs during daily rounds through an explicit checklist and the routine audit and feedback at our monthly meetings had the biggest impact.

What advice can you share about doing this type of QI project?
We believe that demonstrating variation helps identify areas that you can focus improvement on. We are never being punitive with this; we are looking for opportunities to improve.

For example, we recently looked at a project regarding antibiotic use for upper respiratory tract infections. When you look at physicians individually and the percent of the time they prescribe antibiotics, you see incredible variability.

We have learned that having clear measurement with routine feedback is essential. We have tried some projects in which we did not have a way to provide routine feedback. Unfortunately, you don’t really know then if you’re doing well or not, and that kills a lot of momentum.