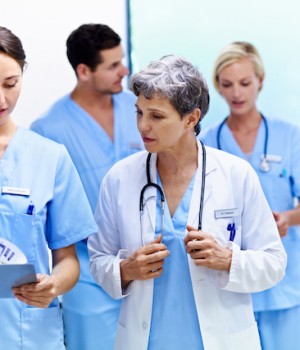 Published in the January 2015 issue of Today’s Hospitalist

TO REDUCE READMISSIONS and avoid CMS penalties, hospitals are testing a host of post-discharge options to improve transitional care.

But a group of researchers at Yale-New Haven Hospital’s Saint Raphael campus decided to take a different tack, intervening early in patients’ hospital stay for the second most common discharge diagnosis: pneumonia.

The MCPIS (the “M” is for modified) was calculated on all patients admitted with a pneumonia diagnosis. Researchers also launched daily pneumonia rounds, which served to improve education and communication around diagnosis and treatment.

The research team then compared data on patients discharged with a pneumonia diagnosis during a three-month period before the interventions were put in place in 2012 and the same amount of time in 2013. Post-intervention, they found that the percentage of patients deemed likely to have pneumonia jumped from 25.5% to 78.6%, while those with only possible pneumonia actually declined from 31.9% to 17.9%.

Just as impressively, researchers saw pneumonia-related readmissions fall post-intervention from 10.5% to 3%. Among patients discharged with a pneumonia diagnosis, all-cause readmissions also fell significantly from 20.7% to 13.2%.

The MCPIS is calculated based on the patients’ temperature, sputum cultures, white blood cell count, oxygen requirements and X-ray findings. (See “Improving the accuracy of diagnosis” on page 13.) Physicians “typically residents “calculate patients’ scores both on admission and at 32 hours.

Study results were presented at this fall’s meeting of the American College of Chest Physicians.

“The modified scoring system is a quality improvement tool,” says the study’s lead author Hussein Hussein, MD, a pulmonary and critical care medicine fellow at the Oklahoma University Health Sciences Center in Oklahoma City who worked at Yale-New Haven Hospital at the time of the study. Combining the use of that tool with the multidisciplinary daily rounds made the project a success.

“The team approach “involving and communicating with different groups of physicians, as well as nurses, continuity care staff and social workers “was the most important aspect of the study because it provided an opportunity to educate people about pneumonia diagnosis and treatment,” Dr. Hussein says. “And the MCPIS, along with discussions with the radiologists, significantly improved diagnosis accuracy.”

Did the interventions lead to more frequent tests and labs than before for patients with a pneumonia diagnosis or suspected pneumonia?
Not really, but the group discussion during rounds helped people diagnose pneumonia more accurately by reviewing test results more closely. We did find people asking more frequently for sputum cultures after the intervention, which helps identify the bacteria responsible for the infection. This helped physicians choose the most appropriate treatment and antibiotics.

Our results suggest that sputum cultures might be underutilized in these patients.

How were the rounds structured, and which physicians participated?
The pneumonia rounds were added on to the regular daily rounds and usually involved a five-minute discussion at the end. Besides pulmonary medicine, we also included hospitalists and residents on the service, and radiologists discussed the cases. The hospitalists were key participants because they’re usually following these patients.

The most effective aspect of the rounds was determining whether patients had pneumonia based on their MCPIS score. The intervention also focused on reducing aspiration risk. The continuity care staff were involved to help with discharge planning to make sure these patients had follow-up appointments.

Based on your findings, how often are pneumonia diagnoses incorrect?
We didn’t have long-term data from before the study to compare so it’s hard to say how many pneumonias are missed. But the fact that the percentage of patients deemed likely to have pneumonia based on their MCPISs increased from 25.5% to 78.6% indicates that a lot of pneumonias might have been missed.

I think this closer surveillance helps physicians consider other possible diagnoses. We found that some patients with suspected pneumonia actually had heart failure decompensation or COPD exacerbation.