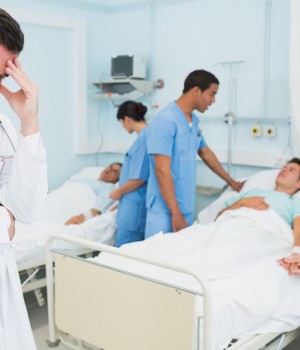 FOR HOSPITALISTS treating medically complex inpatients, assessing their risk of suicide and looking out for suicide hazards probably doesn’t top the list of priorities.

Yet physicians may want to start addressing these issues, particularly because so many patients with psychiatric disorders end up on medical floors due to a lack of psych beds and facilities.

Data indicate that 1,500 inpatient suicides occur in U.S. hospitals each year “and that almost half of the inpatient suicides and suicide attempts in Veterans Affairs hospitals take place outside of a psychiatric unit. According to a study published in the February 2010 issue of the Joint Commission Journal on Quality and Patient Safety, suicide hazards often go unrecognized until something goes wrong.

“Clearly, suicide risk and hazards are an issue on medical units too, not just psych units,” says the study’s lead author, Peter Mills, PhD, MS, who directs the VA’s National Center for Patient Safety field office in White River Junction, Vt. “But for physicians who haven’t been trained in a psychiatric setting, looking at the environment and making sure it’s safe can be a new thing.”

Some simple solutions
Dr. Mills’ study evaluated the benefits of using a suicide-hazard checklist in VA mental-health units to identify and mitigate hazards. (The VA made use of the checklist mandatory in 2007.) Researchers found that while hazards are indeed numerous “they uncovered more than 7,000 in 113 facilities “some solutions are simple.

Researchers realized, for example, that simply removing plastic bags from hospital-room wastebaskets and ensuring that windows don’t open more than six inches could mitigate two common suicide routes: suffocation and jumping. And placing at-risk patients on medical units where they can be readily seen by several staff members ” such as across from a nursing station “can prevent another common suicide risk: elopement.

“It’s always a challenge because you can’t refurbish a whole unit,” suggests Dr. Mills, who’s an adjunct associate professor of psychiatry at Dartmouth Medical School in Hanover, N.H. “The idea is to take care of the easy fixes first.”

Anchor points and weapons
When the VA set out to identify suicide hazards in mental-health units in 2006, officials found that use of the checklist mitigated an impressive 73% of the hazards identified the first year. Bathrooms topped the list of hazard-ridden locations on units, followed closely by bedrooms and corridors.

In the VA study, anchor points “primarily doors, metal bars and furniture “accounted for 44% of the identified hazards. What hospitalists might not know, says Dr. Mills, is that in approximately half of all suicides by hanging, the anchor point used is something like a towel bar that is not necessarily located above patients’ heads. Ceilings may also pose considerable hanging hazards when tiles can be removed to expose pipes or ventilation equipment.

The second hazard category included items that could be used as weapons, such as metal knives and forks. Even the lack of tamper-proof screws in critical areas proved to be a significant hazard in the study, accounting for approximately 8% of all hazards uncovered.

“Simply replacing regular electrical outlets with safety devices “like those used to prevent small children from being harmed “is a low-cost fix,” Dr. Mills observes.

What does and doesn’t work
Given how many hazards the VA found in psych units that already incorporate risk-reduction features, Dr. Mills acknowledges the difficulties hospitalists will have trying to address hazards on medical wards.

First, though, Dr. Mills offers some caveats. Camera monitoring of patients is generally ineffective, he says, in large part because the staff tracking those cameras can be bored, distracted or called away to other tasks.

Also, a surprising number of inpatient suicides, up to one-third, occur while patients are on “15-minute check” schedules. “Fifteen minutes is more than enough time for a patient to die by hanging,” Dr. Mills explains.

And while the study recommends one-on-one observation for suicidal patients placed on medical units, that type of monitoring may not be ideal. That’s particularly true if the staff (or even volunteers) selected don’t have the necessary level of suicide-hazard training and awareness.

As for removing hazards, “bathrooms are a good place to start,” Dr. Mills points out. “They’re private places with a lot of obvious anchor points.” Ensuring that doors can be opened from the outside can help.

Another simple adjustment “making sure that maintenance staff do not leave cleaning chemicals unattended on medical units “is one other example of what Dr. Mills calls “low-hanging-fruit.”

And in patient rooms slated for renovation, designing without bars (using hooks instead) and with doors that swing both in and out would mitigate common hazards.

Make assessment standard
The Joint Commission recently added suicide-risk assessment as a national patient safety goal for patients being treated on psychiatric units and for patients with emotional or behavioral disorders in other hospital settings. That means that administrators may now be more willing to support hazard-reduction efforts that deliver near-term improvements.

Hospitalists can begin by making mental-health status assessment and targeted evaluation standard, both on admission and whenever a patient is transferred. Dr. Mills also urges hospitalists to take the lead in convening multidisciplinary teams to identify suicide hazards in non-psych-unit settings.

Such a team should include not only nurse managers and physicians, but technical staff, maintenance personnel and engineers.

“It’s always helpful to have nonclinical people on the team because they will think of things” “such as hazards associated with equipment or electricity “”that you wouldn’t,” says Dr. Mills. And when one-on-one monitoring of high-risk patients is not feasible on medical units, the hazard-assessment team might propose a less intensive arrangement.

“It’s important to just prioritize where you can,” Dr. Mills says. “Start with the highest hazards and the least expensive mitigations, and go from there.”