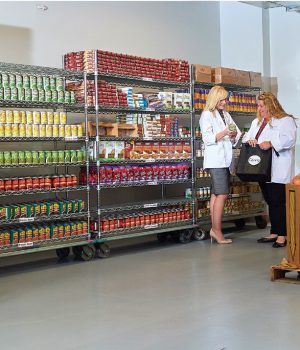 DURING HER 20 YEARS as a critical care physician, Andrea Feinberg, MD, ran into plenty of patients who appeared to blow off their doctors advice and be noncompliant. It took her a while, she says, to understand that many of them were facing insurmountable social needs.

“Someone who has to choose between paying for a prescription or buying food isn’t going to listen to a physician,” Dr. Feinberg says. That realization has led her in turn to adopt this radical notion: “Maybe providing food is part of health care. If we don’t change food delivery, we can’t really treat diabetes, heart failure and hypertension.”

Dr. Feinberg’s new career is as medical director for health and wellness for Geisinger Health, the mammoth integrated system in central Pennsylvania. As such, she’s program champion for Geisinger’s Fresh Food Farmacy, an ambitious and very successful program that provides food as well as a host of clinical, educational and social services for Geisinger patients with diabetes and out-of-control blood sugar who also lack reliable access to affordable, nutritious food. 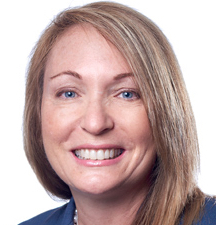 Housed in 1,500 square feet at the Geisinger Shamokin Area Community Hospital, the “farmacy” was launched in 2016 as a pilot with six patients. It has since expanded to include patients with heart failure or hypertension in addition to diabetes—all conditions, says Dr. Feinberg, that are “diet-responsive.” The program now serves more than 100 patients as well as 200 of those patients’ family members. Geisinger is launching another food pharmacy at another hospital this year, while Dr. Feinberg and her team plan to partner with other organizations to launch similar programs in Pennsylvania and New Jersey. The goal is to enroll 250 patients at each site.

Going big
Working with food banks over the years, Dr. Feinberg says she couldn’t help but notice this problem: Through no fault of those organizations’ dedicated staff, many pantries stock unhealthy food. While they may help tide people over in terms of food supplies, they’re not changing the behaviors and poor food choices that foster obesity and diet-associated diseases.

As for the food programs that dozens of other hospitals and health systems around the country now maintain, Dr. Feinberg applauds those efforts. But the problem with many of those, she points out, is they too function as only emergency pantries.

“We saw programs that provide only four days’ worth of meals every two weeks and only for the patients themselves,” she notes. “But a disease process is at work more than two days a week.” Further, if patients are food insecure, so is everyone else they live with.

“People are going to share whatever food they have with everyone in their household,” she says. Geisinger made the decision to go big from the start, supplying two meals a day, five days a week, with enough food to feed everyone in patients’ homes.

“Programs are popping up around the country that recognize the great need we have,” Dr. Feinberg says. “But I haven’t seen many that come close to approaching the problem the way we do.”

Costs and savings
What made that very broad approach possible, Dr. Feinberg explains, is the deep resources that Geisinger was able to bring. Not only could program leaders track costs and savings because the health system maintains its own insurance plan, but they could draw on a deep bench of existing clinicians and staff to provide the wrap-around services the program depends on.

“If you’d need to actually hire all the medical home and wrap-around staff from scratch, this would be very expensive,” she says. “Geisinger already had that framework, so we added the work of the food pharmacy to existing staff.”

Most program costs are related to staff, she adds. While the program initially cost between $3,000 and $5,000 per patient per year, efficiencies have since driven costs down to about $2,200. As for savings from reduced complications and utilization, Dr. Feinberg says that Geisinger is saving $8,000 per year per patient for every one point decrease in hemoglobin A1C levels—and some patients see a three-point drop. (The average reduction is more than two points.)

“You see clinical differences universally”—and very fast, Dr. Feinberg says. Those differences happen so quickly, in fact, that doctors, pharmacists and patients needed to be educated to anticipate a rapid drop in blood sugar levels so they could adjust diabetes medications accordingly. “Due to improved physiologic outcomes, we expect to see financial differences within a year.”

Identifying food insecurity
Patients make appointments to pick up their bags of food once a week. Enrollees are strongly encouraged to attend 15 hours of diabetes self-management group classes, while they continue to meet individually with dieticians for meal planning and recipes. Patients also meet with their team, which consists of a physician, pharmacist and community health worker.

To get the program off the ground, Dr. Feinberg says she and her team turned to community philanthropy as well as quality and community health grants.

“Every community has some philanthropy that’s tied to improving the health of that population,” she points out. Hospitals that want to start a similar program need a local champion, a committed administration willing to invest money, partnerships with local food banks and food retailers, and a plan for a comprehensive intervention.

“You can’t help people two days a week,” she says. “It’s better to deliver on a major intervention, even if you’re targeting only a small group of patients, than to try to do too much or too little and be unsuccessful.” And expect to run into resistance enrolling patients. “You have to invite and sometimes cajole patients to participate,” Dr. Feinberg says. You also have to understand their obstacles to participating—the need for transportation, for instance, or day care—and help them overcome those.

But every doctor in the hospital, she adds, knows who those really sick patients are. “They’re the patients cycling through the hospital between the ICU and the wards,” she says. Hospitalists who want to identify patients struggling with food insecurity need to ask only two questions: Do you worry about running out of food by the end of the month? And do you actually run out of money or food by the end of the month?

“If they get an affirmative answer, those patients are having great difficulty,” says Dr. Feinberg. “They can’t afford to treat their illness.”