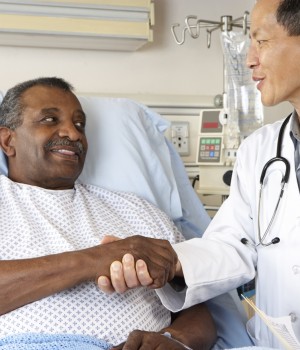 EXCELLENT COMMUNICATION during discharge can help keep patients from bouncing back after they leave the hospital. But those conversations can quickly become complicated when patients or families don’t speak the same language as the physicians and nurses.

That’s often the case at Children’s Hospital Los Angeles, which discharges an average of 1,000 patients per month. Around 75% of those discharges need some help with translation, the vast majority being Spanish.

Ara Balkian, MD, MBA, chief medical director of inpatient operations, says the hospital has spent years working to improve different aspects of the discharge process. Because so many patients there don’t speak English, recent efforts have focused on improving the efficiency of translation (written language) and interpretation (spoken language) services as they relate to throughput and discharge.

Dr. Balkian and his colleagues tracked discharges to see if there was any time difference between those for English-speaking and Spanish-speaking patients. The team found that the average discharge time for Spanish-speaking families was 41 minutes longer.

“We looked for all the barriers that led to a delay in discharge,” Dr. Balkian says. “Waiting for an interpreter was a major one.”

He and his team came up with a potential fix: stationing interpreters on the floors during peak discharge hours, instead of having them wait in the central language services office. The pilot was a big success and cut down on the time spent discharging Spanish-speaking patients. But when the funds needed to run the pilot ended, interpreters were pulled off the floor and the time difference between discharges rose sharply again.

Fortunately, Dr. Balkian had the data to convince administrators what a difference the innovation had made. Two years later, those data have helped revitalize the program.

“We once again,” he says, “have interpreters stationed on every floor in the hospital during peak discharge times.”

The problem
Before the pilot project, interpreters at the hospital stayed in a centralized office and were called to the wards as needed. When doctors were set to discharge a Spanish-speaking patient, for instance, they would call the language services office and get an estimated time when an interpreter would be available.

The interpreter would find the physician at the requested time. But the fact that the interpreters then returned to their office, a 10-minute walk from the inpatient units, was a problem.

“If you forgot to ask a patient a question or if something was unclear and needed clarification,” Dr. Balkian says, “you couldn’t easily get the interpreter.” While the hospital does contract for telephonic interpretation services, he points out that many conversations, especially around discharge, are much more effective face to face.

“There are disparities in health literacy between English- and Spanish-speaking patients and families,” Dr. Balkian says. “Due to language barriers and miscommunication, the family may indicate they have no further questions when they really do, so it’s critical to fully engage the family in their primary language.”

The solution
In the fourth quarter of 2010, Dr. Balkian and his team launched a pilot program, stationing one Spanish-language interpreter directly on a medical/surgical floor. That interpreter spent four to six hours each weekday on the floor during peak discharge hours, between 10 a.m. and 6 p.m. The hospital funded an additional 0.5 FTE interpreter to cover that dedicated staffing.

The embedded interpreter worked closely with physicians and bedside nurses to ensure that patients ready for discharge had complete, accurate discharge instructions in Spanish. They also accompanied physicians and nurses to answer questions patients or families had.

Having an interpreter on the floor reduced the time it took to get patients discharged, cutting the original 41-minute difference down to 23 minutes.

“Saving 20 minutes each for 700 discharges a month can make a real difference over time,” says Dr. Balkian. “Improving the timeliness of discharges can help make beds available more quickly and lead to fewer cancelled surgeries and diversions and less ED boarding time.”

Cutting down on errors
Dr. Balkian’s research team also found that the unit-based interpreter identified more errors in discharge instructions than with the traditional translation model. Closer contact may have helped families identify errors and reconcile what was written on the discharge instructions.

“We have many chronically ill patients with complex medical needs,” Dr. Balkian says. “Families need consistent information on how to care for patients at home, who to follow up with, what meds to take, which symptoms to look for and who to call if there is a problem.

Another big benefit of an interpreter on the wards was the ability to reduce the use of Spanish-speaking staff as interpreters. When a physician previously needed help, it was tempting to pull nurses or unit clerks in. But that took staff members, who weren’t trained in medical interpretation, away from their duties and put them in the middle of difficult conversations.

Expanding the program
When the pilot was completed, the unit-based interpreter program was no longer funded and the interpretation model reverted back to its original. Almost immediately, says Dr. Balkian, discharge times for Spanish-speaking patients shot up again to be 48 minutes longer on average than for English-speaking ones.

But hospital providers became vocal about the need to reinstate and expand the program. And a new director of language services was able to reinstate the program without increasing the number of interpreters.
Today, one interpreter is deployed on each of the five hospital floors, with each floor containing two units. Interpreters consistently cover one floor so they can get to know nursing and other staff. The hospital is also moving toward bedside, family-centered rounding on all units that the floor-based interpreters will take part in.

The primary goal of the unit-based interpreters is to assist with discharges, although they are also available to give quick patient updates or answer questions. More comprehensive interpretation needs, such as admission histories or family conferences, are still handled by the central language services office.

Unit design
According to Dr. Balkian, the unit-based interpreter model would work best within units that have central nursing stations surrounded by all the patient beds. The interpreter could be at the main station and easily visible.

His hospital, however, features many small nursing sub-units. To overcome that challenge, the interpreters are given hospital cell phones, and a sign-up sheet is provided where the interpreter is stationed.
“The unit-based model is very popular,” Dr. Balkian says. “Clinicians can better plan their day and not worry about interpreter availability, as they did in the past. And our Spanish-speaking patients and families truly appreciate the service.”