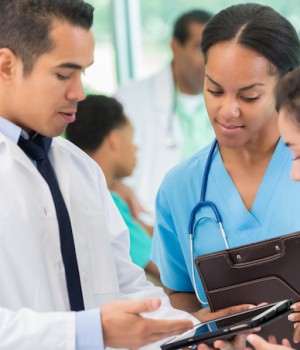 A RECENT RESEARCH LETTER contained some good news: Hospitals can significantly reduce errors related to end-of-shift handoffs by harnessing their own EHRs.

Written by researchers at Boston’s Brigham and Women’s Hospital, the letter describes the development and implementation of a Web-based handoff tool that scans patients’ records and “pulls” key information into a separate electronic handoff report. Auto-populated information includes basic demographic data and patients’ code status, allergies, medications and lab values, as well as other features like links to radiology reports.

The handoff tool also incorporates templates that allow doctors to key in information needed for a high-quality handoff. Those include details about family communication, psychosocial issues and clinical contingency plans at the end of their shift or service.

“Smaller hospitals often have more focused or streamlined IT departments.”

The concept behind the tool, according to hospitalist and lead author Stephanie Mueller, MD, MPH, was to merge handoff workflow in a way that makes sure critical information is communicated while unnecessary data entry that could spark omissions or errors is avoided. “When you update the templated fields,” explains Dr. Mueller, who is the associate director of clinical research for the Brigham and Women’s hospitalist service, “they simultaneously update the progress note.”

The results: Use of the tool led to a steep drop—62%—in errors due to communication failures, as well as in sign-out inaccuracies.

Communication lapses
The tool is designed to complement verbal handoffs by almost “over-informing” to allow for safer, more efficient transitions.

As Dr. Mueller points out, the final proprietary handoff tool—which was named Apprentice—was refined over several iterations of pilot projects and human factors analysis. The application was designed to replace what she says were “extremely variable handoff practices.” Before the hospital adopted the use of the tool, some doctors used e-mails for handoff information, while others used cut-and-pasted Word documents.

The prospective study, which was published in the August 2016 issue of JAMA Internal Medicine, included more than 5,400 general medicine and surgery patients hospitalized at Brigham and Women’s between November 2012 and February 2014.

The tool itself was implemented in February 2013. In the study, researchers identified 77 errors pre-intervention, a figure that fell to 45 after implementation. Researchers uncovered those errors through detailed end-of-shift surveys and subsequent interviews. They asked both attendings and residents to characterize the overall quality of the signouts and to describe specific problems they’d encountered.

Common complaints before the Web-based tool was in place included missing or inaccurate information; the need for additional efforts to learn about a patient because of omitted information; delays in tests, procedures or medications associated with the handoff; and errors, adverse events or near misses. Respondents were also asked to identify what they saw as incorrect orders and unnecessary (or questionable) tests, procedures, medications or therapies.

Researchers then rated the reported incidents. “Our results were largely driven by the reduction in errors attributed to communication or signout errors at the end of shift,” Dr. Mueller says.

Regionalization may have helped
The templates that doctors fill in when signing out might prompt them to warn the incoming hospitalist to watch for signs of worsening heart failure because a patient’s diuretic dose had been decreased. Or the hospitalist might alert the incoming physician that a patient has been agitated or delirious at night and might need a dose of the particular antipsychotic that previously worked well for that patient.

“The templates enable the physician to incorporate directly in the EHR things that could go wrong with that particular patient and a suggested plan for what to do about it,” Dr. Mueller says. The templated fields are designed to be edited and updated daily.

She points out that the study did not determine whether the center’s training in how to use the tool, which involved a half-day session for designated champions among the medical and nursing staff and a train-the-trainer model, had a direct impact on error reduction. That training incorporated a review of best communication practices for both verbal and written handoffs, including the structured I-PASS handoff bundle for verbal handoffs (illness severity, patient summary, action list, situation awareness and contingency plans, and synthesis by receiver) and techniques.

Dr. Mueller also notes that the handoff tool wasn’t used in isolation. Soon after the final version of Apprentice was rolled out, Brigham and Women’s implemented another large-scale quality improvement initiative: regionalizing clinical staff on the general medicine service to specific nursing units. Regionalization also put in place a one-hour overlap between the day and twilight shift (4 p.m. to midnight). That overlap helped accommodate verbal handoffs, she points out, and those staffing changes may have boosted the handoff tool’s effectiveness.

“We were pleasantly surprised when we did the analysis to see this stepwise reduction in medical error rates,” she says. While the research team didn’t study the impact of regionalization in this particular study, “I think we can speculate that error reduction was due in some part to the synergistic or additive effect of regionalization because that intervention included a lot of communication.”

Developing such a tool
The original version of Apprentice came from Massachusetts General Hospital, another Partners HealthCare facility. But use of the Apprentice application at Brigham and Women’s came to an end in 2015 when the hospital—as part of a Partners-wide conversion—switched to an Epic EMR.

Dr. Mueller points out, however, that many components of the Apprentice application, including auto-population and templated fields, were built into the hospital’s new Epic handoff portal. And like any tool related to electronic health care communication, the portal continues to evolve and is tweaked on at least a quarterly basis.

She believes that other facilities could follow her hospital’s lead and develop their own Web-based handoff tool, even if they don’t have the kind of informatics’ firepower available at Brigham and Women’s.

“Smaller hospitals often have more focused or streamlined IT departments and chains of command to get things done,” Dr. Mueller explains, “as opposed to larger institutions where it may take longer to design and implement new technologies.” In large institutions, she adds, “there are more stakeholders involved or other projects to compete with.”

As for where to start to build such a tool, here’s her advice: “Really plan for how to implement this kind of IT intervention, both in terms of how clinicians would use the tool and how you would train them to use it. Make sure any tool is actually simplifying workflow and not adding work.”