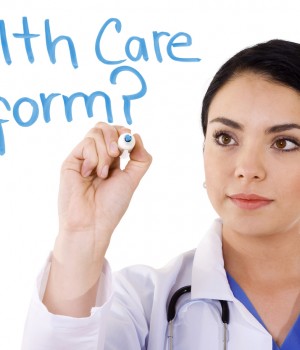 Based on conversations in the physicians’ lounge, it’s clear that I find myself in a distinct minority when it comes to health care reform, my position being that more government intervention, not less, is needed to fix this mess.

While I believe a single-payer option would be too radical of a change at present, I submit that a public option for health care insurance is a good idea. I suspect that at least 70% of physicians do not share this opinion, especially outside of academic institutions. While I’d estimate that hospitalists and other primary care doctors find themselves more evenly divided in this debate, subspecialists’ opinion seems decidedly skewed against government led reform.

Fortunately most physicians are able to have reasoned conversations on this topic without raising the absurd specters of death panels or socialized medicine. However, there’s no doubt that passion is burning hot on this topic.

My argument for more government intervention is that the devil we know is probably not better than the devil we don’t know. Health care’s versions of the “numbers of the beast” are seared into our collective brains by now: an ever-growing percentage of the GDP consumed by health care; more than 47 million uninsured; estimates that up to two-thirds of personal bankruptcies are the result of health care bills for insured patients; we spend twice as much as the closest industrialized nation with worse outcomes, based on many standardized metrics; and on and on.

As a well-insured consumer of this system, I could only shake my head when I received a bill from the hospital where my wife delivered our first child–14 months after the fact, for a portion of the charges that the insurer had ultimately denied. It took them longer than my son’s first birthday to figure this out? Small wonder that private insurance companies inflate the cost of health care by a full third. If it had taken them much longer to figure out how much I owed, perhaps I could have passed the bill on to my son on the occasion of his 18th birthday.

“Happy birthday, son! You are now a man. Your first act as an adult? Paying the bill I just received for what you now owe the hospital for being born. (Yes, that was a metaphor–or something–for the fact that we are passing today’s costs onto the next generation.)

Speaking as a provider, no wonder so many of us are looking for an exit strategy. And sadly, where many of us end up is in the new “Doc in the Box,” a cubicle in which doctors who represent either the insurers or the providers spend all day haggling over which procedures will get paid and which denials should be overturned. I recently visited one company where former hospitalists, neurosurgeons and cardiovascular surgeons were all sitting side by side on the phone, arguing the merits of approving a procedure or test with other doctors halfway across the country who (surprise, surprise!) had a decidedly different opinion. What a waste.

So, why ditch the devil we know for the one we don’t (at least not as well)? Health care is a civil right that needs to be protected. Generally, these rights are best protected by the government, not insurance companies that by their very nature look to protect their share value (and I wouldn’t expect them to act any differently.)

While some argue that we need to combine the benefits of free market capitalism with stronger government regulation, I say take a look at the financial markets to see how well that worked. Unlike stable financial markets, basic health care should be an inalienable right, similar to police protection and elementary education–services considered too important to entrust to the “invisible hand” of the free market. And when you realize that the person denying your treatment is receiving a bonus based on that decision, you have to wonder if there is not a better way.

If we assume that 10 people read this blog, perhaps a generous assumption, and that my 70% estimate is correct, then I should be reading seven heated responses shortly. Well, hold your horses–there’s more to my story. I’m not about to venture into this minefield without making it clear that I, too, have reservations about the idea of government intervention as a panacea.

Just picking up the paper two days in a row recently confirmed the obvious. Monday’s headline: “Energy Department Fails to Use Thermostats to Cut Costs.” It turns out that many of the agency’s buildings, “even at national laboratories where talented scientists seek technological breakthroughs to save energy,” fail to use that highly complex, cutting-edge technological temperature-regulating device: a thermostat. An internal audit estimated that setback points for nights and weekends would save enough energy to power nearly 10,000 homes a year. This proves a common failure of government-run programs: No incentive to fix things, nothing gets fixed.

Tuesday: “Letters Mistakenly Inform Patients of Fatal Disease.” The VA mistakenly sent a letter to “at least” 1,800 veterans, notifying them that they have Lou Gehrig’s disease.

A coding error was to blame. Oops. Not that this couldn’t happen in the private sector, but I have to believe a service-oriented industry that is not immune to litigation would be a tad more careful about misinforming people of their imminent demise.

And speaking of litigation, where is the talk of tort reform? Fixing health care means fixing this broken system as well. This is something that only the government can repair.

Yet given the dysfunction of our health care delivery system (not dysfunction of the providers; surely, there can be no doubt that there is no better collection of doctors and nurses than found in this country),; I still want to put my chips on a government option. I envision it to be essentially an expanded version of Medicare, but with a greater eye to reasoned cost control and fair provider reimbursement. To me, this would entail moving away from fee for service while still recognizing the importance of appropriate reimbursement for all providers.

What to do? Not much, I suspect. With insurance companies spending millions of dollars a day, I doubt physician voices are getting too much traction, regardless of which side of the debate they find themselves. Maybe we should just sit back and try to enjoy the show. After all, this really has become a spectator sport akin to a tennis match: watching the two sides volley back and forth, with each counter shot almost more impossible to believe than the previous one, with warnings about “death panels,” Nazi analogies and impossibly high national debt projections. Yes, indeed, this could be very entertaining … if only the stakes weren’t so high.