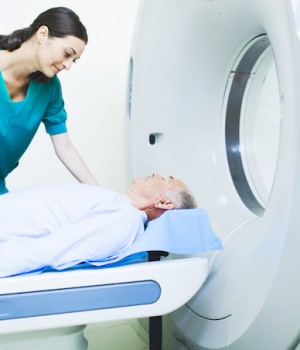 Published in the March 2006 issue of Today’s Hospitalist

Editor’s Note: This is the third in a continuing series on neurologic emergencies for hospitalists.

A 56-year-old man with a history of glioblastoma multiforme comes to the emergency room after 24 hours of increasing lethargy. While you’re talking to him, he quickly becomes obtunded and can only groan to sternal rub.

“The exam finds him afebrile, but with a blood pressure of 200/95,” said S. Andrew Josephson, MD, a neurovascular fellow at University of California, San Francisco (UCSF). The coma exam shows that the patient’s right pupil is much bigger than the left but is still minimally reactive.

During the motor exam, however, it takes deep pain to produce any withdrawal on the right side. And on the left side, Dr. Josephson said, “The patient doesn’t move at all to deep pain. This is a pretty scary situation.”

A gadolinium-enhanced MRI taken a few days before shows a large necrotic mass, in the right hemisphere, consistent with his history of primary brain tumor, with surrounding edema on the T2 sequences.

“What do you want to do first?” Dr. Josephson asked an audience of hospitalists at UCSF’s annual meeting on managing hospitalized patients last September. “Order a CT, intubate the patient, stabilize with IV mannitol, or reduce his blood pressure with IV agents?”

In reviewing the options, he said, the answer is simple: all of the above “except for reducing the blood pressure” and probably simultaneously.

“This person is herniating, and his airway needs to be protected,” Dr. Josephson said. “And even before he goes to a CT scanner, he needs some mannitol because he could be dead within minutes.”

While reducing blood pressure in patients who aren’t herniating is probably the best way to prevent a hematoma from expanding, he explained, “In a herniation syndrome, lowering blood pressure may signifi cantly reduce patients’ ability to perfuse vital parts of their brain.”

For hospitalists, the issue of how to manage intracranial pressure (ICP) is increasingly important because of a shift in attitudes of surgeons. “Neurosurgeons are asking other physicians to manage non-operable conditions such as hypertensive intracerebral hemorrhage,” Dr. Josephson said.

The key to successfully managing ICP emergencies, he explained, is managing cerebral perfusion pressure. To succeed in that arena, you need to deliver blood to critical tissues within the brain.

“When this patient is hypertensive,” Dr. Josephson said, “it’s because the cerebral auto-regulation is saying, ‘Let’s increase my mean arterial pressure to make up for my ICP that’s getting higher.’ ”

To keep the cerebral perfusion pressure at around 70 when the patient’s intracranial pressure is 30, he explained, “Your MAP better be in the 100s, or the brain is not getting perfused.”

That’s the reason why lowering the patient’s blood pressure in this case “is absolutely the wrong approach,” he added. “Start thinking about cerebral perfusion pressure rather than intracranial pressure. It’s a much more important concept.”

Here are some other steps to manage the patient’s high intracranial pressure and consequent low cerebral perfusion pressure:

“Hyperventilation works very quickly,” he explained, “but it lasts for only a couple of hours because of the buffering that occurs.” While decreased levels of PaCO2 cause the cerebral vessels to vasoconstrict, removing blood from the brain and lowering ICP, the effect lasts only for a short amount of time.

Also keep in mind that mannitol is not very useful over the long haul. “You need to follow serum osmolarity,” he said. “Once it’s above 320, mannitol is completely ineffective.”

Another strategy that is increasingly popular among neurosurgeons, Dr. Josephson added, is using what’s known as “sodium bullets” instead of “or in addition to “mannitol. “These are a solution of 23.4 percent sodium,” he said, “a 10-cc push. Increasing the sodium level to reduce brain edema may be very effective.”

“Ask the neurosurgeon if ventriculostomy is indicated,” Dr. Josephson said, pointing out that EVD is generally indicated only when there’s blood in the ventricle or some obstruction to draining of the ventricular system.

When these situations occur, draining the cerebrospinal fluid spaces through an EVD may be the only method to prevent massive hydrocephalus and herniation. Both an EVD and a bolt are useful in that they can measure ICP directly and allow for minute-by-minute calculation and monitoring of cerebral perfusion pressure.