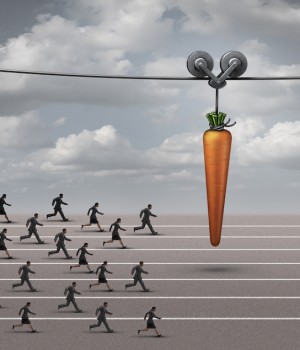 IF YOU’VE EVER DOUBTED the power of an incentive package to change behavior, look no further than the hospitalist group at Baptist Memorial Hospital-Golden Triangle in Columbus, Miss.

In 2007, the hospitalist program decided to get serious about improving its performance on measures that range from ED throughput to patient satisfaction. The group also put its money where its mouth is, linking its performance to physicians’ annual bonus.

Exactly how much bonus money is at stake? John Reed, MD, the director of Baptist Golden Triangle’s hospitalist program, declines to say. But he explains that several years ago, the program realized it had to be more competitive with pay to recruit physicians to a small town. And increasing hospitalists’ bonus pool, he says, was an important part of that strategy.

To date, the incentive program has reaped big returns. The hospitalists have dramatically improved patient satisfaction scores and core-measure compliance rates, and they’ve slashed their response time to ED admissions. That dramatic improvement in ED throughput has had another big benefit for the hospital’s bottom line, as the hospitalists have helped shave a day off Medicare patients’ length of stay.

Getting to “yes”
The group revised its incentive system by tackling an issue that’s on the top of every hospital administrator’s wish list: improving ED response time. Hospital officials had long complained about bottlenecks in the ED, but ED physicians always claimed that they couldn’t get hospitalists on the phone to admit promptly.

In 2007, the hospitalists agreed to guarantee that patients from the ED would be admitted within 30 minutes. They also agreed that their success “or failure ” on that measure would affect their yearly bonus.

To meet that guarantee, Dr. Reed explains, the hospitalist group needed to put several innovations in place. To start, he worked with the heads of several departments to create 13 disease-specific pathways to help guide the ED to call the right admitting doctor.

“If you have COPD and your oxygenation and CO2 levels are within certain parameters, you’ll go to pulmonology,” Dr. Reed explains. “Otherwise, the hospitalists will admit.”

With those clinical pathways in place, admitting hospitalists can often direct the ED physician to send the patient directly to the floor, without having the hospitalist go to the ED.

Dr. Reed also realized that ED staff needed a single number they could call to reach the admitting hospitalist. As a result, one of the two hospitalists working at any given time is now designated as the point doctor. That physician, who handles all admissions and consults for that shift, typically carries a lighter census and always has a dedicated nurse practitioner.

The point doctor carries the admissions beeper and responds to the ED. “When we really get bombed with calls, the nurse practitioner takes the beeper and fields the calls,” Dr. Reed points out.

To provide even more back-up, Dr. Reed himself serves as a float physician to be called in when the number of admissions and consults starts to soar. As the group gets bigger, says Dr. Reed, that float shift will become a permanent position.

Watching the clock
According to Dr. Reed, the group also needed to make sure hospitalists properly document the time that the point doctor agrees to an admission. Logging in the correct time used to be left up to the ED physicians, but they didn’t have any incentive to watch the clock. Now, hospitalists write down when they say “yes” on their admitting orders.

“The time from triage in the ED to a bed on the floor is the money number,” he explains. While all the hospitalists in the group “four full-time physicians and seven part-timers “can beat the 30-minute guarantee, some have driven admission times below five minutes.

During a previous iteration of the program, patient satisfaction scores were in the 40th percentile, with patients complaining that they were seeing too many physicians.

Now, says Dr. Reed, the hospitalists work a modified version of a three-weeks-on/one-week-off block. (To prevent burnout, physicians get two days off during the first week and three days off during the second.) That kind of continuity ensures that many patients see just one physician “a change that has helped push patient satisfaction scores close to the 90th percentile.

It also helps to have standing orders per diagnosis published on the hospital’s intranet site, which ensures that even part-time physicians can get orders filed quickly and consultants called.

Another factor helping reduce length of stay is that patient notes are transcribed into the hospital’s electronic system within an hour, even during the night. That puts consultants on the same page as hospitalists sooner, Dr. Reed says. He also gives some credit for reducing length of stay to the fact that three of the fulltime physicians have more than 20 years of experience.

Changing up incentives
At this point, Dr. Reed says, the hospitalists have done about all they can to lower Medicare length of stay. Further reductions have more to do with social and family issues that aren’t under hospitalists’ control.

The group also has gone as far as it can to turn around ED response times “which is why the hospitalists are retiring that measure as part of their incentive package. Instead, the group is gearing up to track its performance on new incentives, which include stroke incentive measures; a measure on completing medication reconciliation at discharge; and another on accurately documenting present-on-admission complications.

The group’s incentive program will continue to track patient satisfaction scores and core-measure performance. When it comes to core measures, the program is adding some incentives designed to reduce 30-day readmission rates for heart failure patients.

Dr. Reed says the group will also share some incentive dollars with its part-time physicians.

“They have an impact on whether we achieve our targets,” he says. “The ability to have a good handoff and treatment plan depends on us all, not just the regulars.”

Ingrid Palmer is a freelance health care writer based in West Chester, Ohio.