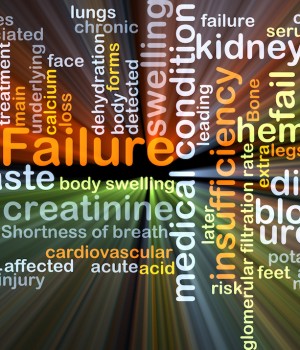 Published in the February 2012 issue of Today’s Hospitalist

When managing patients who develop acute kidney injury, it’s hard to single out the no. 1 controversy. Is it the debate over using diuretics “and if you should use them, when and how? Or is it the argument over whether patients should be dialyzed, or which prophylaxis to use for contrast nephropathy?

Unfortunately, said Sharon Anderson, MD, a nephrologist at the Oregon Health & science University in Portland, Ore., and chief of medicine at the Portland VA medical Center, these are all areas where there is not abundant ” or sometimes any “data to help guide treatment. And on an even more basic level, there are concerns about how to most effectively diagnose the condition.

Dr. Anderson, who spoke about acute kidney injury at last fall’s management of the hospitalized patient conference at the University of California, san Francisco, said that’s why hospitalists should never fail to ask nephrologists for a consult when they have a patient with acute kidney injury. And they should ask “sooner rather than later.”

She pointed to data from a study published in the September 2011 Clinical Journal of the American Society of Nephrology, which showed the benefit of an early nephrology consult for these patients. That study linked early consults to less need for renal replacement therapy and less dialysis, shorter hospital stays and all around better outcomes. “we can do more for your patients if we hear about them before they need to head to the dialysis unit,” she explained.

As for making treatment decisions for patients suffering from acute kidney injury, Dr. Anderson shared some of the strategies she uses to navigate around the scant evidence.

Diagnosis controversies
Acute kidney injury (AKI), formerly known as acute renal failure, is present in 5% of hospital admissions and 30% of ICU admissions. According to Dr. Anderson, the condition currently complicates 25% of inpatient stays, and rates are increasing as the population ages.

Physicians are increasingly recognizing that “severe or recurrent acute kidney injury is a risk factor for chronic kidney disease,” she pointed out. And the condition is now viewed as a harbinger of vascular disease.

“The kidney really is the canary in the coal mine of the cardiovascular system,” Dr. Anderson said. “If your patients drop their GFR every time their blood pressure goes down a little bit, that’s telling you they have vascular disease.”

Acute kidney injury is a particular concern for the elderly both because it is more common in that population and because of its relationship to cardiovascular disease. The condition increases the risk of a cardiovascular event, and cardiovascular problems are among its own risk factors.

In addition, elderly patients face all sorts of other issues that increase their risk of suffering acute kidney injury. Those range from hypoalbuminemia, oxydative stress, and acute and chronic inflammation, Dr. Anderson said, along with “patients’ comorbidities and all the drugs we give them.”

Classically, doctors pick up AKI by looking at serum creatinine levels. The problem with that approach, she said, is that “the serum creatinine doesn’t even start to go up until you’ve lost half of your kidney function.”

If the general principle is to diagnose early so you can treat early, Dr. Anderson said, a delayed diagnosis can be a problem. “If you’ve lost half of function before you figure out what’s going on, that doesn’t help patients,” she explained.

Ongoing research into biomarkers that can help identify kidney function loss early is promising, but not yet available for clinical use. Physicians had hoped “eGFR” (an automated GFR) would be helpful, and it has been for identifying chronic kidney disease.

“But it’s not useful in acute renal failure,” Dr. Anderson said. The eGFR is particularly unreliable “in situations where the patient is sick and the creatinine is acutely changing,” she added. “And that is the definition of acute kidney injury.”

Making the diagnosis
The best way to diagnose the cause of AKI is by taking a careful history and looking specifically at drugs. “There are many drugs that affect kidney function, that are nephrotoxic or can impair the kidney’s ability to recover from other things,” Dr. Anderson pointed out. The first order of business is to order a urinalysis with microscopy.

To determine if patients are prerenal, it helps to look at the fractional excretion of sodium, particularly if the patient isn’t on diuretics. But keep in mind that the tests available are “not great.”

Ordering an ultrasound to look for an obstruction is also important, although it is clear that many ultrasounds are “overused” and wasteful, Dr. Anderson noted.

“The patient who has no risk factors for obstruction and who had a negative ultrasound last month is probably still going to have a negative test,” she said.

As a result, Dr. Anderson tends to carefully time her use of ultrasound. “Don’t always order it on the day that acute kidney injury is diagnosed,” she said, “but don’t forget about it either.”

You don’t want to find out that a patient who has acute tubular necrosis because he is septic is also obstructed. For septic patients, she said that it is reasonable to start volume resuscitation and get antibiotics on board.

“If things don’t clear up in a day or two,” Dr. Anderson said, “then think about getting an ultrasound, especially in a male patient, in the absence of obvious risk factors for obstruction.”

“All of these estimates are based on the premise of consistent urinary creatinine excretion, and in acute renal failure, it’s not consistent,” said Dr. Anderson. ” Wait until the patient has recovered and is in a steady state. Then you can look for albuminuria and proteinuria and work it up as appropriate.”

Diuretics
Although the first “and often correct “reaction to diagnosing acute kidney injury is to stop diuretics, Dr. Anderson said there are times when “it’s not the right thing to do.”

She noted that one ongoing randomized trial is investigating whether to diurese people recovering from acute kidney injury. That study is asking if giving furosemide to ICU patients with AKI provides any benefit or if it worsens the severity of the injury, as some believe.

If patients are severely volume depleted or septic, Dr. Anderson said, stopping the diuretic is obviously the right course. But patients with cardiorenal syndrome can improve with diuretics. And, she noted, there is “more and more evidence that letting patients get too volume overloaded in the course of their acute kidney injury is really bad.”

At this point “and until better studies are completed ” Dr. Anderson said her general advice is to stop giving fluids at some point in the course of acute kidney injury, and then consider diuretics. But “holding diuretics throughout the entire course of admission for acute kidney injury may not be the best thing for the patient,” she noted.

Bolus or continuous infusion?
The best way to give diuretics is also controversial. A study in the March 3, 2011, New England Journal of Medicine, for instance, compared bolus to continuous infusion. Researchers found “no significant differences” in how patients felt or how well they recovered from decompensated heart failure.

There was more diuresis on the higher doses, whether continuous or bolus, but route of administration made no difference. “It was an interesting study,” Dr. Anderson said, “but there are still questions out there that need answers.”

Then there’s the problem of what to tell patients at discharge. Commonly, when diuretics are stopped for patients who suffer from AKI during their hospitalization, physicians fail to restart the drugs at discharge.

Nine times out of 10, these patients are readmitted with decompensated congestive heart failure,” Dr. Anderson noted. Instead, patients need to go home with more diuretic than they came in on, not less.

You are the doctors there at the time of discharge,” she said. “Look and see what people came in on, and make sure they go home on at least that much. When they go home, they’re going to start eating a regular diet, and they will need their diuretics again.”

Dr. Anderson also had this advice for hospitalists treating patients with heart failure. “Don’t worry solely about the creatinine levels,” she said. “Don’t sacrifice the patient to save the kidneys.”

She recommends requesting dialysis only if you think you need it to manage a patient’s volume or potassium levels. “There’s no reason to do it just because you think it might change the outcome,” said Dr. Anderson.
One area where there is solid evidence is the dialysis dose. A large VA/NIH trial published in the July 3, 2008, New England Journal of Medicine found that less was just as good as more (low dose vs. high dose). Receiving more dialysis didn’t improve patients’ chances of survival or recovering kidney function. More dialysis was also associated with side effects like hypotension, hypophosphatemia and hypokalemia.

“We have altered our CRRT recipe to provide a lower dose of dialysis,” she said. “It’s saving us money because we know that giving more isn’t going to make any significant difference.”

“I’ve changed my practice in the last year or two,” Dr. Anderson said, “and I just recommend normal saline.” While contrast nephropathy is a serious problem, cardiologists and other physicians sometimes overreact by avoiding contrast procedures that patients need. Some providers, Dr. Anderson argued, are guilty of discriminating against renal patients and underusing coronary angiography for them.

An important paper on this “renalism,” she said, was published in the Journal of the American Society of Nephrology on Sept. 1, 2004. It found that elderly patients with chronic kidney disease may not be getting the coronary angiograms they need “because everybody’s afraid of contrast nephropathy.” But not taking care of patients’ heart disease results in a higher death rate.

“We are not doing them a service by denying them an angiogram just to buy them a little more time off of the dialysis machine,” Dr. Anderson said. “We have to continually educate our patients, cardiologists and hospitalists about this reluctance to refer patients at high cardiovascular risk.”

DURING A SESSION ON ACUTE KIDNEY INJURY (AKI) at this year’s management of the hospitalized patient conference at the University of California, San Francisco, nephrologist Susan Anderson, MD, outlined the condition’s common causes: