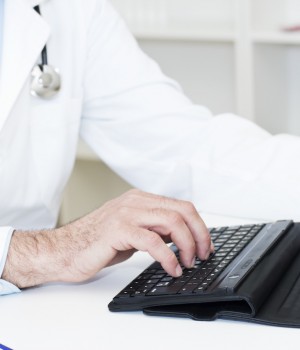 BEFORE I BEGAN WORKING as a part-time locum hospitalist, I practiced internal medicine and was an infectious diseases specialist. During my ID fellowship, I remember my division chief describing the ideal universal antimicrobial.

Such a product, he explained, needed to be effective against all known pathogens, nontoxic, easy to administer by any route, not encourage resistant organisms and be inexpensive. He called it “panaceamycin” and noted that if any such drug ever became available, “our specialty would be out of business.”

Although no panaceamycin is on the horizon, there is a possible cure for a condition that afflicts virtually all hospitalists: EMRitis. In the past 10 years, I’ve worked at 18 different hospitals with many different EMRs. But I can’t count how often I have heard hospitalists complain, “I am spending way more time with the computer than with patients.”

Obviously, EMRs deliver substantial benefits, but hospitalists have de facto taken on many clerical duties previously done by transcriptionists, unit secretaries and billing clerks. In part, that’s because most hospitals provide some transcription services, but not for progress notes. CPOE makes this bad situation worse. Hospitals and EMR vendors have devised order sets and templates to streamline physician workload, but these systems can still require 10 clicks to do something as simple as order an aspirin.

Then there’s coding and billing, which new ICD-10 requirements make even more challenging. Notes now need highly specific documentation, yet another computer chore being pushed to the end of a shift or to a physician’s days off.

A universal language
When I worked in traditional primary care, I dictated all my hospital notes using a portable tape recorder, a service I paid for myself. I could dictate a good progress note in less than 60 seconds, while it would take me five to 10 minutes to write it out.

After finishing rounds, I handed the charts to the secretary for order entry and refiling. I wrote my billing information on cards listing the diagnoses and charges for the day, then turned those over to the billing clerk back at the office. All decidedly “old school,” but by delegating nonphysician tasks to clerical staff, I could spend my hospital time at the bedside.

How could this paradigm be digitized? We often look to the airline industry for solutions to systemic medical processes. Air traffic controllers and pilots flying internationally use only one language to communicate: English. Imagine what would happen if they did not speak the same language.

For the same reasons, we need a universal EMR software program for every hospital, a product we could call “Panacea.” The VA’s system is a good example. Despite all the VA’s recent problems, the agency has an outstanding EMR, which can be accessed from any VA hospital in the country.

But competing hospitals in the same community choose different software packages. If a patient seen at hospital A is admitted to hospital B, important information can’t be digitally shared. You can ask for a paper hard copy of the chart, but that requires the patient’s permission, copying and faxing, and critical time may be lost.

Existing technology
To input information, I’d suggest an old tool: dictation. Fortunately, we have improved voice-recognition technology, and I had the pleasure of using such a product (Medical Dragon by Nuance) in one North Carolina community hospital.

I was amazed how quickly the program learned my voice. (The company makes versions for physicians with foreign accents or regional dialects.) Transcription errors were few and far between; problems occurred less than 1% of the time and were easily corrected. My dictation appeared on the computer screen within seconds.

Voice recognition would also be a good solution for CPOE and billing, although this process would need to be more sophisticated because it requires feedback and interaction with the computer.

Let’s call the interactive computer “HAL,” with a nod to Arthur C. Clarke’s 1968 book (and subsequent movie), “2001: A Space Odyssey.” Once you admit a patient with pneumonia and complete your dictated H&P, you would simply say, “HAL, please bring up the community-acquired pneumonia protocol.” With the protocol on the screen, you could order elements verbally or click through.

You could also verbally order medications, labs or X-rays. Should you need a consult, you would simply say “consult pulmonary,” and the names of potential consultants for that day would appear on the screen. The computer could then call or page the person you select with instructions to call you back on your mobile device. Sound farfetched? This type of voice-recognition software is already in most new cars and on every smartphone.

For billing, simply say, “billing,” then list up to four diagnoses in order of importance. HAL would assess your documentation and assign the correct codes and billing E/M charges. With one click on “submit,” you would have completed notes, orders and billing all at once.

The roadblocks
We have the technology, so why don’t we use it? The roadblocks reside within hospital systems and EMR vendors. These companies compete with each other and have no financial incentive to cooperate with a universal system.

Hospitals have already saved money on having fewer clerical staff and transferring those tasks to doctors. They may have little financial incentive to relieve physician employees.

These changes may take another act of Congress. After all, it was Congress that mandated the use of EMRs in 2009 in the first place. Unfortunately, the government left it to the free market to come up with a plan, and the result is our current Tower of Babel. We need to replace this polyglot with one universal, user-friendly voice-recognition software program that all providers in any location could use.

Arthur Clarke’s HAL malfunctioned (and ultimately became homicidal). But I see the computer as the cure we need. Someday, we may begin our hospital workday with, “Hello, HAL. Who do we have to see today?” As the screen comes to life, our rounding list appears and HAL replies, “Good morning, doctor. Let’s get started.”

These systems can still require 10 clicks to do something as simple as order an aspirin.

Stephen L. Green, MD,  is a locum hospitalist who maintains a telemedicine infectious disease consulting practice. He previously practiced for more than 30 years as a primary care internist and infectious diseases specialist.  Dr. Green can be reached at sgreen5528@aol.com.