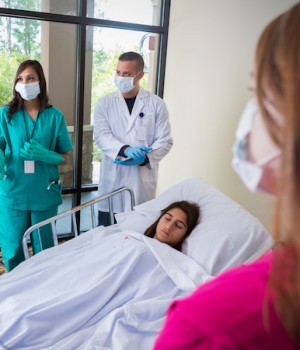 The hospital was able to contain the bacteria’s spread and then eradicate it in a matter of weeks. But to do so entailed pulling out all the stops, according to one of the hospital’s infection preventionists, Beth Wallace, MPH, CIC.

At the July meeting of the Association for Professionals in Infection Control and Epidemiology, that effort was lauded as an all-too-rare example of how to control a superbug that a growing number of hospitals encounter. (Details of the effort were published in the June 2010 issue of the American Journal of Infection Control.) The key, Ms. Wallace says, was “everybody doing everything to stop it.”

“Everything” meant the administration approving a comprehensive plan to do all that was needed, including opening a closed ward to cohort affected patients. It meant doctors and nurses gloving and gowning for every patient in both affected wards. It meant lab technicians running additional surveillance cultures on every patient in several units. And it meant cleaning staff removing and cleaning air ducts in all critical care rooms.

Who’s high risk?
Outbreaks of Acinetobacter baumannii (this strain is known as XDR-Acinetobacter, which stands for “extensively drug resistant”) typically occur in ICUs, according to the CDC. The bacteria were discovered in the wounds of troops returning from Iraq. But Ms. Wallace says that at Methodist Dallas, “We now see it in patients admitted from long-term care facilities.”

While the bacteria pose little risk to healthy people, they can significantly delay treatment efforts and hasten death in those who are already very ill or have a weakened immune system, chronic lung disease or diabetes. Because the bacteria are passed from person to person, or from contaminated surfaces or environment, the hospital’s containment efforts had to be multifaceted. XDR-Acinetobacter is resistant to most antibiotics with the possible exception of colistin, an older therapy that had fallen out of favor because of its risk of kidney damage.

Containment efforts began when the four cases turned up among the hospital’s 515 beds. Most were detected during the routine admission surveillance swabbing and culturing that the hospital began five years ago for all patients considered to be at high risk for a drug-resistant organism. That surveillance protocol involves initiating contact precautions and cultures on all patients admitted from outside health care facilities, those who’ve been admitted to any hospital in the last 90 days or those with draining wounds present on admission.

“Most health care facilities doing active surveillance look for MRSA or MRSA and VRE,” Ms. Wallace says, “but we also look for the resistant gram-negatives.” Cultures are taken from a number of sites on suspected patients, she adds, “and we isolate high-risk patients on admission.”

It was concerning when four cases were found in one week in one week. “Normally,” she says, “we go several weeks without a case, so this really caught our attention.” Three of the first four patients were in the hospital’s cardiac care unit, and one was in the surgical intensive care unit. All four had bacteria in their respiratory tracts.

These included endotracheal aspirates for anyone on a ventilator, sputum cultures if patients were not intubated but had a productive cough, cultures from all draining wounds, and rectal swabs on all patients, Ms. Wallace says.

Over seven weeks, a total of 13 patients were found with XDR-Acinetobacter, 11 of which ultimately were determined by molecular analysis to be genetically identical. Most of these patients, says Ms. Wallace, were not actively infected but colonized.

“Every single patient in both units was placed in contact precautions,” she notes, whether or not they were colonized. And because the bacteria can survive on surfaces for months, “cleaning absolutely was part of the control effort.” Regular hospital-grade disinfectants kill XDR-Acinetobacter, so no special cleaning supplies were required “just very thorough, meticulous cleaning.

That included all common areas, such as nursing stations and medication rooms. When critical care rooms were empty, the physical plant department removed the air ducts and cleaned them.

One environmental culture taken from a return air vent was found to be positive for the strain common to most of these patients. But while Ms. Wallace says the hospital assumes the strain was brought in by a patient found to be colonized on admission, the infection control team was never able to definitively determine where it came from.

The ability to cohort patients
As more colonized patients were identified, Ms. Wallace says, “we tried to cohort the affected patients so we didn’t have providers crossing from them to patients who didn’t have XDR-Acinetobacter.” That was possible because the hospital opened a wing over the course of one weekend as a special telemetry-capable unit.

Ms. Wallace admits that the cohorting effort was the most difficult of all the interventions. “The number of patients that we had at any given time would fluctuate, or the patients would improve and they wouldn’t need the intensive level of care,” she points out. That made it a challenge to maintain the appropriate ratio of nurses to patients.

Still, she credits cohorting with helping to bring the outbreak under control, along with the contact precautions, hand-hygiene reminders, surveillance culturing and more frequent rounding by an infection control expert on units with infected patients.

As for the contact precautions, Ms. Wallace says, “that is a burden on health care workers, and we tried to be a sounding board for them sometimes.” The hospital’s extensive educational efforts for staff included a fact sheet that nurses could use to both educate themselves and families.

It was also important, she adds, for hospital workers and the community to understand that while the bacteria prey on debilitated patients, particularly those with invasive devices, staff and family members weren’t at significant risk, as long as they followed precautions, including hand hygiene.

The majority of patients who became infected, Ms. Wallace says, were adequately treated and discharged. While a small minority of affected patients died, those deaths “after extensive investigation “were deemed to be due to patients’ underlying critical conditions, not to XDR-Acinetobacter.

After seven weeks of the hospital’s multi-pronged attack, no additional cases were identified. The lab continued biweekly surveillance checks for two more weeks. Only when those checks all came back negative, says Ms. Wallace, were contact precautions lifted.

Deborah Gesensway is a freelance writer who reports on U.S. health care from Toronto.