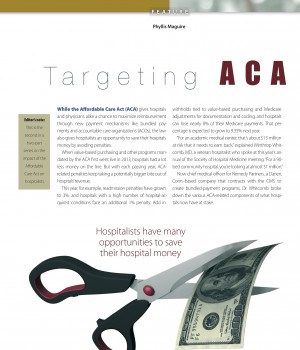 Editor’s note:
This is the second in a two-part series on the impact of the Affordable Care Act on hospitalists.

WHILE THE AFFORDABLE CARE ACT (ACA) gives hospitals and physicians alike a chance to maximize reimbursement through new payment mechanisms like bundled payments and accountable care organizations (ACOs), the law also gives hospitalists an opportunity to save their hospitals money by avoiding penalties.

When value-based purchasing and other programs mandated by the ACA first went live in 2013, hospitals had a lot less money on the line. But with each passing year, ACA-related penalties keep taking a potentially bigger bite out of hospitals’ revenue.

This year, for example, readmission penalties have grown to 3%, and hospitals with a high number of hospital-acquired conditions face an additional 1% penalty. Add in withholds tied to value-based purchasing and Medicare adjustments for documentation and coding, and hospitals can lose nearly 8% of their Medicare payments. That percentage is expected to grow to 9.35% next year.

“For an academic medical center, that’s about $13 million at risk that it needs to earn back,” explained Winthrop Whitcomb, MD, a veteran hospitalist who spoke at this year’s annual Society of Hospital Medicine meeting. “For a 90-bed community hospital, you’re looking at almost $1 million.”

Now chief medical officer for Remedy Partners, a Darien, Conn.-based company that contracts with the CMS to create bundled-payment programs, Dr. Whitcomb broke down the various ACA-related components of what hospitals now have at stake.

Value-based purchasing
To start, Dr. Whitcomb looked at the value-based purchasing program. Under this program, the CMS withholds a portion of hospitals’ base DRG payments. Hospitals can then earn that money back depending on how well they perform in four areas: clinical process, outcomes, patient experience and efficiency.

When value-based purchasing first debuted, it featured clinical process measures “for our usual cast of characters: heart failure, heart attack, pneumonia and surgical care measures,” Dr. Whitcomb noted. Now, however, patient experience “has come on big time,” and the program has evolved to focus much less on process measures.

Instead, clinical outcomes are given more weight. “Outcome measures are not tied to huge dollars,” Dr. Whitcomb pointed out, “but they’re not nothing.” One new outcome metric this year is a 30-day mortality measure for heart failure, heart attack and pneumonia.

Also factored in the outcomes mix is catheter-associated bloodstream infections and what’s known as PSI 90, a weighted average of the observed-to-expected ratios for a host of patient safety indicators including pressure-ulcer and postop-sepsis rates.

For the first time this year, the CMS launched an efficiency measure: Medicare spending per beneficiary. It now makes up 20% of value-based payments at risk, a percentage that will grow to 25% next year.

Hospitalists can certainly move the needle a bit on their hospital’s performance in terms of process measures and some HCAHPS domains, including pain management, communication about medicines and discharge information.

And while Dr. Whitcomb described the new 30-day mortality outcomes measure as “of limited value,” he urged hospitalists not to shrug it off. “You should focus on a couple of things because everybody should at least be thinking about mortality,” he said.

First, hospitals should have good early warning and rapid response systems in place, or at least an initiative. Hospitalists should also take a look at the quality of resuscitation efforts in their hospitals, Dr. Whitcomb said, because this can be an important driver for mortality. Palliative care is another way to influence mortality rates, either through consults with palliative-care specialists or through hospitalists delivering that care themselves.

And “always answer the queries of clinical documentation improvement professionals,” Dr. Whitcomb said. “That optimizes “and notice my choice of words “your illness severity and mortality risk.”

As for central-line bloodstream infections, a well-publicized bundle of interventions has been proven to sharply reduce those. “The one thing every hospitalist needs to know about that central-line bundle,” he noted, “is how to assess when to remove the line.”

Readmissions
Hospitalists are acutely aware of the penalty pegged to 30-day readmissions. But as Dr. Whitcomb pointed out, “readmissions aren’t just readmissions any more.” Instead, readmissions also put hospitals at risk for less reimbursement related to bundled payments and ACOs.

In 2014, two-thirds of hospitals received some form of readmission penalty. That percentage, said Dr. Whitcomb, is expected to grow to 75% this year, although only 1% of hospitals are expected to receive the maximum penalty. In 2015, COPD and knee/hip arthroplasty were added to the list of conditions for which readmissions are being tracked.

To reduce readmissions, he explained, hospitalists should all be thinking about four things when doing a discharge: assessing a patient’s risk of readmission, doing targeted interventions based on that risk, providing effective education about the discharge plan and ensuring some post-discharge communication.

Readmission risks
As for assessing readmission risk, “whether patients are on a high-risk medication, are depressed or have poor social support, or you wouldn’t be surprised if they died in the next year, don’t just say, ‘OK, that’s a risk,'” Dr. Whitcomb pointed out. “Create interventions to mitigate that risk.”

Those might include a palliative care or psychiatry consult, or having a pharmacist come and teach the patient about a high-risk medication such as an anticoagulant.

But as one audience member pointed out, evidence doesn’t solidly back the effectiveness of any one strategy to reduce readmissions or improve care transitions. In response, Dr. Whitcomb said he believes that hospitalists need to group several interventions together.

“I definitely think some sort of contact with patients after they leave the hospital is important,” he said. “What we’ve learned in the bundled payment world is that social issues can be more important than medical ones.”

There is, he added, “a huge network of social services out there that very few people know how to access that provides transportation, housing, food or day-care programs. Paying attention to the social determinants of health is where it’s at, to a large degree.”

“More than 700 hospitals received a penalty as part of the HAC-reduction program,” Dr. Whitcomb said. The program this year includes catheter-related bloodstream infections and pressure ulcers. In 2016, the CMS will add surgical site infections to the list of hospital-acquired conditions; in fiscal year 2017, the list will grow to include MRSA and C. diff.

What can hospitalists do to help their hospitals avoid penalties? “Each hospitalist should have some kind of committee involvement and some incentive around being involved,” he said.

Hospitalists should also go to their director or vice president of quality to review the value-based purchasing and penalty programs, and ask, “Where are your pain points, and how can we help?”

Another meeting that Dr. Whitcomb thinks hospitalists should have: getting a cup of coffee with their director of finance. “The finance people want to understand the connection to the clinical world, just as you need to understand the financial implications of these programs in your hospital.”