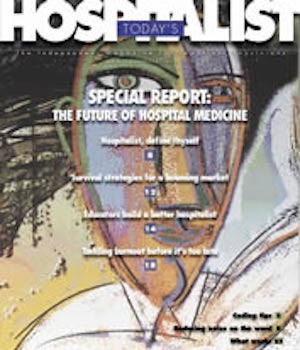 Published in the April 2004 issue of Today’s Hospitalist

When John F. Cramer, MD, started a hospitalist program in January of last year, he wondered how local physicians would react to the service. Within a matter of months, he was wondering how he was going to keep up with the demand.

Just nine months after Dr. Cramer launched the hospitalist service at Providence Everett Medical Center in Everett, Wash., all but two of the medical center’s primary care physicians were referring their patients to the hospitalist service. At the same time, many area subspecialists were sending their patients to his program, creating a surge in volume that has at times been difficult to handle.

While that success has been a nice surprise, the service has struggled with the volume. Call it too much of a good thing, but hospitalists like Dr. Cramer say they are struggling to keep up with the booming demand for their services.

As hospital medicine explodes in U.S. health care, hospitalists are finding golden opportunities to advance their careers, their programs and their specialty. Physicians like Dr. Cramer are also discovering first-hand, however, that such rapid growth can present its own difficulties.

Here’s a look at how three hospitalists are being affected by the specialty’s rapid growth.

“Our biggest problem is making sure that the team is right-sized to the volume,” Dr. Cramer says. For him, that means an almost constant search for new hospitalists “and more than a little anxiety about the workload of his current staff.

“I’m keeping my fingers on the mental health of the team,” Dr. Cramer explains. “There’s a sweet spot in the ideal number of patient contacts per day, and we’re above that.”

He expects his volume to keep building, in part because of subspecialty referrals. “As time goes on, specialists are going to want to do fewer admissions,” he predicts. “We’re happy to do it as long as we have enough staff.”

While subspecialists are an important source of referrals, he notes that complications can arise when there is confusion about exactly who should admit a patient.

Take the example of a healthy young man with a GI bleed. “The gastroenterologist is going to do endoscopy and send the patient home,” Dr. Cramer explains. “It’s totally redundant to have a hospitalist on the case. On the other hand, if the patient is over 70 and has COPD and diabetes, it might be more appropriate to admit him to the hospitalist team.”

The solution, Dr. Cramer says, is to create protocols spelling out exactly what services hospitalists provide and what types of patients they’ll admit.

“We’ve written all of that down and had the gastroenterologists agree to a list of conditions and cases that they will admit,” he explains. “We’re kind of feeling our way specialty by specialty and trying to figure out who admits what.”

Laura Nelson, MD, medical director of the north division of the Marshfield Clinic, agrees that working with specialists requires some up-front effort. The hospitalist service in her division of Marshfield, a multispecialty clinic in Wisconsin, has worked closely with subspecialists to develop protocols spelling out the care certain types of patients will receive.

She also says that she sees working with subspecialists as a major opportunity for hospital medicine.

Because Marshfield has locations in some fairly rural areas, it has trouble recruiting certain subspecialists like endocrinologists and nephrologists. By caring for those subspecialists’ inpatients, she explains, hospitalists help everyone in the system “and carve out a valuable role for themselves.

“It’s hard to recruit those subspecialists, so you have to free them up to do consults,” Dr. Nelson says. “We can manage the medical aspects of these patients for the subspecialists. That’s an opportunity to help offset the shrinking pool of some subspecialists.”

Dr. Nelson says that Marshfield supports the hospitalist service because it helps the group’s physicians work more efficiently. “They don’t have to run back and forth to the hospital all day,” she explains.

While the service is in demand, she notes that it can be difficult to put a price tag on the value that the service brings.

“The hospital has to decide what value a hospitalist program brings,” Dr. Nelson explains. “Sometimes it means someone will be on site 24/7. It could be that we’re reducing the cost of care by following guidelines and using appropriate but less costly medications. It could be that there is always someone right there to look at an EKG if somebody takes a turn for the worse.”

While it may be difficult to put a price tag on a hospitalist group’s services, it is a necessary part of the process to secure financing to grow. The dilemma is that to effectively make your case, you’ll need to invest some time and money in systems to track how your efforts are panning out.

The challenge, particularly for new groups, is finding the time and money to build systems to collect and report those data. “The first year of a program is really tough,” he acknowledges. “You’re new to the hospital and the community, and you have new physicians coming in.”

Dr. Greeno says Cogent has been able to build sophisticated data systems in part because it can spread the costs of these systems across its many practices. He acknowledges that smaller groups, however, will have a difficult time building data collection systems on their own.

“If you do a really good job, fee-for-service billings will support your physicians,” he explains, “but they won’t support anything else.”

On the up side, he says, there are big benefits to be derived from hospitalist programs, even if they can’t collect detailed information. While these programs probably can’t offer the same level of quality improvement initiatives as more complex services, Dr. Greeno explains, “they’re still better than the old model, which is why the specialty is growing so fast.”

He adds, however, that all programs can expect to get more involved in building systems to manage information and demonstrate their value. “The next 20 years will be spent taking advantage of the potential that this model can bring,” he says. “That will take more sophistication, more systems, better operational models, and highly incentivized physicians.”