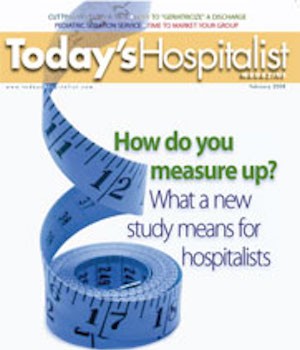 When Edgar Ardila, MD, read the results of the latest study comparing the performance of hospitalists to community-based physicians who still see patients in the hospital, he was surprised.

That’s because Dr. Ardila, medical director and founder of Inland Hospitalist Medical Group in Riverside, Calif., regularly compares how the hospitalists in his group stack up to outpatient physicians. While the average length of stay for Medicare patients in his market is about 6.5 days, the average for his group is 4.3. “That’s better than 30%,” he says.

But the study, which appeared in the Dec. 20, 2007, New England Journal of Medicine, found that hospitalists shaved off only 0.4 days from length of stay when compared to general internists and family physicians. While that’s a 12% advantage, it’s nowhere near the figure that Dr. Ardila “and hospitalist groups around the country “use when they compare themselves to outpatient physicians.

Finally, researchers found no difference in inpatient mortality or 14-day readmissions among the three groups.

How does Dr. Ardila reconcile the data on his eight-physician group with the results from the latest study? It’s a question that hospitalist program directors across the country are grappling with, particularly if they’re dealing with hospital administrators who have read the research and are asking tough questions.

An “extraordinarily meaningful” intervention
The study looked at data collected between 2002 and 2005 from 45 hospitals that are part of the Premier Healthcare Informatics database. That makes it the single largest published study of hospitalist groups.

Because of its size, the study has attracted considerable attention “and produced a curious range of reactions. The Wall Street Journal, for instance, stated that the “only modestly lower treatment costs …. might damp enthusiasm” for what the article noted was the rapidly growing specialty of hospital medicine.

Many hospitalists scoff at the idea that a difference of almost half a day will “damp enthusiasm” for hospitalist medicine. For one, a 0.4 length-of-stay difference produces tremendous savings when multiplied by thousands of hospitals and hundreds of thousands of patients.

The study’s lead author, hospitalist Peter Lindenauer, MD, MSc, puts the study’s supposedly modest findings into context with a back-of-the-envelope calculation from his own institution. Because Baystate Medical Center, a community-based teaching hospital in Springfield, Mass., where he is medical director of clinical and quality informatics, has observed similar reductions in length of stay, it makes for an easy comparison.

With the hospitalists at Baystate treating nearly 15,000 patients a year, a 0.4-day length of stay reduction opens up 6,000 more bed days, Dr. Lindenauer points out. Given the hospital’s average length of stay, that translates into 1,500 more potential admissions per year.

“To a chief operating officer of a hospital struggling with capacity and throughput issues,” says Dr. Lindenauer, “a 12% reduction is extraordinarily meaningful.”

Or take the $268 in savings per case that study authors found that hospitalists produced when compared to general internists. If you apply those savings to the number of U.S. patients admitted by hospitalists each year, “that’s $5.36 billion in savings,” says Adam Singer, MD, chief executive officer of IPC-The Hospitalist Company. “Those numbers are profound.”

A new value equation
Experts say that part of the glass-half-empty reaction to the figures stems from the fact that the cost savings found in previous studies on hospitalist care were markedly higher.

Those studies “which focused on only single sites and many fewer physicians “found that hospitalists could save hospitals between 10% and 15% per case, points out Robert Wachter, MD.

“Part of the reason the field grew so quickly was really impressive efficiency advantages,” says Dr. Wachter. Those knock-out length-of-stay and cost reductions, which certainly raised administrators’ expectations, were needed at the time, he adds, “to break through inertia” and propel the field forward.

Now, however, the yardstick used to measure the value of hospitalist care has grown well beyond just that initial cost equation. While hospitalists to some extent still live and die by the sword of cost and length-of-stay savings, says Dr. Wachter, they now produce value in equally important areas. Those include solving the access crisis of ED unassigned patients; helping hospitals cope with work-hour rules; and leading the charge in areas like quality improvement and safety.

“If this study had come out with those differences in costs in 1997, it would have slowed down the movement considerably,” Dr. Wachter says. “Coming out in 2007, it doesn’t do very much because the motivations are so much more diverse and rich. You can’t put this genie back in the bottle.”

Does the broad view apply?
While the study may not set hospital medicine back, physicians point out that the findings are already cropping up in discussions with hospital executives.

For instance, Stacy Goldsholl, MD, president of TeamHealth Hospital Medicine, says that the data have been mentioned by both current and prospective clients. “They’ve said, ‘Geez, can’t you do better than that?’ ” Dr. Goldsholl reports.

Her response? “I tell them that it’s a very broad-stroke look at hospital medicine, which “once you take physician experience, patient population, and the lifespan and maturity of a program into account “may not apply to individual programs.”

And while no one is criticizing the study’s methodology, hospitalists say they would like to see more details that were not reported. The study, for example, relies on self-reported classifications of who is and who is not a hospitalist, a factor that study authors acknowledged could mean that some physicians were misclassified.

“Without that clear and distinct definition of what constitutes a hospitalist, it’s hard to make any broad conclusions on what is the efficacy,” says IPC’s Dr. Singer. “You really need to know what you’re talking about.”

Dr. Singer also points out that more than half of the hospitals included in the study database were from the South, where most hospitalists work at hospital-employed groups. “That could very much change these results,” he explains.

Dr. Goldsholl from TeamHealth likewise notes that the study did not drill down to examine trends by employment model, and that it didn’t look at relationships between hospitalist workload and quality outcomes.

“Were these first-year programs where you may not see a significant decrease in length of stay?” she asks. “Or were they fully mature programs that had already reaped the big savings and the medical staff had raised its standard?”

Fallout
How might the study affect individual hospitalist programs? Dr. Wachter says he expects that a few hospital administrators may focus only on cost-saving data and try to scale back on a group’s financial support “only to have those physicians end up in a practice across town.

Dr. Ardila in Southern California, however, says that many general practitioners who have small or not-so-busy outpatient practices still follow their patients into the hospital. They may, he says, try to make hay out of the results.

“Some office-based physicians still see hospitalists not as a commodity, but as competition,” Dr. Ardila explains, adding that none of the three hospitals that his group covers gives his program any subsidy. “They would be the first ones to use these findings and say, ‘You see, there is no difference. We would be just as good docs in the hospital as the hospitalists.’ ”

Dr. Ardila plans to counter that argument by pointing out that his group not only reduces length of stay, but also gets better marks than outpatient physicians for patient satisfaction and family communication.

Others predict that researchers will shift their focus to other types of studies. In an editorial that accompanies the Lindenauer study, Laurence McMahon, MD, noted that it’s “time to move on” from studies that simply compare hospitalist care to non-hospitalists.

Dr. Lindenauer agrees. “This is likely to be one of the last studies focused on making this type of comparison,” he says. Instead, what the field needs now is more research into the types of areas that Drs. Goldsholl and Singer underscored.

“What are the employment models, rounding structure and staffing ratios that produce the highest quality care and result in the best outcomes?” Dr. Lindenauer asks. He and his research partners, he adds, plan to start with the same database to begin these studies.

Until that happens, Dr. Singer says that hospitalist groups can use the Lindenauer study to their benefit. Hospitalist groups “like Dr. Ardila’s “can take the data they collect on their performance and compare those results to the study’s, which will now be viewed as a de facto national average for hospital medicine.

That process, Dr. Singer explains, “should drive the informed hospital to pick better, more mature programs. This is very bullish for the best in the industry.”

WHEN A NEW ENGLAND JOURNAL OF MEDICINE study released late last year found that hospitalists reduced length of stay by 12% when compared to office-based internists and family physicians, many in the hospital medicine community were surprised that the number wasn’t higher. But lead author Peter Lindenauer, MD, MSc, says that he found an even bigger surprise in data about hospitalists’ effect on costs of care.

So why did family physicians perform as well in treatment costs? Dr. Lindenauer says one theory is that because hospitalists are unfamiliar with patients on admission, they may order more diagnostic tests than their family physician colleagues, who have a long-term relationship with patients.

Dr. Lindenauer says he was also surprised by another finding: Hospitalists delivered lower costs and reduced lengths of stay over even those general internists who had a high volume of inpatient cases.