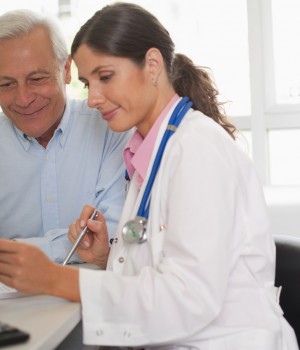 WHEN IT’S TIME TO SEND your elderly patients home, how often do you have all the information you need to put together a really complete discharge plan? Do you know whether your hip fracture patient must navigate stairs at home, for example, or how much help a patient with diabetes and Alzheimer’s will have taking his medications?

According to Param Dedhia, MD, a hospitalist at Johns Hopkins Bayview Medical Center in Baltimore, hospitalists need exactly that type of information when admitting or discharging patients. But while nurses and case managers regularly collect that kind of information for their databases, he says, physicians don’t usually see that data or use it in discharge planning.

The solution, Dr. Dedhia says, is to “geriatricize” the discharge process and better prepare elderly patients for the pitfalls that await them at home. As part of a demonstration project implemented at three hospitals, hospitalists reformatted how they discharge patients, incorporating many principles from geriatric medicine. (In addition to Johns Hopkins Bayview, Geisinger Medical Center in Danville, Pa., and Carolinas Medical Center-NorthEast in Concord, N.C., also took part.)

“When patients go home, they have no safety net,” Dr. Dedhia explains. “That’s why our discharge instructions have to be comprehensive and transparent, particularly for the elderly who are inherently more vulnerable.”

Here are some highlights of that re-designed discharge process.

A revised H&P form
Dr. Dedhia, an instructor of medicine at Johns Hopkins University who has completed a geriatrics fellowship, knew the intervention had to span the entire hospitalization.

“Discharge starts at the time of admission,” he says. But he also knew that the project had to be easily incorporated into the daily routines of the physicians, nurses and other staff members who would be using it. “If it wasn’t part of the work flow,” he says,” “it would be unrealistic and overwhelming for busy hospitalists.”

The centerpiece of the research project, which was known as Safe STEP (for Safe & Successful Transition of Elderly Patients), was a re-designed and expanded H&P form that hospitalists use to gather information. While the form collects all the usual data “past medical and medication history, a review of systems “it also prompts physicians to delve into social factors and geriatric syndromes that they typically don’t ask about.

The form asks, for instance, about patients’ living conditions and their level of independence. That information can give physicians clues to common syndromes of older patients, such as falls, polypharmacy and elder abuse. “For some, the form was very intense,” Dr. Dedhia admits, “but it allowed for a more complete workup.”

Fitting into workflow
Just how intense? While the hospitalists at Johns Hopkins Bayview typically use an eight-page H&P, the revised form used during research jumped to 11 pages, which Dr. Dedhia estimates took an additional 10 to 15 minutes to complete. Not surprisingly, he says he initially encountered some confusion and pushback from physicians. But after completing just a few H&Ps, many hospitalists acknowledged the benefits of collecting those data.

Hospitalists, not nurses, were supposed to fill out the H&P form, but that didn’t always happen. Hospitalists were sometimes unable to answer some questions, while others grumbled that they just didn’t have the time.

As researchers anticipated, nurses and case managers stepped in to complete some missed fields, but Dr. Dedhia says the revised H&P was still important. “If hospitalists have to look at that information, they are going to think about it,” he explains. “Even if they didn’t fill out everything, the information was on their minds.”

Researchers introduced a one-page “Fast Facts Fax” form that hospitalists or case managers filled out to notify primary care physicians that a patient of theirs had been admitted. The form included a brief statement of the presentation and listed hospitalists’ contact information.

The form was designed as a “release of patient information” form, allowing hospitalists to ask for a medication list, baseline labs and studies, and information on code status and advanced directives. Case managers were charged with tracking down the office-based physicians and faxing the form to them.

Each patient’s one-page worksheet asks for feedback from staff in eight different disciplines, from home care to nursing to physical and occupational therapy. Comments should list barriers to discharge, facilitators to make discharge go more smoothly and a plan of action to help patients make the transition home.

Dr. Dedhia gives a typical scenario that the form might help address: Ms. Smith broke her hip. One barrier to discharge might be the fact that her kitchen is downstairs but her bedroom and bathroom are both upstairs. The facilitator might be what’s known as a first-floor “set up,” while the plan of action would involve contacting providers who could make that set up happen.

He says this type of worksheet is important because so many providers care for a patient in the hospital. Asking all of those individuals to list concerns and suggestions on one sheet not only makes sure that everyone is heard, but does so relatively efficiently.

“Otherwise, someone would have to pour through the chart and try to figure out what everyone thinks needs to be done to send a patient home,” Dr. Dedhia explains. Plus, giving everyone a more or less equal voice in identifying concerns helps team morale and furthers partnership.

Pharmacists were asked to keep those factors in mind when reviewing medications and anticipating problems. They might question whether a medication was appropriately dosed, if there were interactions with other medications or foods, or if an agent like a sleep aid was intrinsically dangerous to the older patient.

The goals of this pharmacist “consult,” Dr. Dedhia says, was to raise appreciation for polypharmacy and promote a better medication list at discharge.

Discharge agreement
Finally, the project created another new document that calls for patients and physicians alike to review what transpired in the hospital and what to expect once the patient goes home. The form is reviewed at a formal “discharge appointment” that is coordinated by case managers.

“The form asks if patients know where they are going, if they have the name and number of who to contact if a problem occurs during the transfer, if they understand their medications and symptoms to watch for, and if they know to follow up with the primary care physician,” Dr. Dedhia says.

The form is split into two parts. On the left side is a series of statements that patients are asked to acknowledge. On the right are statements that physicians are asked to address, including that they agree to schedule a follow-up appointment with the patient’s outpatient physician, and discuss the admission illness and key tests with the patient and/or family members. Checkboxes next to each statement make it clear that patients and physicians are putting their consent into writing.

The form also gives patients contact information to call the hospitalists in case problems arise. And it spells out discharge instructions in large type that older patients can read.

Results
While researchers looked at a relatively small pool of patients “500 in all “Dr. Dedhia calls the project a success.

For one, the preliminary data show that the re-designed discharge process led to fewer re-admissions and follow-up visits to the ED.

And because the forms were created in distinct modules and a simple paper format, other hospitals can easily adapt all or part of the forms.

“We were trying to develop something that could be implemented and tested in any hospital,” Dr. Dedhia says. “We had to use the most common denominator, which is paper.”

As a testament to the project’s success, several other hospitals have already adopted parts, but not all, of the revised discharge process. Two sites, for instance, ultimately decided not to mandate adoption of the H&P form.

While Dr. Dedhia was initially surprised that other hospitals didn’t implement more aspects of the project, he understands that local culture must dictate the pace of change. “People know their systems locally and understand what the impact will be in their setting,” he says.