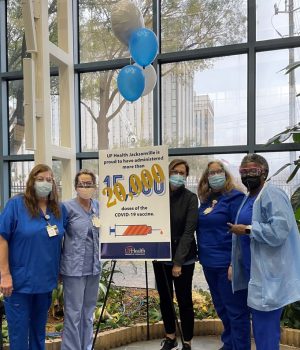 WHILE THE EFFORT to vaccinate Americans against covid has been chaotic for many, one health system in Florida has had a very different experience. And at least one hospitalist has been front and center in that effort.

Back in December, the University of Florida Health in Jacksonville (UFHJ) was one of five health systems in the state given the task of vaccinating its own employees as well as ensuring that surrounding hospitals and health systems had the infrastructure they needed to do the same. Within the first week of rolling out its vaccination program on Dec. 14, UFHJ was able to vaccinate more than 1,000 of its employees.

Just nine days later, the health system expanded those efforts to begin vaccinating patients, identifying those who were eligible from UF Health clinics and implementing an outreach campaign to schedule those patients for both doses. By early February, the health system had administered more than 20,000 doses, and 4,000-plus of its employees had received both shots. It also had the operational capacity to deliver 2,000 doses a day, assuming vaccine supply is available.

“As coordinators of care, hospitalists are uniquely positioned to participate in operational and logistical decisions.” 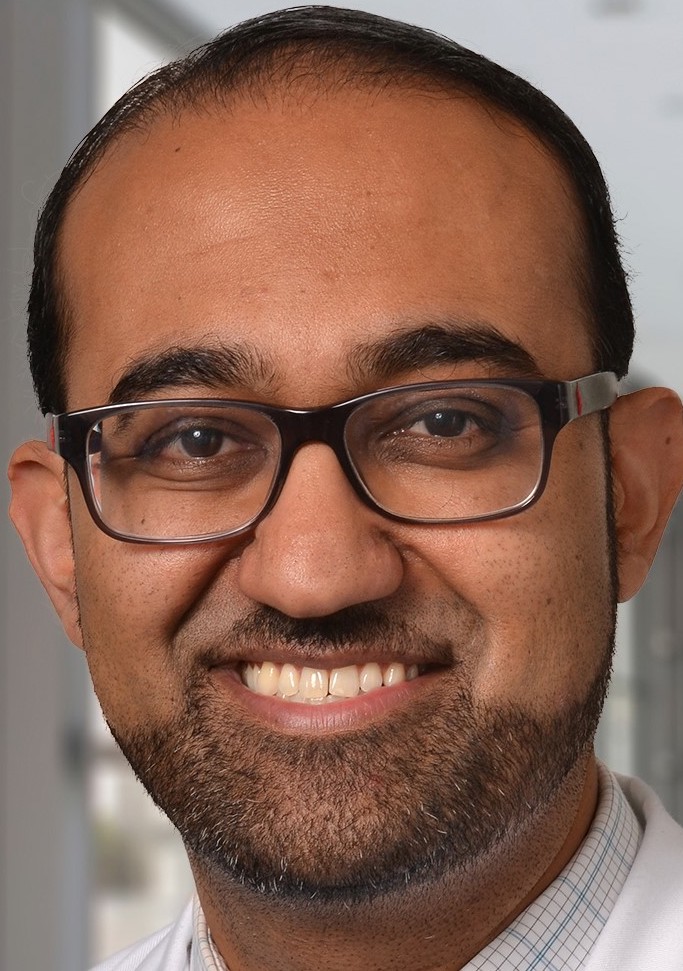 ~ Chirag R. Patel, DO
University of Florida Health in Jacksonville

Chirag R. Patel, DO, UFHJ’s assistant chief medical officer and chief hospitalist for the Sound Physicians’ hospitalist group there, says that while the vaccination program required a lot of planning, the health system didn’t encounter the problems that the media have highlighted in other parts of the country. As one of the lead clinicians in charge of his health system’s covid response, Dr. Patel works on clinical care guidelines, patient transitions of care, ambulatory management of discharged patients and overall vaccine rollout.

He acknowledges that on the surface, a vaccine administration effort might seem better suited for outpatient physicians. But he quickly adds that hospitalists are the right specialists to get involved as the nation struggles to deliver vaccine to its citizens.

“As coordinators of care,” Dr. Patel explains, “hospitalists are uniquely positioned to participate in operational and logistical decisions.” Plus, “hospitalists are natural educators because we deal with complex, acute issues that many patients have never heard of before.”

How it works
Under the state’s mandate, UF Health was tasked with stewarding the covid vaccine for the northeast region of Florida.

It started its vaccination campaign by targeting health care workers employed by the system, while at the same time verifying that surrounding hospitals and health systems had their own infrastructure and roll-out plans in order. Once verified, UF Health supplied Pfizer’s covid vaccine to those other hospitals and health systems and sent staff onsite for at least the first couple of days. The goal was to make sure those vaccination drives were running smoothly—and that vaccine supply remained accounted for.

As for the general population: After registering online, people could print out and sign consent forms to bring to the vaccination site. Once they arrived, Dr. Patel says, the process would typically take 30 minutes from start to finish through UFHJ. Other hospitals, he notes, had their own processes, and times may have varied.

Despite the problems some states have had in administering vaccine, Dr. Patel says the process has so far gone fairly smoothly. One reason for that success, he explains, is that the health system didn’t have to start from scratch. “We learned a lot of lessons from mass testing for covid,” he points out, “including the logistics needed to get through testing a large number of people.”

In some ways, Dr. Patel adds, vaccinating people is easier than testing them. “Instead of doing a swab which tends to cause quite a bit of discomfort, we’re injecting vaccine, and the discomfort is usually over in a pinch.”

Like elsewhere, UFHJ has found that vaccine supply—at least so far—can be sporadic. But importantly, “the infrastructure is in place, and personnel can be mobilized very quickly when supply is received.” Administering 2,000 doses per day takes a group of about 40 people including security, check-in/registration, supply runners, pharmacy staff, vaccinators, monitor station registration staff, reaction monitors and site supervisors.

Those personnel, says Dr. Patel, are a mix of volunteers and employees who are redeployed to the vaccination clinic.

Minimal worrisome reactions
According to Dr. Patel, he and his UFHJ colleagues have seen minimal severe reactions. “We’ve seen mild reactions consistent with reactions to the influenza vaccine,” he notes. “More severe reactions have been fatigue, headache, and occasional low-grade fevers or rash. The most significant immediate reaction was shortness of breath, which resolved quickly and did not require hospitalization.”

For any patients with serious reactions, UFHJ took some basic precautions, including keeping emergency-trained nurses and physicians onsite in case immediate action is needed. People in higher-risk categories are given a wristband so they can be easily identified. And after getting the vaccine, patients go to a holding area, where they wait for 15 to 30 minutes.

“If you’re in a low-risk category,” Dr. Patel says, “we monitor you for 15 minutes as mandated by the CDC.” For those who fall into the moderate- to severe-risk category for a vaccine reaction, “you wait for 30 minutes.” The latter group spends a total of about 45 minutes, not 30, in the vaccine clinic.

Overcoming vaccine resistance
Another potential obstacle: the anti-vaccination sentiment among some in the public. Dr. Patel says that people are wondering how this vaccine could be created safely when done so quickly, and they’re afraid that corners were cut in the R&D process. People also worry that there’s not enough known about the vaccines’ short- and long-term effects.

Given that apprehension and the speed with which the vaccines were developed, hospitalists have been integral as educators. Dr. Patel says that process begins with the willingness of the health system’s physicians to step up and be vaccinated themselves.

While UFHJ clinicians don’t have to get the vaccine, “physicians have overwhelmingly showed up to get vaccinated,” he explains. “It shows great leadership on their part, and it demonstrates that we have looked at the science and trust it.”

Dr. Patel urges hospitalists to embrace their authority and combat skepticism about the vaccine through education. “Don’t worry about staying in your lane,” he says.

Besides, he adds, hospitalists are going to find themselves in situations where they have to speak up. “We’re going to come to a point where we have patients who have been in the hospital for an extended period of time who need to get vaccinated,” he points out. “We’re going to have to make frontline decisions on which patients are prioritized. When that time comes, hospitalists need to make sure they have a seat at the table to decide which vulnerable patients under their watch get vaccinated.”

Edward Doyle is Editor and Publisher of Today’s Hospitalist.

May the doctors be healthy so they can help the world overcome this pandemic.