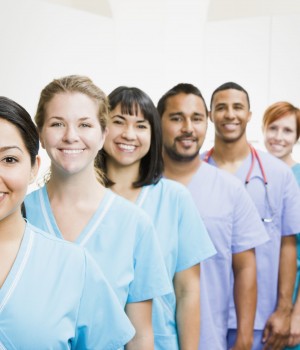 Published in the November 2008 issue of Today’s Hospitalist

Since the birth of hospital medicine, hospitalist programs have struggled to both recruit and retain physicians. If data from the Today’s Hospitalist Compensation & Career Survey are any indicator, the specialty can expect both issues to remain volatile in the foreseeable future.

The hospitalists who responded to our survey painted a picture of a physician workforce that plans to remain in hospital medicine for more than a decade, but stay in its current job for a significantly shorter period of time.

On one hand, that volatility makes program directors and recruiters nervous about the stability of their groups and of the specialty as a whole. On the other, directors say that the carrots being used to recruit and retain hospitalists “high salaries and handsome incentives “could eventually pull more physicians into the field and relieve some of the strain on hospitalist supply and demand.

The simplest way to measure hospitalist retention is to take the survey’s average group size “8.74 FTE physicians “and compare it to the number of doctors who left those groups in the previous year, which is 1.5 physicians. (The study was conducted in May 2008.) That translates into an annual turnover rate of just over 17%.

That rate varied slightly by specialty. For internists working as hospitalists, it came to 16.95%, while it was 23.14% for pediatric hospitalists.

Sort the data by employer type, however, and different retention patterns emerge. National hospitalist management groups were hit hardest, with hospitalists in those groups reporting an attrition rate over the previous year of nearly 22%. Local hospitalist groups fared significantly better with about 13% attrition, while hospitals/hospital corporations lost just over 16% of their workforce.

Long-term career, short-term job
Where are these hospitalists going? One possible answer can be found in the answers to two other survey questions.

First, when hospitalists were asked how many years they planned to remain in the specialty, the mean response was 11.63 years. That number was slightly lower for internists working as hospitalists (11.46 years) and slightly higher for pediatric hospitalists (13.94 years). It also varied considerably by employer type.

For instance, consider the number of respondents who said they plan to leave the specialty in the next two years: 8.9%. That figure can probably be attributed to “tweeners” who are working in hospital medicine on their way to a fellowship. However, it pales in comparison to the number of hospitalists who claimed they plan to leave their current job in the next two years: 26.4%.

“If these data are true,” he says, “almost 25% of our workforce is going to be leaving its current workplace within two years. If you have a 10-physician group, that means you’re losing two to three doctors a year.”

Hospitalists as free agents
Dr. Ford says he thinks those data point to a migratory mindset among at least some hospitalists.

“Physicians want to work as a hospitalist,” he explains, “but those data tell me that there are doctors who want to get one or two years of experience in a group, then become a free agent. They’ll go down the street and say, ‘I’m a hospitalist with two years of experience, so I want a salary of $249,000 and a $25,000 signing bonus because there’s no one else out there like me.’ ”

There may be additional explanations. Deborah Puckhaber, MD, director of the hospitalist program at Kingman Regional Medical Center in Kingman, Ariz., for instance, says that hospitalists are looking for more control over their professional life.

“It has to do with whether you feel you have some voice or input in your program,” Dr. Puckhaber explains. “A common complaint is that hospitalist programs are considering important issues where the hospitalists feel they can make a positive change, but administrators don’t listen to their opinion.”

But others say there are more tangible reasons that hospitalists are leaving, including factors like schedules, workload and call. Dan Fuller, president and cofounder of In Compass Health Inc., a national hospitalist company based in Alpharetta, Ga., says that concerns about work hours and patient volumes drive many hospitalist employment decisions.

“People are leaving because of money or long shifts,” he says, “We struggle to recruit physicians who will work in the hospital for 12 hours, then take call.”

The problem of rising salaries
Whatever the reasons that hospitalists are looking to switch jobs, some say that the hypercompetitive recruiting environment and skyrocketing salaries are only stoking the fire. With so many big compensation figures being thrown around, hospitalists may have a problem keeping a level head as they navigate the job offers they receive or the ads they see.

Mr. Fuller says that it’s often difficult for hospitalists to get a handle on the market, and that rapidly rising hospitalist salaries are only complicating matters.

Mr. Fuller says that some hospitalists see a salary figure and don’t do their homework to find out what’s behind the big paycheck. “They focus on the fact that they’ll make $200,000 with you and $275,000 somewhere else. We’ve had physicians leave us and come back.”

Apurv Gupta, MD, medical director of the hospitalist service at Caritas Norwood Hospital, which is located outside of Boston, notes that residents just out of training tend to be more driven by salary. “If you offer them $206,000 instead of $195,000, they jump. It’s only after they’ve been working for a while that they realize that the extra money isn’t worth what they’re putting into the job. That’s when they start thinking about overall longevity.”

Mr. Burns, who is vice president of physician services at Sound Inpatient Physicians in Tacoma, Wash., says that one practice his company competes with not only pays a higher salary, but it gives its physicians two weeks of paid time off. At the same time, however, the competing practice works longer hours and sees more patients. These differences are not always obvious or emphasized to interviewing physicians.

While Sound’s hospitalists have daily patient loads between 12 and 15, a number Mr. Burns admits is not set in stone, the competing group pushes encounters to 17 per day. And while physicians at that group work 11 hours a day for the first five days of a seven-day block, they work 14 hours for their last two shifts “all in-house.

For some physicians, Mr. Burns says, seeing more patients and working more hours for a bigger paycheck may be a good tradeoff. But he finds when speaking with hospitalist candidates that they don’t always appreciate those differences during the search process.

The silver lining
Despite the retention problems that survey data reveal, many in the industry remain relatively optimistic. Mr. Fuller, for example, says he’s encouraged that 45% of hospitalists said they’re planning to stay in their jobs for six or more years.

And Dr. Gupta was surprised that so many hospitalists say they’re planning to stay at their job for nine years. “I try to get a two-year commitment. People have a tough time with that, and not just young people.” Why? “I think it has to do with not knowing exactly what kind of program they are getting into. Once they are working with our team, we have noted that these same individuals often have great longevity.”

Others think that the rising salaries that tempt so many and in turn to keep the turnover rate high could eventually help stabilize the specialty.