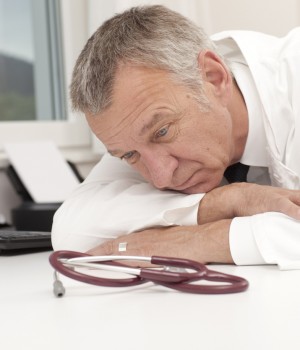 IT WAS ONE OF THE BIGGEST THREATS to hospital medicine 10 years ago, and there are signs that it may be even more pervasive now. While burnout among physicians is nothing new, it has been a constant problem in hospital medicine since the specialty began. The mismatch between supply and demand means that many physicians working in the field are working harder and burning out faster.

But some doctors push back on the notion that burnout is simply inevitable in such a stress-filled field. “A lot of programs have this type of learned helplessness where they accept burnout as a given, and I think that’s false,” says Brian W. Kendall, MD, medical director of hospitalist services for Regional Medical Center of Orangeburg and Calhoun Counties in Orangeburg, S.C. While he sees the threat of burnout as constant, “I think it’s something that can be mitigated if hospitalist leadership is proactive and has the support it needs from the C-suite.”

Then again, there’s something about pulling long blocks of shifts that makes burnout hard to avoid.

In the wake of new duty-hour rules protecting residents’ time during training, Dr. Barthel says she expected to see newly-trained doctors burning out fast once they started to practice. But that hasn’t been the case.

“The new people have tons of energy and no issues at all seeing a high volume of patients,” says Dr. Barthel. “But I can’t say the same for people I know who have been doing this for several years.”

Here’s a look at the lessons that both Drs. Kendall and Barthel have learned on how to mitigate burnout.

Dropping call
Eleven years ago, when Dr. Kendall first started with Regional Medical Center, group members “and there were only four of them “were on call every fourth night and worked every other weekend.

“We basically worked 12 out of 14 days for most of the year,” Dr. Kendall recalls. That was OK when they first started the program and had a census of only six or eight patients. “But we grew very quickly,” he adds, “and the situation became untenable.” In fact, two out of the four hospitalists quit by the end of the first year, including the program director.

In response, “We basically redesigned the program from the ground up to make it more acceptable from the standpoint of physician lifestyle,” Dr. Kendall says. The first step he and the administration took to turn burnout around was to ditch the previous call-based schedule and move to shifts.

“No matter how hard their day might be, doctors working shifts know that it’s finite,” Dr. Kendall says. “They know they can go home with the pager turned off and not have to worry about patient care until the following day.”

A schedule redesign
But the type of shift can make a huge difference. For Dr. Barthel, the seven-on/seven-off block of 12-hour shifts she and her colleagues currently work is the biggest burnout factor they face. She sees it as a major reason why veteran hospitalists face a greater risk of burning out than doctors just out of residency.

“The 12-hour shifts get to be really draining,” she notes. As the parent of school-age children, she’s leading the charge in her program to renegotiate her group’s contract to go to an hourly wage. That will allow some group members each day to choose to work an eight-hour shift while another hospitalist holds down a traditional 12-hour one. (A nurse practitioner will provide coverage for the other four hours each day when a hospitalist won’t be on.)

“Instead of 15 shifts per month, those of us working eight-hour shifts would have to do 22,” Dr. Barthel explains. “So we’d work the same number of hours, but we would spread those hours out more. That way, I feel we would have much more personal bandwidth.”

Dr. Kendall’s group likewise opts for shorter days and flexible schedules, steering clear of seven-on/seven-off and 12-hour shifts “a combination that he feels just makes physicians depressed. Maintaining a flexible schedule also allows physicians in his group to match their work hours to their personal interests.

One physician, for instance, doesn’t mind working weekend days as long as he doesn’t have to pull swing shifts during the week when the rock band he’s in practices.

“Several factors contribute significantly to burnout,” Dr. Kendall notes. “One is not having enough time to have an enjoyable life outside of medicine.”

Fast-track recruiting
Another big burnout factor is unpredictability. “Hospitalists are definitely more stressed if they don’t know clinically what’s around the corner,” Dr. Kendall says. Having to round on 15 or 16 patients while knowing you may be hit with a handful of admissions “is very, very stressful.”

The solution his group chose is giving only one of the five daily rounders the admission pager from 7 a.m. to 1 p.m. That physician is assigned a lower census to accommodate admissions.

Of course, building in predictability won’t get you far if doctors are stretched too thin. Dr. Kendall recalls one year after the program was redesigned that the group’s census rose 40%, leaving each doctor seeing as many as 25 patients a day. At the end of that year, four physicians left.

“You’re going to lose doctors if you don’t aggressively recruit to stay ahead of the growth curve,” he notes. “If your recruitment process is long and drawn out, you’ll never catch up to where your staffing needs to be, and more doctors will just leave.”

That’s why he built this condition into his taking on program directorship: the authority to hire (and fire).

“Every time we wanted to hire someone new, we had to put on a dog and pony show for the administration and get permission,” Dr. Kendall notes. “Eliminating that layer of bureaucracy enabled us to keep up with growth.”

Having the authority to hire physicians without having every member of the administration sign off on candidates has shaved at least six months off the group’s recruitment time. And being able to staff up more quickly goes a long way toward making sure the physicians already working don’t become frantic.

The need for caps
When the group was much smaller, however, Dr. Kendall built in one other piece of burnout protection: setting caps.

Now the group is big enough to not need such backup. That’s fortunate, Dr. Kendall notes, because very few private physicians continue to take call at the hospital.

“It was controversial within the hospital politically, so I was happy when it went away, but it definitely served its purpose,” he explains. “That layer of protection was critical to keep existing hospitalists here.”

Dr. Barthel agrees that being able to draw on reserve physicians helps protect group members already on board. She points to the advantage of working for a national management group, with Cogent sending what it calls a “traveling physician” to her group at Blessing, starting next month.

“We’re losing one physician, partly because he wants to teach but also because he’s tired of working seven-on/seven-off,” Dr. Barthel says. “The traveling physician could be here six months until we fill that slot.”

A line in the sand
Dr. Barthel says that the one downside to working as a traveling physician or a locum is that “little bit of skepticism when physicians first arrive. There’s some hesitancy to really accept them.” Overall, however, Dr. Barthel says that she and her colleagues are very well received within the medical staff.

That’s important, Dr. Kendall notes, because he sees not being treated well on the job as a major factor in hospitalist burnout. That’s why, as another condition for heading up the program, he negotiated having the freedom to choose whom the group admits for.

“How hospitalists are treated by specialists is an extremely sensitive and important issue,” Dr. Kendall notes. “When hospitalists feel they’re being treated like housestaff, they become very demoralized.”

He has, he points out, been “very firm about not admitting routine surgical patients.” Why? “That’s out of our scope of practice,” he explains, “and that’s an area in particular where our hospitalists tend to feel less valued. It is one of the few lines in the sand that I have drawn in terms of leadership and the management of our practice.”

Finding your bliss
As for how he personally avoids burning out, Dr. Kendall points to hospital medicine’s ability to “change every week with a new opportunity.” In addition to heading up the hospitalist group, he also directs case management and is looking forward to helping with the hospital’s latest venture: a metabolic center.

Giving hospitalists opportunities to pursue their particular interests “critical care, pharmacy and therapeutics, teaching, research “is another big way to help doctors avoid stress. Dr. Barthel says that her passion is quality improvement, and she looks forward to negotiating more time to pursue it.

Right now, her job is about one-quarter administrative vs. 75% clinical, but she’d like a 50-50 split. “I enjoy patient care,” she says, “but there’s rarely a day when I can come in, see patients, get my administrative issues taken care of, and be able to go home and be in a good mood with my family.”

The problem, Dr. Barthel adds, “is these hectic, busy days when you’re on for 12 hours and you’re running the whole time. I need fewer of those to be able to continue doing this.”