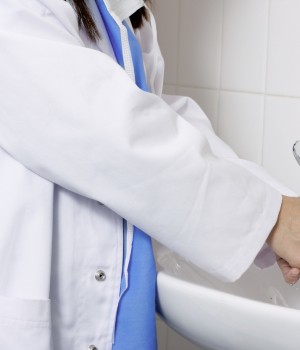 Published in the June 2012 issue of Today’s Hospitalist

WHILE NO ONE DISPUTES the importance of handwashing to avoid spreading infections in the hospital, time constraints and misconceptions about proper hand-hygiene techniques often result in dismal “and potentially deadly “rates of compliance. But one ICU found that high-tech scrutiny, as well as some fairly ruthless public feedback on how well clinicians were doing, dramatically increased handwashing compliance.

For the past three years, North Shore University Hospital in Manhasset, N.Y., has videotaped and publicly reported how often staff wash their hands every time they enter and leave rooms in the ICU. Since the initiative was rolled out in 2008, compliance with handwashing guidelines has skyrocketed more than 70%.

The project not only taps into the competitiveness of many health care providers, but the fact that they don’t want to be publicly embarrassed. “People’s behavior changes when they’re being watched,” says Bruce Farber, MD, professor of medicine and chief of the division of infectious diseases at North Shore University Hospital and Long Island Jewish Medical Center.

A first in health care
Dr. Farber, lead author of a study on the project that appeared in the Nov. 22, 2011, issue of Clinical Infectious Diseases, says that the concept of videotaping worker behavior has a long history in fields like traffic control, security and food services. “But this was the first time video monitoring technology had been used in any kind of systematic way in the hospital,” he explains.

Researchers installed video cameras in a 17-bed ICU and tracked staff compliance over two years. Researchers positioned cameras on every sink and hand-sanitizer dispenser. They also installed doorway sensors to identify when staff entered or exited each ICU room. Researchers spent about $50,000 on cameras and other hardware to wire the ICU.

The hospital also eventually installed monitors in the hallway of the ICU that displayed real-time statistics about how well staff members were meeting hand-hygiene protocols.

Outside video auditors , at a cost of about $1,000 per month, observed staff as they entered and left patient rooms. After reviewing 20-second video clips, auditors documented hand-hygiene compliance and assigned a pass or fail to each encounter. Auditors determined only whether staff washed their hands, not how well they washed up.

Each health care worker was required to wash his or her hands before entering and after leaving patient rooms, after touching objects in the patient’s environment, and after removing his or her gloves.

Going public
While clinical personnel at the hospital sign employment contracts stating that they’ll follow proper handwashing techniques, researchers gave them additional training on handwashing protocols and told them that surveillance cameras were being installed as part of a clinical study. But Dr. Farber says that the cameras alone didn’t change clinicians’ behavior. As proof, he points out that during the study’s initial 16-week monitoring period, when feedback was shared only with supervisors, hand-hygiene compliance hovered at only around 10%.

It wasn’t until researchers put monitors in the hallways of the ICU that compliance rates jumped to 81%. Every 10 minutes, those monitors display updated data showing compliance by patient room, shift and provider type, with aggregate data for the current shift and the weekly and monthly rates. In addition, monitors list the numbers of those rooms that have more than 90% compliance.

While administrative staff receive weekly e-mails on compliance trends, Dr. Farber says displaying those data on monitors in the hallway is the real key to improving compliance. “E-mails tend to get forgotten,” he notes. “Signs right in your face get the most attention.”

Definitions and misconceptions
In addition to improving compliance, the study uncovered other issues. For instance, the initial 10% compliance rate found through video audits was far lower than the 60% rate recorded by independent observers at the hospital before the study began.

Dr. Farber says the discrepancy is likely due to “significant differences in the definition of handwashing.” The independent observers, he explains, took a much more lenient view of acceptable handwashing techniques. The video auditors, by comparison, looked for strict adherence to specific criteria, such as washing hands within 10 seconds of entering or exiting an ICU room.

The study also found that some doctors and nurses have misconceptions about when handwashing was required. “Some people are under the misguided belief that they don’t have to wash their hands if they wear gloves,” he points out. “This is a common error.” But the biggest barrier to hand-hygiene compliance was time. “There are so many priorities, particularly on the nursing staff,” says Dr. Farber. “People just get busy.”

For auditing purposes, North Shore Hospital divided clinicians into two categories: “attending doctors” and “other health care professionals,” which included nurses, aides, housestaff, and other clinicians wearing any type of scrub or uniform. The results from each group were reported in aggregate so individual chronic offenders weren’t singled out.

But Dr. Farber notes that because the cameras monitored specific rooms, auditors could have easily tracked compliance by individual. “We have the ability to see the person in the videos,” he says.

A sound investment
Researchers also found that unit leaders played an important role in improving compliance. “They took action to motivate the staff,” according to Dr. Farber. “The supervisors would encourage people to ‘have a better shift.’ Ultimately, they are responsible for the unit and this is a measurement that they were being judged on, so the leaders were on the staff to bring in high numbers.”

As health care reimbursement transitions into value-based purchasing, technology that can monitor behaviors and feed back information to staff may prove to be cost effective, Dr. Farber says.

“We believe the feedback on the hallway monitors was necessary for a sustained effect,” he explains, “and that ongoing monitoring and feedback is required to maintain high rates of hand hygiene compliance.”

Today, cameras continue to track (and auditors continue to rate) handwashing compliance in North Shore’s medical ICU. The program has also been rolled out to the surgical ICU, which had much better hand-hygiene compliance from the start, something Dr. Farber sees as a halo effect of his work in the medical ICU.

The video treatment has been so successful, in fact, that hospital administrators are looking at ways the technology could be used in other areas of the hospital, such as to analyze proper technique during resuscitation, rapid responses, central-line catheter placement and isolation procedures.

Ingrid Palmer is a freelance health care writer based in Evergreen, Colo.