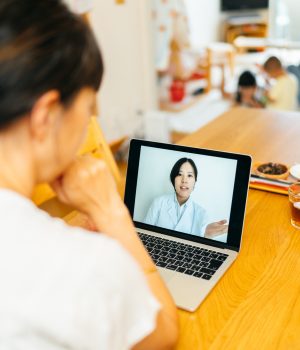 AN INTEGRATED SYSTEM and a safety-net hospital, Denver Health had no track record with hospital at home before the pandemic. What it did have was a lot of experience trying to improve transitions in and out of the hospital for high-risk patients.

Several primary care physicians within Denver Health, for instance, had launched a post-discharge clinic for recently discharged patients who need close follow-up and a connection to primary care.

And “we had been doing what I call ‘complex care’ for almost a decade,” says Jeremy Long, MD, MPH, one of those PCPs, who serves as the medical director of the intensive outpatient clinic.

“We’ve been using enhanced care teams and care navigators to make sure high-risk patients being discharged from the hospital or even the ED are successfully handed off.” That existing infrastructure and expertise made it possible, Dr. Long adds, “to flip a couple of switches” and launch a virtual hospital at home program for high-risk covid patients, beginning the first week of April.

“There were a lot of eyes on these patients.” 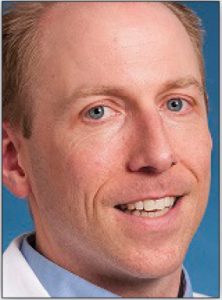 The program is still going strong, reports Patrick Ryan, MD, MPH, the virtual hospital at home program director. “Our numbers have gone up and down over the course of the summer, reaching a daily-census peak of 40 patients and dropping down to as low as four,” says Dr. Ryan. “But we’ve treated more than 400 patients.”

Targeting patients with risk factors
The program was initially intended to help relieve the hospital if it became overwhelmed with covid patients. But its focus quickly changed.

“We learned early on that patients didn’t necessarily present to the hospital at a time when they were fully decompensated,” Dr. Ryan explains. While patients were coming to the ED with mild symptoms including cough or fever, they weren’t experiencing shortness of breath or drops in their oxygen saturation.

“But a few days later, they did experience those and they needed a higher level of care, either being re-evaluated in the ED or even hospitalized,” he says. “We changed our approach to try and identify those patients earlier in their decompensation by monitoring them at home.”

As he and his colleagues described in a letter to the editor  published online in August by Infection Control & Hospital Epidemiology, patients were eligible for the program if they had suspected or confirmed covid and at least one risk factor for disease complications, but they did not meet admission criteria.

“Patients didn’t necessarily present to the hospital at a time when they were fully decompensated.” 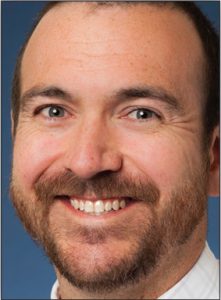 According to findings reported in that letter, patients in the program were monitored at home for a median of four days— and only 13% ended up needing to have their care escalated. More than one-third of those patients (35.4%) were admitted.

All communication with the care team is via phone. And all patient data (pulse, temperature, blood pressure and oxygen saturation) are self-reported.

Those data points are reported during at least two daily phone calls, one in the morning with a physician or advanced practice provider and one in the afternoon with an RN. According to Dr. Ryan, the program’s success hinged on what he calls those “frequent touches.”

“Two calls a day were our standard number of outreaches,” he says. “But some patients definitely did require more.”

Dr. Long adds that a great feature of the program was the fact that the entire team would hone in on the details disclosed in each communication. “There were a lot of eyes on these patients,” he says. “We were all risk-stratifying them on almost a constant basis so we would know who we were the most worried about and who we could just stay the course on.”

Staffing challenges
The biggest struggle in getting and keeping the program off the ground came in figuring out how to staff and how to work the phone calls into existing workflow.

A rotation of residents in April pitched in and was a big help. Dr. Ryan also credits a core group of “between five and eight outpatient nurses who have dedicated a lot of time to the program.” As for the attendings making calls in the morning, “these are all general internal medicine physicians who do primary care, sometimes coming to the clinic to make calls during their administrative time.”

At the same time, he and his colleagues needed to make sure that participating providers weren’t sacrificing all their administrative time. “We definitely don’t want to burn them out,” Dr. Ryan says. “They also need to preserve enough primary care access for patients to get the routine care they need.”

Connecting patients in the program to primary care has been a major benefit. When they entered the program, almost one in four patients—23%—didn’t have a primary care physician.

Guarding against burnout
Another challenge: Outpatient physicians had to learn when to refer patients to the program. “Initially, they were unsure of what to do with any covid diagnosis,” Dr. Long says. The study found that 34% of program referrals came from the ED, while 16% were from the hospitalist service.

As for tweaks they’ve made over the months, Dr. Ryan says one helpful change was switching to a big group chat available to everyone on the team vs. just using the EHR’s chat function to reach out to an RN about a patient, say, and then to a clerical person.

“That allowed everyone to be on board and up to date with patients. It’s been helpful to make sure any message is being clearly distributed to everyone.”

And the program couldn’t be sustained, of course, without reimbursement.

“Our Colorado Medicaid partner, at least currently, will reimburse the same for a telemedicine visit as for a face-to-face one, and that has been incredibly helpful,” says Dr. Long. “We’ll see what happens in the next fiscal year.”

Medicare Advantage plans pay less. “Sometimes, much lower,” says Dr. Long. “It really depends on the plan.” The program has been successful enough that Dr. Ryan is now in early discussions to expand hospital at home beyond covid patients and to target those with heart failure and diabetes.

“Those plans are in the very initial phases,” he says. “But moving forward, we’ll focus on trying to lower those patients’ length of stay and to decrease readmissions.”

Published in the October/November 2020 issue of Today’s Hospitalist