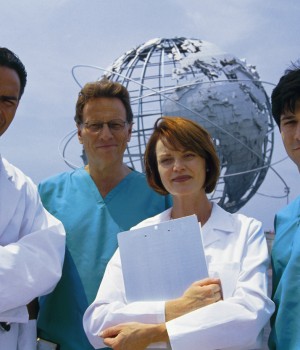 International medical graduates (IMGs) have for many years helped round out staffing needs for specialties like internal medicine, and by extension hospital medicine. In a health care system starved for physicians, all signs indicate that IMGs will continue to play a critical role. Yet hospital medicine now has to contend with shifting trends in immigration and visa issues.

According to data from the 2008 Today’s Hospitalist Compensation & Career Survey, 32% of practicing hospitalists are IMGs. While some of those physicians are already U.S. citizens, IMGs typically come to work in the U.S. via one of two paths. The most popular is the H-1B or employer-sponsored visa, which doctors traditionally use as a springboard to apply for permanent residency. J-1 visa waivers for physicians who trained in the U.S. are another option, but they’re much less popular because physicians need to spend three years working in underserved areas before they can apply for permanent residency.

On the plus side for hospital medicine, J-1 visa waiver positions specifically for hospitalists are now becoming available. At the same time, a tightening national immigration climate is causing more physicians to abandon the increasingly long, drawn-out process of seeking citizenship in favor of a more hospitable welcome in other countries. That’s bad news for a field in which the demand for hospitalists sorely outstrips supply.

Q: Who is trying to secure visas for hospitalists, individual physicians or the organizations that need them?

A: While I used to work more with individual physicians, I’ve recently been doing more work for groups that are looking to recruit hospitalists. It appears that groups are beginning to understand the value of IMGs and are focusing more recruitment efforts in that direction. In the last six months, for instance, several groups have come to me with candidates already in mind.

In part, that’s because hospitalist slots have become available in the last five years through Conrad 30 programs, which allow states to recruit physicians with J-1 visas to work in underserved areas. I’ve had a number of cases in Louisiana, for example, that were explicitly hospitalist positions.

A: It’s not exclusively rural areas offering J-1 waivers. Urban facilities can have an underserved designation, depending on the ratio of providers to the population. In a major metropolitan area like Detroit, there are a number of underserved areas.

Q: In the past, there was more demand for J-1 visa waivers than positions. Is that still the case?

A: In the last three or four years, we’ve seen a trend toward decreasing applications. A few states historically staffed all their positions on the very first day that applications were open, but that is no longer the case.

Only Florida and Texas are filling their J-1 positions early in the season. Many states have positions on a rolling basis, and there may be openings available as late as January or February. The competition level has actually decreased for those slots.

Q: Because physicians with H- 1B visas don’t face any geographical restrictions, can hospitalists with H-1Bs apply to any job they like?

A: Yes, but they have a maximum of six years of available time on their visa. So physicians who have already spent three years training need to look to applying for their green card right away. They’re running out of time in that non-immigrant visa status “and the process of applying for a green card is taking much longer.

Q: How long does that process now take?

A: For more people, we’re talking about a one- to two-year period. However, Indian and Chinese nationals “which include a lot of physicians “are over-subscribed in terms of green card numbers.

There’s also a certain level of frustration among the Indian community. Not only is there a long waiting period, but there have been some instances of problematic interpretations of their medical degrees. In a couple of cases, the immigration service has taken the unusual position that a MBDS degree is not the equivalent of an MD.

It’s not an official policy, but it’s adding to the frustration. You have a difficult economy in a tough labor market. I think for political reasons, the labor department “and perhaps the immigration service “is taking a tougher stance on employment- based petitions because of the interest they have in protecting American jobs.

Q: What if you already have a job with a H-1B visa? Do you have enough time to change jobs?

A: You’re free to transfer, but it may not be practical because of the waiting periods involved. Depending on how much time you’ve already used up on their visa, hopping from employer to employer is just not strategically sound. You’re going to run out of time.

Q: Are there instances of physicians running out of time?

A: What I see more of, unfortunately, is physicians with H1-Bs who opt out of the permanent residency process because it’s not worth the wait or the stress. It’s the first time in 10 years that I’ve seen that.

Physicians are either going back to their home country or to another country such as Canada, the UK or Australia, which are all making things easier for advanced degree professionals. We’re not really rolling out the welcome mat in quite the way that we should, so other countries are taking a lot of good candidates.