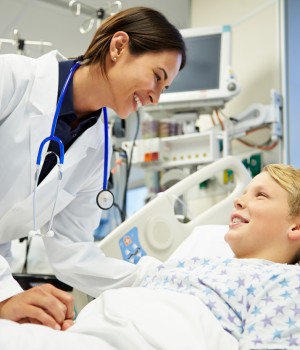 Somewhere between the emergency department observation unit and the medicine wards of most hospitals, there’s a group of patients who aren’t a perfect fit for either setting. These individuals may be a little too sick to go home in 23 hours, but they’re not so complicated that they warrant prime-time admission for a four-day stay.

To address these “gray-zone” patients “individuals who end up staying in the hospital for less than 72 hours “the hospitalists at Northwestern Memorial Hospital in Chicago came up with a novel solution: a short-stay unit. According to Matthew Landler, MD, the unit’s medical director, the goal was not only to provide better care for these patients, but to improve throughput in the ED and the wards.

In most facilities, these patients end up in ED-managed observation units. That’s not always ideal, though, because as soon as patients develop issues that fall outside the scope of ED physicians, the hospitalists are called in to consult. “If something goes outside of what’s expected, like a borderline stress test,” says Dr. Landler, “they end up calling us anyway.”

“Sometimes people fail when they open a new unit because they’re a little too selective.”

Northwestern, which is running close to capacity much of the time, had created an observation unit to reduce ED congestion. But administrators were looking for another strategy to wring more throughput out of the system. That’s when they decided that a short-stay unit might not only free up beds in the observation unit, but in the medicine unit as well. No shortage of patients

Research showed that there was no shortage of patients who would qualify for such a unit, Dr. Landler points out. Of the roughly 21,000 patients discharged from Northwestern Memorial between September 2006 and May 2007, more than half had a length of stay (LOS) of 72 hours or less. Of those, about half were general medicine patients.

In January 2008, Northwestern opened the 30- bed short stay unit. Dr. Landler explains that the unit is ideal for patients with conditions like uncomplicated chest pain or atrial fibrillation, a straightforward pneumonia, a moderate asthma or COPD exacerbation. Patients who have few, if any, comorbidities are also a good fit.

While Northwestern’s hospitalist group has almost 50 physicians, the short-stay unit is staffed during the day by two hospitalists working 10- to 12-hour shifts, as well as two patient care coordinators and a nurse practitioner. Overall, the unit draws from a pool of eight hospitalists who are dedicated to the unit. The group’s nocturnists cover nights with help from hospitalists who work evening shifts to handle admissions.

A typical day in the unit starts for hospitalists at 7 a.m. They hold multidisciplinary rounds at 10:30 a.m., reviewing the day’s workload with patient care coordinators, case managers and social workers. Hospitalists begin discharging patients early in the morning as they prepare for the next wave of patients.

The unit’s hospitalists were chosen in part for their interest in working with less acute patients and in working closely with nursing staff and social workers. But Dr. Landler adds that he also looked for hospitalists with good LOS data. “They had to show,” he says, “that they were efficient doctors who had a good handle on throughput.” Dr. Landler also notes that it did not take a hard sell to interest hospitalists in working on the unit. “There was,” he says, “more interest than there were available spaces.”

Liberal admission criteria
While observation units tend to use fairly tight admission criteria, Northwestern’s short-stay unit accepts a range of 13 diagnoses. The list includes the usual suspects and some not-so-common ones, like uncontrolled diabetes, moderate cellulitis, hypertensive urgency and diarrhea/constipation.

Dr. Landler says the unit decided to accept a wide range of diagnoses so it could handily fill the 30 beds. “Sometimes people fail when they open a new unit because they’re a little too selective. The hospital then says, ‘You’re supposed to be opening beds for us, so if you’re sitting on empty ones because you only take three diagnoses, there’s no point.’ ”

The unit doesn’t accept patients who have already been admitted to other units in the hospital; exceptions include patients from the ED and those who have undergone procedures like interventional radiology and GI. The unit also does not allow external transfers or direct admissions from clinician offices.

Dr. Landler acknowledges that because these patients often show up with no advance testing, they can be a bit of a mystery to the hospitalists. “Sometimes you get surprises, like patients who are misidentified as ‘short stay’ but who end up taking a lot of time and have to be transferred to a different unit or level of care,” he says. “One or two of those can put the whole unit behind.”

Getting the message to the ED
While the premise of a short-stay unit is fairly simple, Dr. Landler says that it took a while for the ED physicians to understand exactly which patients were good candidates.

“We knew that we were looking at a big pool of patients,” he explains. “The issue early on was whether we could identify them on the front end as they come through the ED.”

Hospitalists had to “reset the ED docs’ barometer,” for instance, on which pneumonia patients were appropriate for short stay. While a previously healthy patient with low-severity pneumonia should be in the unit, he says, the pneumonia patient with a malignancy discharged from the hospital a week earlier should not.

In the end, Dr. Landler recalls, the hospitalists “got everyone on track” by persuading ED doctors to think in terms of “less sick” rather than about the primary diagnosis itself.

A drop in LOS
By all accounts, the unit has been a success. Average length of stay dropped 13% across all medicine units initially “and has remained there “from an average of 5.46 days to 4.75. More impressively, the short-stay unit reduced ED observation volume by up to 60% in the first seven months of operation.

While the unit hasn’t met its objective of discharging patients on average by 1 p.m., Dr. Landler figures that the current 2 p.m. average is “close enough, and just might be optimal. Even if a patient goes home at 5 p.m., that’s better than 8 the next morning.”

Early data also indicate that patient outcomes are good, at least from the standpoint of readmissions.

Problems with patient flow
Despite the unit’s early success, Dr. Landler says that challenges remain, particularly in areas like staffing. Admission-volume fluctuations can wreak havoc. While having two hospitalists during the day works out in principle, problems develop when ED patients begin flooding the inpatient units in the afternoon.

On a busy day, the short-stay unit will handle 10 to 15 admissions. “We can’t predict flow to the unit,” Dr. Landler says, “but it tends to be toward the afternoon, because of the way our ED “or any ED “works. By the time patients get triaged and tested, it’s afternoon.

Our goal is to push our discharges earlier in the hope that it will push our admissions earlier.” Two nurses who work for the unit as patient care coordinators (not floor nurses) play a key role in that effort. Besides commandeering the timing of tests, the coordinators help manage discharge planning and instructions and provide disease-specific patient education.

Having coordinators has been “a major contributor to the unit’s success,” Dr. Landler notes. The unit recently added a nurse practitioner to help hospitalists during crunch times and to work independently with lower-acuity patients.

Making the case for more staff
The unit has also had to overcome nursing staffing issues as well. Nursing managers often assign night coverage nurses based on unit census at 3 p.m., so the short-stay unit ends up shortchanged during a late afternoon spike in admissions.

To avoid being understaffed, Dr. Landler performed an ADT (average daily admissions/discharges/transfers) analysis to make the case for more nurses. The data showed that the unit’s ADT index was 50% higher than on the medicine units, and that the unit’s admission volume was 42% higher. By focusing the conversation on patient turnover instead of on the number of empty beds, the unit was able to make a convincing case for more nursing support.

One other challenge, albeit minor, is that administration has upped the stakes as far is its goals for the unit. The initial objective was to do a better job with the gray-area patients between ED observation and medicine. Now the hospital wants the hospitalists to take on more of the ED-observation patients, so the hospitalists are taking another look at criteria.

“The good news,” says Dr. Landler, “is that the goals changed in part because of the unit’s success.”

Bonnie Darves is a freelance health care writer based in Lake Oswego, Ore.