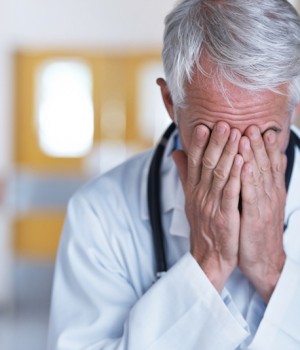 “Why do we need to consult on controlled hypertension? Doesn’t the orthopedist know how to say, ‘Continue home meds?’ ”

“Those *#@%# surgeons could handle this themselves. They just want somebody else to do the discharge summary!”

“If the cardiologist just wants to revise the pacemaker, why does somebody else have to admit the patient?”

AS WE TAKE ON more and more of our hospitals’ patients, it’s not unusual for hospitalists to feel dumped on. Some colleagues act as if they’re incapable of writing an order for Tylenol or handling anything outside their own specialties. Add in the fact that, often, nobody but the ward clerk can tell you why you’re being called, and you start wondering if the extra phone calls and aggravation are worth a small increase in your weekly income.

This is a serious issue, whether you’re building a group or trying to hold one together. One prime ingredient of burnout is the feeling that your efforts are unappreciated, and that may be particularly true for doctors because we started med school with the idea that we would be respected. With physician recruiters advertising everywhere we look, it’s hard even for group leaders not to wonder if the grass might be greener somewhere else.

We don’t always get immediate rewards for stepping up when we’re needed.

The source of our appeal
It’s easy to see why surgeons may want to have somebody else admit patients. Even the most conscientious general surgeon or ENT is sometimes unable to leave the OR when a patient has a crisis (or thinks he does). And office-based doctors, even those whose building is connected to the hospital, hate to trash a half-day’s schedule to transfer a crashing patient to the ICU. Admitting a patient and generating a set of orders not only takes time away from more profitable endeavors, it requires doctors to think about medical problems they may not be comfortable managing.

If you’re in an established practice, the hospitalists who built the group worked hard to gain their colleagues’ trust—and to position themselves as the doctors to call for day-to-day patient care. Not only does your group have a doctor available 24/7, but the nurses and other

Feeling needed
The businessman with the knee replacement had only one-pill hypertension and looked pretty low-risk … until day 3 postop, when his alcohol withdrawal kicked in. His nurse didn’t even bother calling the orthopedist, who is more familiar with propofol than with Ativan, and Mr. DT was quickly transferred to the hospitalist service.

Dr. Pulmonary can very comfortably manage a COPD exacerbation, but he was new to the hospital and wasn’t sure which cardiologist should handle the cardiac tamponade. And surgeons aren’t the only procedure-oriented specialists: When something goes wrong in the endoscopy suite, the gastroenterologist will probably have four or five other procedures lined up after the hypotensive patient, and they are all going to be hungry and cranky.

Those discharge summaries may be a chore, but if you do them the day the patient goes home, they will be available at the follow-up visit (or ER bounceback). But a busy specialist may put off dictating them until she gets a call from the records committee. Even your history and physicals are better because you include problems a nephrologist or surgical specialist may not be used to managing.

Encouraging communication
If you work in a hospital where every consult and inter-service transfer is done by a doctor-to-doctor discussion, tell me where it is so I can move there. In most hospitals, all you get is a call from the unit secretary who may have no idea why the patient was admitted. The best you can hope for is that the patient’s nurse will tell you how fast you need to get there, and maybe the reason for the consult.

Try to get an idea of how urgent the issue is. If you’re starting to run behind, call the referring doctor and warn him or her that it may be several hours before you can see the patient. The fact that he or she didn’t call you directly may simply be due to not knowing how to reach you, or to some other crisis that came up.

Give primary care offices a central number that will  always reach the admitting doctor, and be extremely cordial and appreciative when they call to admit a patient. Point out that stat labs and X-rays are hard to get  on most nursing units, and that the ER is a better place  to determine whether the patient needs telemetry or ICU care.

If a referring doctor knows how to reach you and still doesn’t pick up the phone, protect yourself. Include in your note the time you were contacted and the fact that Dr. Slow’s office staff didn’t call. This goes double if things are going bad fast or if essential information was withheld, which is not uncommon. Maybe Ms. Anemia’s hemoglobin is usually between 9 and 10, so it’s not an urgent concern. But if it was 14 last week, you need to know so you can start a bleeding workup right now.

Phone numbers can be life-saving. Susan Hutchins MD, a hospitalist group leader here in Texas, provides her partners with a list of cellphone numbers for doctors who work often with the group. The tactic avoids secretaries, answering services and other obstacles, and it has improved both the quality and speed of inter-doctor communications.

Protect your self-esteem
As a hospitalist, you have skills and knowledge that other medical staff members lack. Like ER doctors, you may not be expert in most specialties, but you’re there when doctors and patients need you.

Psychologist J. Bryan Sexton, PhD, of Duke University has studied burnout, particularly among physicians. He points out that while we are trained to focus on things that go wrong, it is critically important to remember what goes right as well.

At his workshops, he teaches participants to sit down every evening and write down three things that went well: the nurse who raised the issue of hospice referral, the GI bleeder whose cancer was found early, the party your group threw for a retiring therapist. Just 15 days of “Three Good Things” notes produced a huge improve

The bottom line
We don’t always get immediate rewards for stepping up when we’re needed. We can measure our payoff in the growth of our practice, the way colleagues greet us or the size of our reimbursement.

But the real bottom line is the care we give our patients. Hospitalists have become the doctors to call in every unit of the hospital, and our jobs make a huge difference to everyone.

Stella Fitzgibbons, MD, has been a hospitalist since 2002 and figures she has been dumped on hundreds of times since then.

Thank you for this article! As much as it is in the individual’s best interest to perhaps just turn the other cheek or give others the benefit of the doubt, these strategies can’t always trump “dumping disorders.” I can’t agree more with this sentiment: “We don’t always get immediate rewards for stepping up when we’re needed.” Sometimes those who step up are invisible. Patients can’t always recall specific names as they complete satisfaction surveys. The “Three Good Things” strategy offered by Psychologist J. Bryan Sexton, PhD, of Duke University, is an excellent way for any provider to close out the… Read more »

OBGYN hospitalists are not commonly ”dumped on.” They are service orientated “expert trusted colleagues” who “watch the back” of the other practitioners. Indispensable.

I really appreciate this article. I learned these lessons in my first year as attending. As an IM hospitalist, I like to think of us as the guardians of the hospital and our patients. It’s easy to get bogged down in the negatives, but we get the job done and we should be proud of that.

Perhaps it is just me, but it seems a lot of the documentation that used to be done by medical transcriptionists has simply been adjusted to make doctors, hospitalists, etc. take care of them, which I do not understand. Medical facilities wanted to “cut costs” by eliminating many transcriptionist positions….who made anywhere from $14-19 per hour and what did they replace a lot of it with? They have docs, etc., who earn $100-200 per hour, replacing them. What sense does that make?

Very interesting article, however as experienced hospitalists with decades of experience, our view is that OBGYN hospitalists are not commonly ”dumped on”. They are service orientated “expert trusted colleagues” who “watch the back” of the other practitioners and are true partners within the OB eco-system of all hospitals and patients they have the opportunity to interact with.