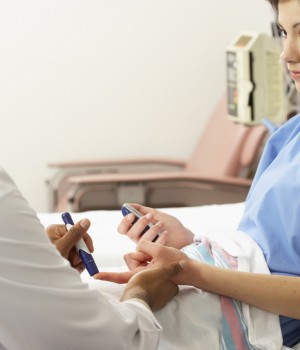 IT’S A COMMON PROBLEM that has significant implications: One in 20 Americans has undiagnosed diabetes, a fact that complicates hospitalists’ treatment and care plans for these patients.

Ann Sheehy, MD, a hospitalist and researcher with the University of Wisconsin Medical Center in Madison, set out with a research team to get a handle on why so many diabetics go undiagnosed. To do so, she needed to take her research outside of the hospital and look at who is being screened for diabetes “and why “by outpatient physicians.

As the lead author of a study in the January 2010 issue of Mayo Clinical Proceedings, Dr. Sheehy combed through a database of 47,000 adult Wisconsin patients. By looking at patients tested according to two prevalent screening guidelines, Dr. Sheehy and her colleagues discovered what they referred to as diabetes screening “blind spots.”

One major blind spot was due to the fact that many outpatient physicians have relied on screening criteria issued by the U.S. Preventive Services Task Force (USPSTF). At least one-third of the patients not covered by those criteria, the study found, were later found to have diabetes.

That’s because the USPSTF guidelines, which many primary care physicians view as the standard of care, recommend screening only patients with high blood pressure.

By comparison, the other set of commonly used screening criteria in the U.S., issued by the American Diabetes Association (ADA), capture more diabetes diagnoses because they are much more comprehensive. They recommend screening everyone 45 years of age and older, and younger overweight patients with an additional risk factor such as ethnicity, family history or other clinical comorbidity like high blood pressure and heart disease. (The study also found that uninsured patients are screened “significantly less often” than those with insurance.)

The good news, says Dr. Sheehy, is that the ADA for the first time this January endorsed an additional diagnostic criterion: an HA1c level of 6.5 or higher, a level that needs to be confirmed with a repeat test. Dr. Sheehy spoke with Today’s Hospitalist about how the adoption of this diagnostic marker “by inpatient and outpatient providers alike “could result in higher diagnosis rates and better inpatient care for both diabetic and non-diabetic patients.

Do you think primary care physicians will move to use the new HA1c diagnostic marker in outpatient screening?

I think it will result in more people being tested because hemoglobin A1c does not require patients to fast. We’ll catch more people because they can just walk down to a lab and get a test done.

For hospitalists, A1c is a great diagnostic tool for the majority of our patients. We’ll now have a pretty good idea of who’s diabetic, although we need to remember that A1c is not accurate in people who are bleeding or transfused, or who have hemolytic processes or several other less common conditions or exposures.

Until now, it has been very difficult to make that diagnosis in the hospital because stress and the counterregulatory hormone surge have such an impact on fasting glucose. In most cases, a second confirmatory test is needed to make the diagnosis, but this marker helps us risk stratify people much better.

How does the fact that so many patients are admitted with undiagnosed diabetes affect you as a hospitalist?

It catches me off guard because I’m not anticipating it. I do not start point-of-care glucose checks or start monitoring patients for adverse complications due to hyperglycemia. It may take me 24 to 48 hours to realize that, “Hey, this person has routine blood sugars in the 200s.”

That leads to a delay in treatment. Several studies have demonstrated that hyperglycemic inpatients without a prior diagnosis of diabetes do worse than patients with diabetes who have hyperglycemia. We don’t know whether this is because in the nondiabetic group, the elevated blood sugar is a marker of illness severity or because patients with undiagnosed diabetes have poor preventive care before they’re hospitalized. We need the diagnosis before patients come to the hospital to sort that out, to figure out how to treat these two groups and to avoid delay in care.

Has does your treatment of those two groups differ now?

It doesn’t. Current recommended targets don’t differentiate between hyperglycemia in patients with or without diabetes, and I try to keep all hyperglycemic patients under 180 while avoiding hypoglycemia. But nobody really knows whether these targets are appropriate for both sets of patients.

It may be that we should not be controlling patients with stress hyperglycemia in the same way we do those with diabetes. Maybe we should control them tighter, or maybe we should leave them alone because that’s the body’s way to adapt to stress. We can’t answer this question with a randomized trial, however, without better defined cohorts.

Since you found such a high rate of undiagnosed diabetes, have you changed your approach to patients on admission?

I have. When people have a glucose in the upper 100s on their basic chemistry panel, I typically send a hemoglobin A1c. Then I order point-of-care glucose checks for 24 hours until I get four readings. If those are normal or below 180, I don’t continue to do checks.

For hyperglycemic patients with no prior diagnosis of diabetes, I think ordering point-of-care checks with 24- hour sliding scale or correction insulin is appropriate. It’s one of the few instances where a sliding scale protocol is probably OK used alone, as you don’t even know if insulin will be needed.

How unusual is it for a hospitalist researcher to be looking at outpatient screening patterns?

It is a bit unusual, but in some ways, I don’t think it should be. As hospitalists, we have a good appreciation of handoffs after discharge, so I think my research is just taking that link in the other direction. What happens in the outpatient world definitely has an impact on what we do.

I collaborate with people in critical care, public health, family practice and anesthesia. Each of us sees a different piece of this puzzle. We have so many questions about this disease that researching diabetes could be a career in itself.

What research are you working on?

The article we’re writing now is looking at inpatient orthopedic patients and the prevalence of undiagnosed diabetes. In these hyperglycemic patients without a prior diagnosis of diabetes, we are also looking at how often that information is reported in their discharge summary and how we send that information to outpatient physicians.

We have a lot more time with patients in the hospital than the primary care physician, often several days in a row. So we have a great responsibility to translate what we learn back to the outpatient provider.