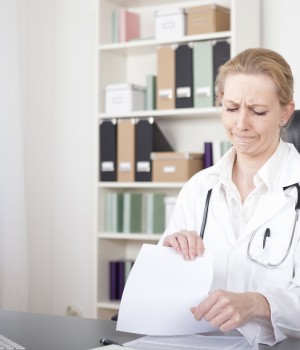 IN RECENT DECADES, hospitals have been run by people with backgrounds in business, not health care. For Roy M. Poses, MD, an associate professor at Brown University’s Alfred Alpert Medical School in Providence, R.I., that’s a problem.

In Dr. Poses’ mind, the increasing power that such administrators have in hospital leadership is allowing market demands to trump more traditional goals, like patient safety and physician wellbeing. As evidence, he points to the contracts that physicians often sign when they agree to work for a hospital or health system.

“Employed doctors’ hands are tied by many contractual clauses,” says Dr. Poses, who is also president of the Foundation for Integrity and Responsibility in Medicine, a nonprofit organization.

“Employed doctors’ hands are tied by many contractual clauses.”

A recent article coauthored by Dr. Poses that was published in the March 7 Annals of Internal Medicine looks at the “growing class of subtle, but protean and pernicious restrictions on employed physicians’ professionalism and autonomy” found in most contracts today. As health care becomes increasingly corporate and market-driven, Dr. Poses points out that these clauses are only proliferating.

Lifting the veil of secrecy
“We wrote the article to raise awareness of these contractual issues,” Dr. Poses explains. “Not much is known about restrictive clauses because contracts may also contain blanket confidentiality clauses. Those make it a contract violation to divulge that the other restrictive clauses even exist.”

A blanket confidentiality clause prohibits doctors  from “publicly discussing their situations or, for that  matter, anything else of significance about the corpo ration that employs them,” he says. Given the over- arching nature of language in many contracts, such a  clause can be invoked to hide medical errors, quality  and safety issues, ethical violations, potential malfeasance, and criminal conduct. Further, “the language may allow penalizing whistleblowers for ‘disruptive behavior’ by terminating their employment.”

In fact, Dr. Poses says, many contracts allow termination of employment for any behavior the employer deems to be “disruptive”—including disagreeing with management.

The Annals article outlines several other insidious provisions that, as Dr. Poses says, “threaten autonomy, patient safety and ethical conduct.” Those provisions also tend to place the financial needs of the hospital or health system above those of patients.

Many contracts, for example, discourage physicians from referring patients to practitioners or institutions not within the hospital system. That practice is sometimes referred to as “leakage control.”

“Patients may not be given the optimal referrals for their conditions,” he says. Last October, he penned a Health Care Renewal post that described three hospital systems. All those systems had recently made large payouts to settle federal allegations that they offered their physicians incentives to refer patients within the system.

And productivity incentives, also built into employment contracts, can increase system revenue but incentivize overtreatment. Noncompete clauses, another standard component of today’s contracts, prohibit physicians from practicing medicine—or certain specialties—within a given radius of the institution.

“A physician who wants to leave the system is forced to move far away, which can rob patients of access to that doctor,” Dr. Poses notes. Many contracts also prohibit engaging in what’s referred to as “outside activities.” Although this ostensibly means practicing during off-hours, “it might be so broadly worded as to prevent engaging in academic activities, writing or exercising free speech.”

When hospitals shake hands with third parties
EHRs are riddled with potential errors that can cause “unintended consequences and even patient harm,” according to a statement issued in June 2013 by the American Medical Informatics Association (AMIA). That report called upon clinicians to monitor these systems, report adverse events, and share information both internally and on the Web.

Dr. Poses notes, however, that hospitals’ contracts with EHR vendors frequently contain “gag clauses” that prohibit hospital employees from revealing problems with EHRs, even those that threaten health care quality or patient safety.

Hospitals also enter into agreements not to “poach” physicians from each other, thereby “limiting job mobility because physicians who work at one hospital cannot be hired by another,” he says. “This increases the leverage on physicians to tow the line.”

Choosing to be employed
Why then would anyone submit to such draconian contracts and become an employed physician?

“I call it the ‘Brave New World’ phenomenon,” Dr. Poses says. “Doctors opt to enter this setting in hopes that the employer will fend off most of the bureaucratic burdens that afflict medical practice, leaving them more time to actually practice medicine or academics.”

Another reason is market domination. “Private practitioners or small groups often feel they are too small to negotiate with huge insurance companies or compete with other doctors who work for big hospital systems,” he says.

“EHRs are nightmares to manage if you do not have a big IT department—and sometimes, even if you do.”

And being employed, he admits, has some advantages. “I was an employed physician most of my career because I wanted to be an academic,” he says. Moreover, a large organization that is well-run and interested in improving patient care “can offer better support from other clinicians, better insurance arrangements and better EHRs. In theory, employment can be better than solo practice.”

He adds that some physicians sign contracts because they are naive about the conflict between the profit-centered culture of contemporary hospital management and their own patient-centered values.

Get a good attorney
“Many physicians are wary of lawyers, but this is unwarranted,” says Dr. Poses. “They are collaborators who are trying to help you. Would you buy a house without a lawyer?”

While a lawyer cannot necessarily negotiate away the most egregious clauses, doctors will at least understand what they are signing. Plus, an employer’s intransigence about amending an unfair clause should be a red flag to take into account before deciding whether or not to accept an offer.

“Many contractual clauses should not be legal and some need to be systematically changed,” says Dr. Poses, noting that the task goes beyond what individual physicians can take on. Ideally, medical societies should provide information and support to employed physicians. But many are unwilling to do so, he adds, perhaps because they receive money from large corporations and have become “more like marketing firms.”

He also urges physicians to band together. “If you are going to go up against an employer alone, you might be looked on as a whistleblower,” he says. “But if you organize a large number of physician collaborators, you stand a better chance.” And an effectively organized group will have more leverage.

Physicians also need to engage with the political system. “Most of us were not brought up to feel comfortable doing this,” Dr. Poses admits. “But to improve things, we have to push for policy changes because many problems are the result of larger political, social and economic issues.”