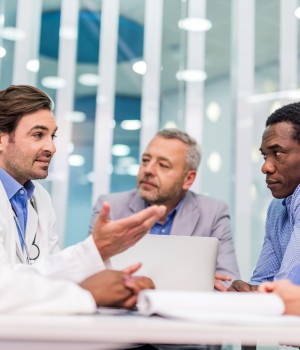 Published in the May 2009 issue of Today’s Hospitalist

Tomas Villanueva, DO, MBA, knows exactly why he wanted a business degree. “I wanted to speak ‘suit,’ ” says Dr. Villanueva, who’s been a hospitalist since 1995. “There was a nomenclature and mindset when it came to the business aspects of hospital medicine that I couldn’t understand.”

Since earning an MBA in 2001, Dr. Villanueva has used it to help steer the 19-physician hospitalist program he directs from being a private practice to being hospital-employed at Baptist Hospital in Miami. But his fluency in business-speak has had one disconcerting side effect: His colleagues occasionally see him, literally, as a turncoat.

“I’ll wear my white coat on the floors, but when I go over to the executive office, I’ll put on a suit jacket,” Dr. Villanueva says. “En route, it’s very common to hear jokes from the physicians: ‘Oh look, he’s being a suit now.’ There’s that misconception that I’m no longer a doctor or one of the guys.”

While hospitalists with both medical and business degrees may struggle to find the right balance between administration and medicine, they’re putting their business skills to good use. They’ve been able to create new program opportunities, negotiate better work environments for colleagues, and act as translators between the disparate worlds of clinicians and executives.

Hospitalists with MBAs bring two distinctly different mindsets to hospital medicine, but they face one complication: Wearing both hats may mean some tough decisions about how to simultaneously pursue both paths “and how much time to devote to clinical care.

Program management
One obvious role for hospitalists with MBAs is as program director. Femi Adewunmi, MD, now directs the 12-physician hospitalist program at Johnston Medical Center in Smithfield, N.C. Having begun the executive MBA program at Duke University’s Fuqua School of Business last year, he plans to graduate this fall.

His business training is already paying off by helping him identify where to cut costs. One item chopped was outsourcing the placement of part-time physicians. “The hospital was spending a ton filling shifts,” Dr. Adewunmi says. “I built up my own team of locum physicians employed directly through the hospital instead.”

Those part-time physicians also allow him to flex up staffing when census figures run high. That’s a plus because his financial forecasting led him to shrink his full-time group from 12 to 10. With two physicians leaving (for personal reasons), he’s not filling those slots.

He’s also reconsidering service lines that he’s avoided in the past. “We already do preop management, but we may start admitting some orthopedic patients,” Dr. Adewunmi says. “It’s a slippery slope, and criteria for doing so need to be worked out. But with hospital volumes declining, we need to evaluate every opportunity to increase revenue.”

For Dr. Villanueva, business training helped him first launch a private hospitalist group, then take that group in-house. He made the move in 2007 based on his read of market indicators. First, the number of un- and underinsured patients was growing in the Miami area, making it harder for a private group to break even taking care of self-pay patients.

At the same time, managed-care capitation payments, which were already lower than in other parts of the country, were beginning to come in slower. “Cash flow was going to be a big problem,” Dr. Villanueva says. And while the economy was still booming, he knew the balloon was going to burst.

“Because of my business background, I knew the market always self-corrects,” he says. “I decided that this was the best time to become employed.”

A different mindset
At Cedars-Sinai Medical Center in Los Angeles, Bradley Rosen, MD, MBA, first used his dual degrees to standardize processes and improve the visibility and administrative support for the procedure center, which is run by hospitalist-proceduralists. He then successfully negotiated with hospital administration to construct a new $1 million procedure center with twice as much space.

He has since applied the analytical abilities acquired at business school to launch and direct Cedars-Sinai’s non-teaching hospitalist service, a program that has grown in three years to 10 physicians and three dedicated nurse managers.

Dr. Rosen points out that many faculty attendings have a more traditional orientation. They tend to focus more on teaching, research and grants than on statistical projections pertaining to cost, utilization and systems of care.

“I do approach things differently,” he says. “The doctoring and the business brains are programmed in different ways.” He can talk with colleagues about clinical cases, on one hand, but then sit in an insurance company board room to discuss performance graphs and review budgets. “I’ve built up both of those muscles through my education and real-life experience.”

Applying business skills
When it comes to patient care, Dr. Rosen says that having an MBA has made him more conscious of the importance of customer service.

From the patient’s perspective, he makes a point of sitting down at the bedside to explain disease processes and treatment plans, so patients don’t feel lost among the multiple teaching points. That emphasis on customer service has also translated into a policy that primary care physicians receive daily phone updates from all the hospitalists about their patients’ clinical status “critical for both a smooth transition of care and as “an essential service to our referring physicians.”

Dr. Villanueva is using the principle of standardization on a new floor that will be dedicated to congestive heart failure patients. “That will help nursing staff become more specialized and will guarantee things like daily weights,” he says. Standardization, he adds, ties directly into quality and efficiency, and “both result in significant cost savings.”

He also credits his MBA with teaching him time management and how to “respect my down time.” Even more importantly, he says, getting business training was an eye-opener in terms of how to build teams.

“When you train as physicians, even though we call it a team, it’s really a hierarchy,” says Dr. Villanueva. When other clinicians are deemed to be less of a team player, “we physicians pretty much isolate them and take on the extra work ourselves,” he explains. “That does not occur in the executive world.”

Instead, business has taught him to communicate with people he might have previously considered “slackers.” “You have to learn whatever teambuilding methods you need to maintain the team.”

How to structure a “win-win”
For Azhar Majeed, MD, MBA, a director with the 20-plus-hospitalist group Southern California Hospitalist Network, one of the most valuable skills he gained from his MBA has to do with negotiations.

Even before he got his degree in 2005, Dr. Majeed says he thought he had a knack for negotiating. But he was very impressed by a concept that his business school teachers stressed repeatedly: “growing the pie together.”

“Unlike your experience as a consumer buying a car where you’re haggling, you have to get to a different level with hospital administrators,” says Dr. Majeed, whose group provides coverage in a half dozen small, community hospitals in eastern Los Angeles county. “The mutual ‘win-win’ is key.”

He brings that concept to his discussions with hospitals at least once a month. The latest example was convincing executives at Citrus Valley Medical Center in Covina, Calif., to award his group the internal medicine back-up call.

“I told them, ‘You want quality and rapid response, and you want physicians to use CPOE 60% of the time, all of which is difficult with private practice physicians,’ ” says Dr. Majeed. “It’s revenue for us, but it’s decreased length of stay for the hospital, and that’s millions of dollars a year.”

Bridging the divide Hospitalists with business degrees also say they play a key role in mending what Dr. Rosen sees as “an historical disconnect” between clinicians and hospital administrators.

Administrators and physicians come “from different tribes,” he points out, “and there’s some bad blood” that’s developed as a result of not understanding each other’s priorities and concerns. Choices that hospital executives make every day, he says, “run the risk of alienating physicians, who are already jumping through hoops to take care of patients or who don’t understand the rules of the game.”

On the executive side, Dr. Villanueva notes that administrators see physicians as “overly emotional beings who cannot be reasoned with. Medicine is very personal, and doctors tend to feel a lot of passion “for a medication, a treatment, even their own work schedule.”

“I purposely calm down even further among the executive staff so they’ll not perceive me as the hyperemotional physician,” he says. Among his physician colleagues, on the other hand, he has to work to dispel the opposite assumption: that, as an administrator, “I start losing my empathy for what it truly is to be a doctor caring for patients.”

But according to Dr. Majeed, administrators appreciate finding physicians with a business degree, seeing in them a “true business partner.” And he thinks the historical adversarial tension between clinicians and executives is evolving away, particularly with the advent of hospital medicine. Before, when medical staff didn’t spend their days in the hospital, administrators made autonomous decisions that fostered mistrust among physicians.

Now, however, “hospitalists are so intertwined with administrators, working on the same initiatives and committees,” Dr. Majeed says, “that you have no choice but to row the boat in the same direction.”

However physicians with business degrees decide to use both skill sets, many will eventually have to deal with what Dr. Rosen calls “the profound challenge of the physician executive.”

On one hand, he points out, if they don’t spend enough time in the trenches, physician executives won’t keep their clinical skills sharp, maintain the respect of their MD colleagues or remember “what they’re fighting for when they step into the board room.”

At the same time, Dr. Rosen says, even though his patient-care responsibilities are half that of his colleagues’, his administrative duties don’t end when he sees patients. Often, his days stretch to 16 hours or more.

Having been trained in business and running a program for three years, he fully recognizes “that it takes considerable time and energy to keep a program on track,” he says. “You can’t be in the trenches as much as your peers without killing yourself, so striking the right balance can be a real challenge.”